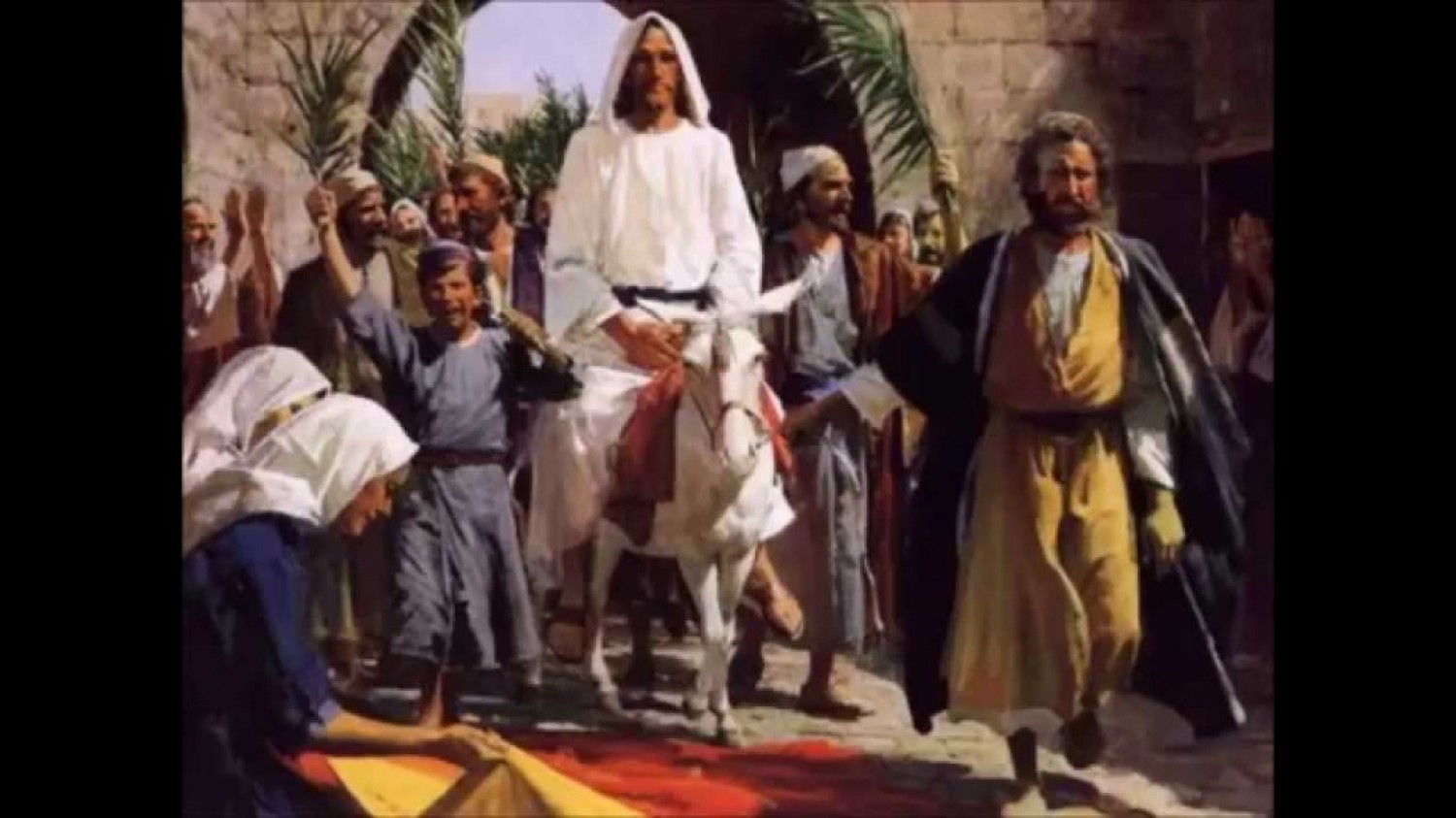 Intr – Take a look and listen carefully to the the words I am showing you in a moment. What’s your first reaction when you see or hear them?

I think I would be right if I say that many of the first meanings that popped up in your minds were a little, or in some cases quite a bit different of what I intended for them for today’s message.

Why is that? Well, someone once said, “You are yourself and your context”. We are not in a bubble. We live in a context with people, ideas, propaganda, educational systems, beliefs, ideologies... Right now we carry different feelings, such as anger, frustration, sorrow; joy, exultation, pleasure. All of these things, and many more, may be conditioning what we see, hear,,, and even what we believe!

Think of the Pharisees hearing the loud cry of the people at the doors of Jerusalem. They most certainly knew who was the one who was coming in. They knew Jesus sufficently to know how dangerous he could be to their system, or rather, to they fears. Then what is that they hear outside, chanted by hundreds?

“Blessed is he who comes in the name of the Lord, even the KING of Israel”

I can imagine what run through their minds when the word KING entered they ears. Their context, their fear, their anger were the cue where that word got into, straight to the center of their arrogant hearts. They were influenced by:

-What they set their minds to;

-Their unbelief – especially this one. They refused to see in Jesus the promised Messiah. Then all they could see was a man trying to trump their position. See, that’s what I had in mind with that word: “To trump is to outrank or defeat someone or something, often in a highly public way” (https://www.vocabulary.com/dictionary/trump )

And their conclusion is quite interesting: “You see that you are gaining nothing”. Now that seems to be the summary of what people think when they look to Christians. “Hey, what are you gaining with it? Going to a Church, worshipping and obeying a King.... You even give money to him, use your time, your gifts. What do you profit from it?”

He is the blessed King who comes in the name of Iahweh to set his throne not on top of a palace, not upon a hill, but from the top of a cross. Now that scene would have been one depicting the king of shame. But what human mind considers to be shame God have chosen to be the accomplishment of His promise. He established his Kingdom in Christ calling us by faith to be a part of it. He calls everybody, no matter our racial background. Even because we know these one, and many other words are used basically for ideological purposes. What we know from the word of God is that we all, Men and Women, belong to one race – humans, in whose place the King gave is own life. We are one in Christ Jesus.

The King has come. So now, what are we hearing about who Jesus really is?

We are influenced by context, people, feelings too. You are you plus your context of life. So who is this king?

-This is an inclusive King, who pays no attention to options people make. Come as you are and stay as you are. After all, he is the King of Love, isn’t he?

-Look, he is watching you. You better obey and please him, otherwise this King might as well smash you under his powerful hand;

-He is the Sunday King. You can go hear him on Sunday but what happens from Monday to Saturday is just real life.

-Well, the Bible? It is a manuscript from the 1st century depicting how religion looked like in the life of a specific people in a specific land. As you read it today you need to do it in the light of our modern and scientifically advanced society. So take it easy my friend about this King and Church ideia. You don’t need to be so narrow minded as to believe so naively in everything they tell you.

Many different examples can be listed to demonstrate how life contexts surround us and how they may influence our life and, in the worst case scenario, our faith.

When we look at the Gospel, we see that the Pharisees didn’t even notice that the same crowd that was taking branches and palm trees and bowing before that king was doing so still impacted by what he did to Lazarus and how he raised him from the dead. They were acting in a context too! And how do we know this? Because five days later most of them were before Pilate crying loudly: “Crucify him!”. See how context and uncontrolled feeelings may influence us? One Sunday you feel happy and you praise the King of Kings. A week later you feel different, then pay attention to what others say and you are delusioned at Him, thinking that he may no being paying that much attention to your life after all. Maybe He is the King of Sunday after all...

Now, at some point we all reject the idea of a King. Specially because our knowledge about kings and kingdoms are largely influenced by Enlightenment authors, fantasy writters and many Hollywood movies that tend to portray them as evil cranky bigots. Maybe not here in Canada and several countries in the world, but surely in many, many others. And, we all don’t like to obey. We want to be free, autonomous, owning our our lives.

But He is the King that is Humble. The Humble King. The King of Israel – which doesn’t mean a specific peace of land in Palestine but refers to His people, every single person who is called to faith in him. If he gave his own life in your place, what else we think he will make for us? On your behalf? He gives his own body and blood for us. He brings His word to us, not only on Sunday, but in everyday Life. He loves us when we less deserve it, because that’s when we need it the most.

We heard in the Old Testament reading that Isaiah the prophet declares: “The Lord awakens my ear”. That could be our daily prayer. “Lord, please, awaken my ear. With your word. So I  better read the context around me and especially read your Word faithfully and truthfully.”

Jesus is the King. Your King. By faith he opens your ears, our heart, our lives, to see who He really is. In the Epistle lesson, Philipians 2 we saw The King who humbled himself. He wanted to please the Father in our place so we might have the name that is above all names.

In Him we have the context we need to remain rooted in His Word, living faith in daily life knowing that no human context can change the truth of His love. He forgives our hearts, nourishes our soul. He sends us to the share His Good News in a world full of contexts, feelings, fears and frustrations.  Full of people needing desperately to be loved and cured. Even we we think they don’t deserve it, from our standpoint. We need to love people as Christ did: when they deserve it the least because that’s when they need it the most.

He sends us to show the world the real meaning of his words. The actual meaning of his death and resurrection. What does it mean to be a person with prosperity and peace – in CHRIST! And what does it mean not to be fearful of Thanatos. Do you know what this word means? Maybe this is one of the words that actually meant nothing to you at the beginning of the sermon. It means death, In Christ, we don’t need to have PHOBIA – irrational fear – of death, because we have a home in Heaven, forever.

We don’t need to let fear, frustration, anger, despair or arrongance determine the meaning of the main words for our life. Word and Sacraments are the real translators of what does it mean to belong to the King, to His Kingdom, to serve him in freedom of faith and binded in His love.

Cc – Yes, Jesus is the KING. He trumpe satan and sin so that we can get rid of phobia – irrational fear - of punishment and thanatos, death. We have HOPE and PEACE. For our King, in the context of his Word, gives us the words that make us wise unto salvation. Hosanna. Blessed is HE who comes in the name of the Lord, even the King of Israel! Amen.