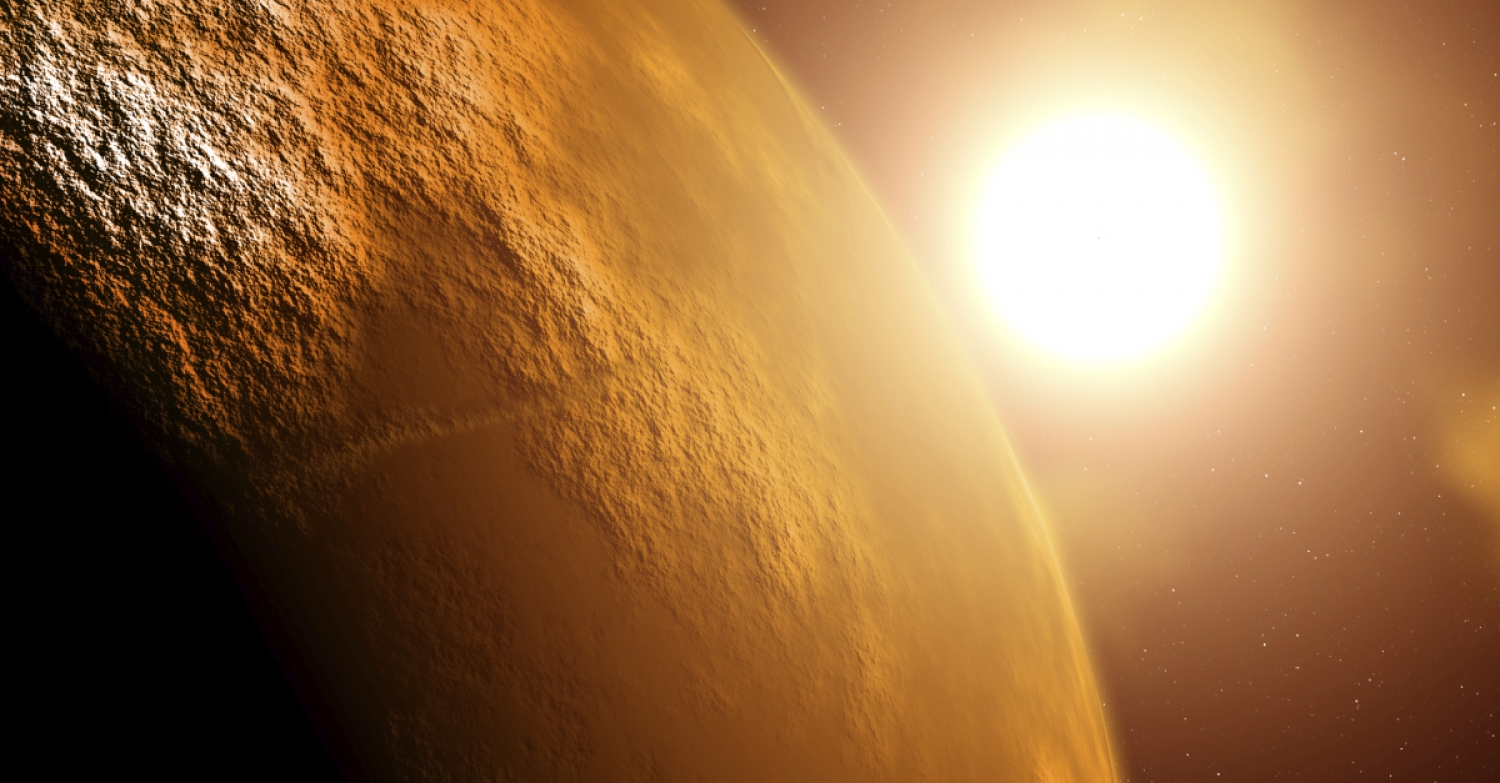 Text: Luke 2 – Christmas Eve
Theme: The One-Way trip
___________________________
Intr – Launched in 2013, it attracted more than 100,000 people eager to enroll and participate in it. It was billed as an adventurous, game changing, innovative project. They call it Mars One. What is it all about? Well, it is about a trip to Mars. The objective is to select and prepare 24 people that will undertake the never to be modest mission of colonizing the Red Planet. Those 24 people will embark on a trip to the planet next door, which sounds like a fantastic, once in a lifetime opportunity.

But here is the thing about this experience: it is a one way trip.

Whoever has paid the 40 American dollars enrollment fee and, after all the tests, would make it to the 24 chosen ones to buckle up and rocket away to Mars knows that they will never come back to Earth again.

“Hum, that’s interesting” I can almost hear right now. “There’s a handful of people I’d gladly pay their ticket to ride on that trip”. Maybe a couple names just popped up in your mind (perhaps your or my name would pop up in someone else’s mind. Who knows...)

Now, this leaves us with a couple questions as food for thought. Why on Earth would more than a hundred thousand people want to right away abandon our Planet altogether? Would they think, or would we think, that to live in a completely different place, actually, a completely different planet would be more promising, happy, inspiring? On another topic, are there among those hundreds of thousands of volunteers those who keep telling the world that they have “lost faith in humanity” and would like to accomplish the dream of restarting it all over again - perhaps in a new world?

What I sense observing how things are going is that the “no faith in humanity” thing has become a hip. Everyone else thinks that everyone else’s attitudes are intolerant, hypocritical, and harmful. Everybody thinks that everybody else is an individualistic, consumist, self-centered hedonist person who lacks compassion for their neighbour and that’s why humanity is rotten and so full of problems. Actually, Humanity is lost. Perhaps someone who would make it to the final list might say: “So now, this is the perfect opportunity to create a new and better world, since us 24 here are not that type of people. Let’s get away from here and start it all over again.” Talk about being pretentious...

So, the problems I see all around are from a “Society” or humanity” to which I don’t belong? Then I and my 23 pals here will be the ones who can start a new and better offspring... Yeah, right. You don’t need very much to make this theory crumble down. All it takes is one of those other 23 to be a neighbour I dislike, a religious guy I don’t tolerate. The guy who hit on my girlfriend or the girl who had stolen my boyfriend. The big mouth guy who keeps posting those intolerant things or that cool lady who wants everybody else but her to share their stuff with the poor... You get it. Those 24 elected are part of the same society as we all are. They will take to Mars the same essence we have here all over. They will bring with them sin and its consequences, including death, wherever they may go. Do we think our moral superirority is such that we can go to a different planet and start there a better world for all that the one we already have here? Now the Pharisees of Jesus’ time wouldn’t have disagreed with the essence of that speech...

At Christmas, we celebrate the exact opposite to that. At Christmas we celebrate the Son of God taking His trip right to the heart of the Earth. God could have thought that way, that is, He might have come to the conclusion that, since Humanity is rotten by sin, completely lost in its ways, there’s no reason to place efforts here anymore. He might have “lost His faith in Humanity.” He might have thought of restarting over again; to leave the Earth behind, and try something new in Mars, in Uranus, perhaps even outside the Milky Way. But He didn’t. He decided to send His only Son in His trip to this Earth. Jesus Christ came to walk this Earth, to be in this World, to be a part of our society. Christ came to save this World. He didn’t abandon the Earth, but came straight to it, to be a part of our lives. He came to bring hope and salvation to a world most certainly broken and rotten by sin and death mankind. He didn’t look away, but decided to see things through our humans’ eyes.

The Baby of the Manger became the Proclaimer of Repentance and Forgiveness. The Proclaimer became The Man on the Cross. The Man on the Cross became The Risen Lord. All of this on this very same Earth you and I step our feet every single day. He came to a fallen World because He loved the World. He came to the Earth because here is where His Father placed humanity. He didn’t want to be in any other place in the whole universe but our Planet. He wanted to become one of us. He wanted to walk with us, to smile and cry like us, sleep and run like us. He willingly gave His life the way none of us could do, so that the whole Earth may come to know that He is the Way. The One Way.

He loves us no matter where we are, even if that Mars One trip comes true. And I mention the “if” because there’s lots of criticism of the mission. Even some of the 100 pre-selected volunteers have been pointing out the problems, some are even calling it a scam. The date for the trip has been delayed again from 2026 to 2031. The Mars One leaders guarantee it will happen; who knows, that might come true. But even if some of us leave the Planet to live there, Jesus will still love them. That is the assuredness that knows no time and place. Actually, if there is something they should want to take to Mars with them it would be God’s Word, His love and forgiveness, so that they may live as real humans who need a real God, everywhere and anywhere.

Now, let’s concede that those volunteering for that one way trip are doing that out of love for science and in a desire to sacrifice one’s life for progress’ sake; they are going that far on behalf of the future of mankind. Not too bad then. If one thinks that’s a mission of a lifetime then possibly one of those 24 seats would be a passport to an unprecedent legacy. When we look around though, we see lots of earthlings who need care, love, and kindness. There are many people around us who feel lonely, sorrow, depressed. There are many people losing faith in humanity, losing faith in themselves, losing faith in God. People who need forgiveness. People who need to connect or to reconnect with the Savior born in Bethlehem that brings Peace on Earth – not on Mars – peace on Earth. We see even a Planet, an environment that cries aloud for help against its predatory, expendable exploration and the running of its resources.

The bottom line is that we don’t need to look to the sky to look for an opportunity to leave a legacy to mankind. All we have to do is to look around. Jesus sends us to do a once in a lifetime trip…to the Earth. To our city, to our neighbourhood, to our own family. Perhaps we won’t change the world, or we won’t be known worldwide. But I am sure we will make the difference in someone’s world, with the Gospel of Hope in Christ. It points us to spread this Hope and care over Earth’s surface, while we await for our One Way trip straight to the arms of the Savior. That’s when we’ll for sure leave this World behind to live in the New Earth and New Heavens.
By the way, if we would say that this one way trip is the perfect opportunity to restart, to explore, and to be different... that is quite ironic. Because that trip already exists. We do have an option of a one way free trip to a better place. Not only better, but actually perfect. It is not only for 24, not even for 100 thousand. It is for everybody. It is the trip to eternity.

Cc – Christmas time brings us the Baby Jesus in the Manger. The Son of God who decided to become Son of Man. The One Way to God. The One Way to the peace, forgiveness and love we desire for our lives and for the lives of everyone. This news is not only for 24, neither only a hundred thousand, nor even for just one million. It is for the Whole Earth – and even outside her if that would be the case in the future. Rejoice! Jesus is Born! The One King, the One Saviour, the One Way to the Father comes to grant us the possibility to live in the Father’s Hands. And I guarantee you: in the whole universe there is no better and safer place to be.Amen.