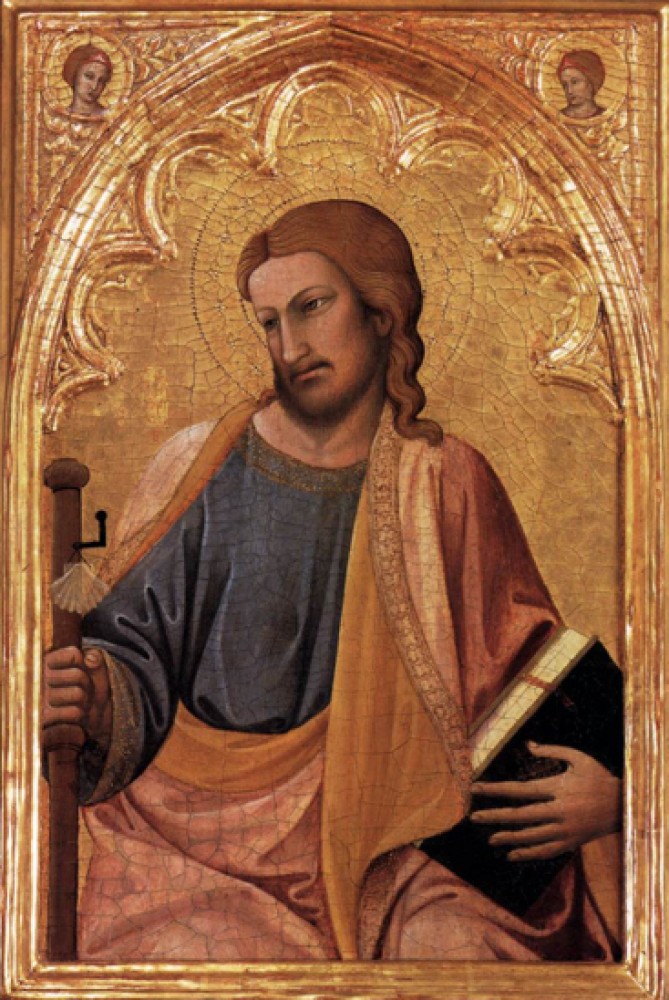 Our sermon text this morning is found in the book of James in the New Testament, chapter 3, verse 17. James says:

...the wisdom that comes (down) from heaven is first of all pure, then peace-loving, considerate, submissive, full of mercy and good fruit, impartial, and sincere.

So what do you think? What is it that makes the Christian faith unique? It's simple. It’s Jesus Christ. We Christians are people of the Book. By God’s gracious enabling, we live by standards laid out for us in God's Word. Our way of life is  based on God’s word. Most Bible scholars are of the opinion that the book before us this morning was written by James, the son of Joseph and Mary, the half-brother of Jesus. James was one of several half-brothers of Jesus. This James was a leader in the Christian church in Jerusalem.

At first, James didn’t believe Jesus was the Messiah. According to the Gospel of John, chapter 7, verses 2 through 5, James and Jesus’ other brothers challenged him and misunderstood his mission. As time passed, however, James did come to understand who Jesus was and why he had come into the world. As time passed, James became leader in the Christian community at Jerusalem. At that time, he was known simply as “James, the brother of Jesus.” James was one of the people Jesus appeared to after his resurrection. Historians tell us that James was martyred in 62 A.D.

The book of James could be one of the earliest written documents in our entire New Testament. That’s significant because it gives us some important insights into issues that were important in the Jerusalem church at that time. Back then, in Jerusalem, most Christians had a Jewish background. They were not Gentiles like you and me. James wanted Christian people to live out their faith in a God-pleasing way – every moment of every day. In the letter before us this morning, James speaks of many things. He speaks of testing, and how Christian people are constantly tempted to bring the worlds ways into the Christian community and into their own lives. In this letter, James describes a practical faith marked by integrity and service. James speaks of the importance of hearing God’s word and doing God’s will. He reminds us that suffering is sometimes part of the Christian experience.

James also describes the the power of the tongue – for good or for evil – to heal or to harm. He warned Christian believers not to allow conflict to establish itself in the church, hindering its mission and its outreach. James wasn’t discouraging an open expression of opinions, which is necessary for a healthy church. Instead, he was describing envy and selfish ambition, which have no place in the Christian church. James talked about the danger of wandering from the faith and the danger of wrongful pride.

James encouraged Christians to be peacemakers, conciliators, able to calm troubled waters. James encouraged Christian people to be considerate of the opinions of others, and to make sure that everyone in the community is heard when important decisions are made. James knew the human heart – what it was like before Christ got hold of it, and what it was like afterwards. He wanted Christian people to have e their congregational house in order, so that they could get on with the Great Commission – the great task of preaching, and teaching and administering the Sacraments – taking God’s word of Law and Gospel out into the world.

James has much to say about wisdom and that’s what I want to focus in on this morning. God's wisdom, says James, is very different from its counterpart in the unbelieving world. Our world has accumulated a great deal of information related to science and technology – and if you know me, you know that I have nurtured a lifelong interest in science – especially in its relationship to religion. There’s no doubt about it. Science has made life easier for all of us. Our world is technologically advanced. We have amassed much knowledge about many things in the natural world. But, in many ways, that knowledge hasn’t been matched in our relationships with others.

The wisdom that James describes is spiritual wisdom. It won't "fix" your T.V. or your microwave or your misbehaving computer. But it can definitely "fix" your spiritual life. The wisdom James is talking about enables us to live according to God's will. It brings true peace and heartfelt joy. It brings unity to the church. James addressed his remarks to Christian people. It seems that worldly wisdom was causing trouble for God’s people. The people that James wrote to were Christians – they trusted Jesus Christ as their Savior from sin – and He was the Lord of their lives. They were Christians, but they weren't always wise. We Christians live IN the world. But we must not be OF the world – in other words letting the world dictate how we live or what we believe.

There are 108 verses in the book of James. And 54 of them – exactly half – contain  what are called "imperative verbs." An imperative is something we are obligated to do. It's not an option, it's a requirement. So, according to James, godly wisdom is a requirement for all who trust Jesus Christ as their Savior and Lord. We need to remember that when James is talking about the "world," he's not talking about humanity, created by God. We are to love that "world.” As a matter of fact, God loved that "world" – those people – so much that he sent his Son to die on a cross for their salvation. In addition, when James is talking about the "world," he's not talking about this planet, created by God. God calls us to be good stewards of this material world. As Christians, we are to love the people of this world. And we are to wisely manage the physical resources God has given us. The "world" James is talking about this morning is the "world" of unbelievers, the world turned away from God. The "wisdom" of that world causes great harm to the Christian church.

First John, chapter 2, verse 15 says:  Do not love the world… [and here again, the apostle John is referring to the world of sinners turned away from God]. John says…

Do not love this world or anything in it. If anyone loves the world, the love of the Father is not in him. For everything in the world – the craving of sinful man, the lust of his eyes, and the boasting of what he has and does – comes not from the Father. The world and its desires pass away, but the one who does the will of God lives forever.

The fear of the Lord is the beginning of wisdom, but fools despise WISDOM and discipline.

The wisdom James wants us to avoid is "friendship with the world." This kind of wisdom often leads to "bitter envy and selfish ambition." James says that "selfish ambition" can destroy what God seeks to accomplish. Now, don't get me wrong. Ambition, in and of itself, isn't necessarily wrong. There is such a thing as godly ambition. Ambition can be the driving force in a person's life. If it's godly ambition, if it's in line with God's will, it’s a good thing. But if it's selfish ambition, it’s not. James says that worldly wisdom causes "disorder and every evil practise" in the church.  It fosters disunuity. It causes people to be angry with others. Worldly wisdom – and the conflict that it so often causes – can keep God’s people so busy and so preoccupied – that they have no time left to reach out with the Good News of Jesus Christ.

God's wisdom is very different. James describes God's wisdom in chapter 3, verse 17.  Godly wisdom, he says, is first of all, pure. Godly wisdom was described by Jesus himself when he said, "Blessed are the PURE in heart, for they shall see God." God's wisdom is peace-loving. It's willing to compromise over non-essential issues. It brings healing to broken relationships. It’s considerate. Some Bible translations use the word "gentle" instead. Consideration and gentleness are at the very heart of God's grace – his love for us and for the world. He wants us to be gracious, as he is gracious. Wise Christians, like their heavenly Father, are fair in their dealings with others. Wise Christians are tolerant. They are willing to work with people where they’re at, knowing that it is God, by the power of his Holy Spirit, who changes people, if they will only let him do that. Wise Christians, as one scholar says, have "the ability to extend to others the kindly consideration that they would wish to receive themselves."

Godly wisdom is submissive. Some translations use the word "reasonable" here. This word has – at its root – the idea of being easily persuaded. A wise Christian, confronted with a problem or a choice, is easily persuaded – by God's word, and not by the "wisdom" of this world. Wise Christians are easy to get along with. They are humble – not pushy, or arrogant, or rude. Wise Christians according to James, are gentle. When it comes to the basics of the Christian faith they are firm. But even then – they always speak the truth – IN LOVE. Their dealings with others are marked by gentleness and respect.

Godly wisdom, says James, is full of mercy and good fruit. Worldly wisdom often leads to cynicism and sarcasm. But God's wisdom is marked by compassion and caring. Wise Christians show mercy even to those WHO HAVE BROUGHT THEIR PROBLEMS ON THEMSELVES!

Worldly wisdom says: "You’ve made your bed. Now you have to lie in it."

Worldly wisdom says, “It's all your fault. There's nothing I can do for you, now."

Godly wisdom says: "God loves you, as he loves me, despite our sin. God's Holy Spirit is prompting you to hold out the hand of faith and to receive His gift of forgiveness and eternal life. Your sin, like mine, is great. But God's forgiveness is even greater. Let him forgive and cleanse you. Let him give you a new start in life. Let him bring you healing.”

Grace is the central concept of the Christian faith. Grace is at the very heart and center of God's will for the world. Grace is the clearest expression of God's incredible wisdom and love. And grace is most clearly seen in the cross and empty tomb of Jesus Christ. God, in his great wisdom, has chosen to be gracious to each one of us, despite our sins and despite our selfishness. God, in his great wisdom, has chosen to do – for us – what we could never have done for ourselves.

"If any of you lacks wisdom, he should ask God, who gives generously to all without finding fault, and it will be given to him."

Jesus Christ is this world's only Savior from sin. May His wisdom and grace continue to transform us. Amen.

Let's pray: DEAR HEAVENLY FATHER – Through your Word and the Sacraments, grant us a full measure of your gracious and healing wisdom. Amen.