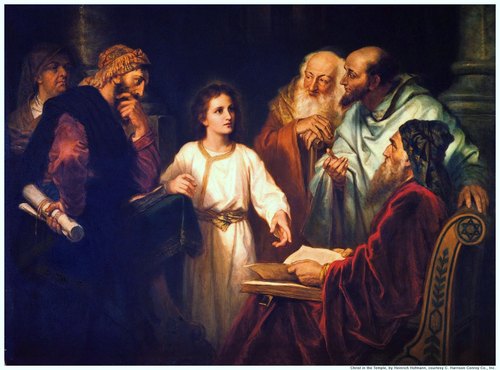 And the child grew and became strong, filled with wisdom. And the favor of God was upon him.

41 Now his parents went to Jerusalem every year at the Feast of the Passover. 42 And when he was twelve years old, they went up according to custom. 43 And when the feast was ended, as they were returning, the boy Jesus stayed behind in Jerusalem. His parents did not know it, 44 but supposing him to be in the group they went a day's journey, but then they began to search for him among their relatives and acquaintances, 45 and when they did not find him, they returned to Jerusalem, searching for him. 46 After three days they found him in the temple, sitting among the teachers, listening to them and asking them questions. 47 And all who heard him were amazed at his understanding and his answers. 48 And when his parentssaw him, they were astonished. And his mother said to him, “Son, why have you treated us so? Behold, your father and I have been searching for you in great distress.”49 And he said to them, “Why were you looking for me? Did you not know that I must be in my Father's house?”  50 And they did not understand the saying that he spoke to them. 51 And he went down with them and came to Nazareth and was submissive to them. And his mother treasured up all these things in her heart.

52 And Jesus increased in wisdom and in statureand in favor with God and man.

Grace, mercy, and peace from God the Father and Christ Jesus our Lord.

Dear brothers and sisters in Christ, I have a memory of when I was 5 or 6 years old.  My older brother and I were misbehaving.  Our mother had asked us to do something and we disobeyed her even though she repeated herself a number of times.  Finally, my mother got tired of repeating herself to two ill-behaved young boys.  She sat us down at the kitchen table and gave us each a stack of notebook paper and a pencil.  She told us to write down the Fourth Commandment ten times each.  I protested somewhat trepidatiously, “But I don’t know the Fourth Commandment!”  My mother set upon the table a Small Catechism opened to the Fourth Commandment: “Thou shalt honor thy father and thy mother, that it may be well with thee, and thou mayest live long on the earth.” (Today’s translation of this commandment states it more succinctly: “Honor your father and your mother”).

Despite the prominence God gives to this First Commandment, parents who spend every waking hour enforcing the Fourth Commandment can forget the importance of God’s greatest commandment.  Mary and Joseph seem to fall into this camp.  Mary says to Jesus: “Son, why have you treated us so? Behold, your father and I have been searching for you in great distress.”  But Jesus did not dishonor his parents.  He did not break the Fourth Commandment.  Jesus responds to his mother: “Why were you looking for me?  Did you not know that I must be in my Father’s house?”  Mary could not pass off her and her husband’s own negligence to Jesus’ breaking the Fourth Commandment.  Jesus honored his parents, but more than that, he honored his Father in heaven.

Jesus is the only human being in the history of the world to perfectly keep the First Commandment.  He loved the Lord, his God, with his whole heart, with his whole soul, and with his whole mind.  Whatever you fear, love, and trust in most is your god.  Jesus fears, loves, and trusts in the true God and in him alone.  Now, we know that Jesus is the true Son of God, who has loved the Father perfectly from eternity, yet we also know that Jesus is true man.  Our text begins and ends noting that Jesus grew and became strong, and filled with wisdom.  Jesus was and is a human being in every way that we are.  He worships his heavenly Father not only as the one who did not create him, but from whom he is begotten from eternity.  Jesus also worships his heavenly Father as the One who created his human flesh, blood, and soul and who preserves them.  Jesus has physically joined our human race and as a human, he submits to God perfectly.

No other human being has ever done this.  Adam and Eve rebelled against God.  The people of Israel constantly sought after false gods.  Even King David, who wrote wonderful Psalms of trust toward God, and who trusted in God when facing both Philistine giant and King Saul, after God had richly blessed him put his trust in his army and ordered a census against God’s will to measure his strength according to men and not according to God.  The constant transgression against God’s great commandment has been consistent among humans with no exception, except for Jesus.

Today people constantly find things to fear, love, and trust in more than God. They make money their god. Those who have plenty of money feel secure in it.  Those who are lacking money think that if only they had more money, then their problems would be solved.  People work like busy beavers trying to get more money to trust in.  They neglect prayer, devotions, and even regular worship where God gives them Jesus’ gifts from the cross.  They forget that God wants to bless, protect, and support us in every need.

But money is not the only idol that draws people away from God.  People love their leisure activities more than God.  They even neglect Jesus’ service in worship to attend games and practices.  And they cause their children to do the same, teaching them that sports or vacation are more important than God’s Word.  As long as distractions exist, sinful humans will find false gods to worship.  The greatest commandment proves to also be the most broken commandment.

The Fourth Commandment extends beyond biological or legal guardians.  Children should also respect their teachers, coaches, and pastors.  When we obey the law of the government we honor the authorities God placed over us. According to this commandment we should respect and obey police officers, judges, and all ministers in government.

Martin Luther also teaches in his Catechism that according to this commandment people should also honor their spiritual fathers.  As God gives fathers and mothers, and governmental authorities, he also gives pastors to shepherd his flock.  When they speak God’s Word, God wants his people to listen to them as if Jesus were speaking himself.[4]

This Fourth Commandment is a high order.  It is difficult to uphold.  In fact, not a single human being on the face of the planet has ever kept this commandment perfectly except Jesus.  None of us can say we have always honored our parents.  We do not fully keep the law of the land either.  And we hate it when pastors bring up our sins.  I stated earlier that nearly every child learns the Fourth Commandment before all others.  Please do not understand me to say that children learn to keep the Fourth Commandment.  My brother and I did not keep the Fourth Commandment after we exhausted our hands and short-lived attention-spans copying it down!  We were more aware when we were breaking it, but we continued to break it.  The Fourth Commandment, like the Law in general, gives us knowledge of our sin, but it does not make us sinless.

Only Jesus fully kept the Fourth Commandment.  Jesus who created his mother and step-father in their mothers’ wombs, now sharing their flesh and blood submits to them.  He went back to Nazareth with his parents according to their will and he submitted to them.  He did not dishonor them, not once.  He did not talk back.  He didn’t throw a tantrum.  He never told them he hated them.  Even at his death, Jesus honored his mother when he told the disciple whom he loved to be Mary’s son, so he would take care of her in her old age.[5]

So we see two things quite plainly. One: We break the commandments often.  Two: Jesus kept all the commandments perfectly.  But Jesus is not like that kid in the class who raises the bell curve and makes everyone else look bad.  Jesus became a human, and humbled himself before God and man for our sake.  He honored God and his parents in order to save us. He is that sacrificial lamb without spot or blemish.  He comes before God’s judgment without any sin of his own, but bearing the sins of the entire world.

This is called the Great Exchange.  Jesus never sinned. We sin often.  Jesus is righteous by himself, because he is God and keeps the commandments.  We are unrighteous and break the commandments.  Yet when Jesus hung on the cross before God’s judgment, he was judged for our sins.  Although he never failed to love God, he was punished as an idolater.  Though he always honored his father and his mother, he died a rebel’s death.  Yet, we who fail to love God every day, and who rebel against our parents and other authorities God placed over us, stand before God without spot or blemish.  We stand before God in robes of righteousness.  Jesus exchanged his righteousness for our sins and his crown of glory for a crown of thorns.

God’s commandments show us our failings.  But Jesus freely gives us the credit for his obedience to the Law.  When God looks at you through Jesus, he sees an innocent child of God.

There is one last point I’d like to leave you with. When Mary and Joseph discovered that they had lost Jesus, they spent three days looking in all the wrong places for him.  When they finally looked in the Temple, Jesus said: “Did you not know that I must be in my Father’s house?”

Now, there is no longer an earthly Temple to make sacrifices to God, because Jesus sacrificed himself once and for all.[6]  Jesus is our Temple.[7]  However, people today struggle with a similar problem as Mary and Joseph did.  They want to find Jesus.  And they look for him in all the wrong places.  They look for him in nature.  They look for him in the universities.  They look for him in reality TV personalities, books, or in their own attempts to fulfill the Ten Commandments, or even their own imaginations.  But, if you want to find Jesus, look to where he promises to be.[8]  Jesus promises to be where his Word is taught in its truth and purity and where his sacraments are rightly administered.  Where the Gospel is: the message that Jesus paid the price for all our sins and freely forgives us that is where Jesus is.  Where Jesus’ sacraments are administered for the forgiveness of sins that is where Jesus is.  Trees and streams may express the glory of God, but they do not disperse the forgiveness Jesus won for you on the cross.

Let us love God with our whole heart, soul, and mind.  Let us honor our parents and other authorities.  Yet even more than this, let us pick up our failed attempts to keep these two commands and lay them on Jesus.  And let us accept Jesus’ free gift of forgiveness and righteousness, which he earned for us.

Our works cannot salvation gain; They merit only endless pain.  Forgive us, Lord!  To Christ we flee, Who pleads for us endlessly.  Have mercy, Lord![9]