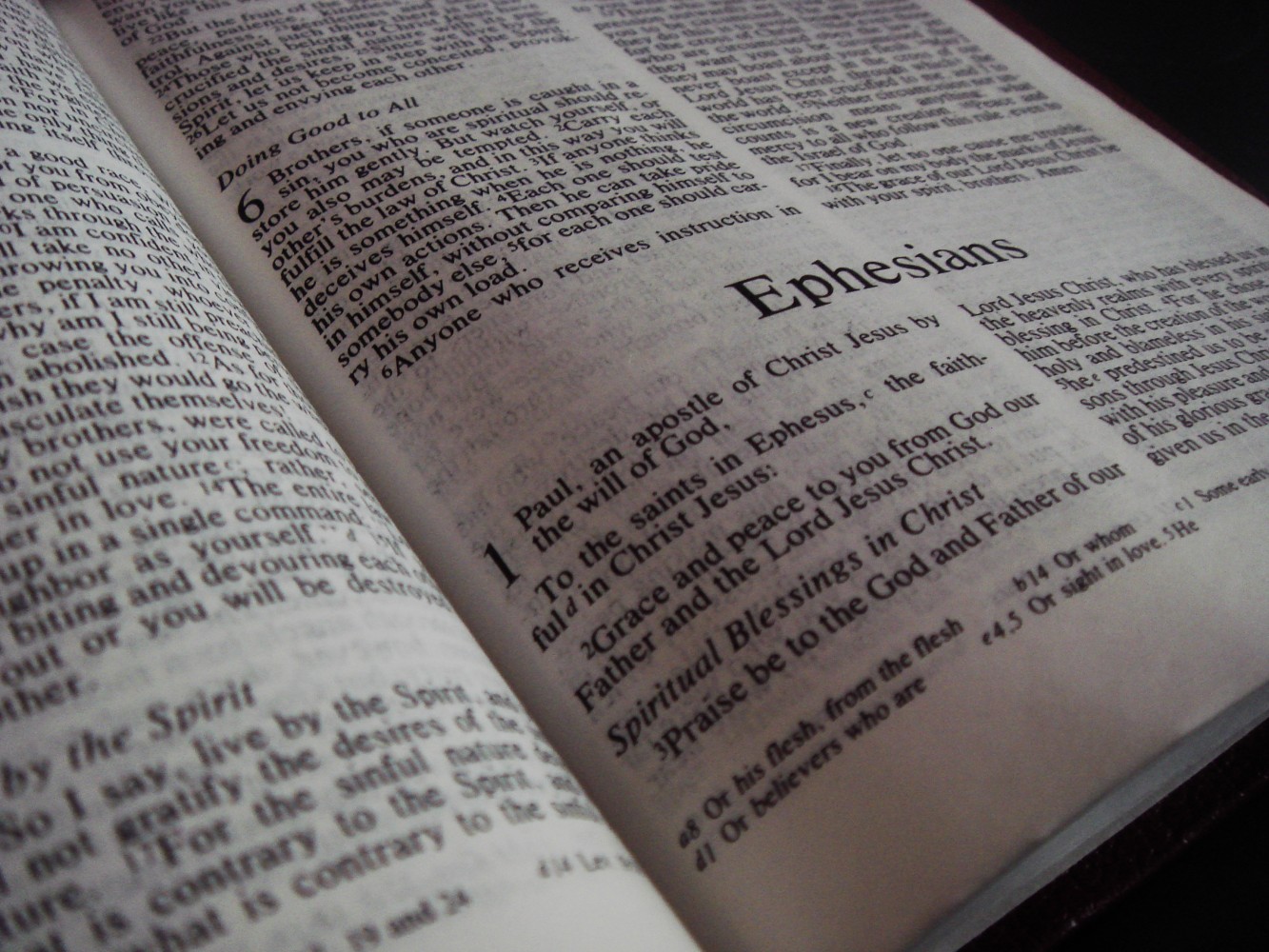 Our sermon text for this Second Sunday after Christmas is found in Paul's letter to the Ephesians, chapter 1. I’m reading verse 18, where he says:

I pray that the eyes of your heart may be enlightened in order that you may know the hope to which he has called you... (N.I.V.)

Today's sermon text immediately follows the text from Ephesians that was read for you earlier. It goes to the heart of a problem that we've had for a very long time. People in every generation want to know two things - they want to know if there's a God, and if there is, what he’s like. John's Gospel, chapter 1, verse 18, says:

No one has ever seen God, but the one and only Son, who is himself God and is in closest relationship with the Father, has made him known. (N.I.V.)

John's Gospel tells us that no one has ever “seen” God. How then are we to know what he's like? The Bible reveals that our God rolls up his sleeves and gets dirty with the sins of the world. Our God does the work of washing, and building and repairing a broken humanity. Our God is willing to sacrifice to get things done. He’s willing to make tough decisions that aren't always popular. Our God comes to us and blesses us through his Word and the sacraments. No one has ever “seen” this kind of God before.

The problem is that the world didn't recognize him, and still doesn’t. John, chapter 1, verse 10 says:

"He was in the world ... the world did not recognize him.”

God, the One and Only, didn't conform to people's expectations. He didn't measure up to their standards, their beliefs. People were looking for a God in their own image, a God fashioned according to their own understanding and desires. That’s why "no one has ever seen God." You might want to call it astigmatism of the soul. Cataracts over the heart, perhaps. People have near‑sighted wants without a far‑sighted faith. People see what they want, not what they need.

If you want a glimpse of "hearts that see," last Sunday's Gospel lesson has an example. It described Simeon and Anna, a righteous and devout pair. Each one had been patiently waiting -- year after year -- for the consolation of Israel and for the redemption of Jerusalem. Over a long lifetime, Simeon had seen religious fervor come and go. Anna, too, had seen so‑called prophets rise and fall. For many long years, their hearts had been longing for the Lord's Christ. The fulfillment of Simeon's promise -- and the answer to Anna's prayer -- takes more than simple eyesight to see.

Hope is central in our text this morning. Hope is at the heart of Paul's concern for us. Everything Paul says is

In a sense, Paul’s whole life-experience explains what he’s talking about. The ability to see with the heart comes from a God who pours the gift of faith into our hearts. This faith brings a divine “in‑sight” of the heart – a divine “in-sight” that produces the kind of hope that doesn't disappoint. The faith in our hearts can see further than our immediate physical surroundings. It can see all the way through this life to the eternal promises of God on the other side. That "inner" sight, the sight we receive from God – in other words, our faith -- produces a hope that works for today! It works in the real world of pains and problems, struggles and sorrows. That heaven‑sent hope says, in the voice of God, "Remember, you are holy and blameless in my sight." Knowing that God sees us with a heart of love, even in the tight spots of sin, gives us the assurance we need to make it through today, and tomorrow. God looks at us in grace. It’s a choice he made before the creation of the world. In Christ, according to Ephesians, chapter 1, verse 4, we are holy and blameless in God’s sight. So our being saved depends, not on our eyesight, but on God's, not on our heart, but his.

God wants to rescue his people and his heart sees just what's needed. So he chooses to find us. Think about this: Adam and Eve were hiding in the garden. God called out, "Where are you?"(Gen 3:9). Cain had killed his brother Abel. God asked, "Where is your brother Abel?"(Gen 4:9). Did God really not know these things? Was he really having trouble seeing where his people were? Of course he could see them! He could see them with his eyes, but he chose to look at them with his heart. He chose to confront them with their disobedience, their rebellion, and their need. He did this to drive them to his mercy. When God looks at you with his heart, he always looks at you in mercy, and then he sees you. If God were to look at you the other way around, in other words, if God were to look at you – or me -- through his Law rather than his Gospel, it would be better not to be found!

"Open our eyes Lord, we want to see Jesus.

To reach out and touch him and say that we love him.

Open our ears, Lord, Help us to listen.

Open our eyes, Lord, we want to see Jesus."

Zaccheus reached out to Jesus from a tree. A woman with a flow of blood got hold of him, at least for a moment. Peter held on to him tightly, amidst waves of overwhelming fear. A healed Samaritan leper knelt at Jesus' feet. It only took a heartbeat for these eyes to become open and for them to see Jesus for who he really was. The Advent and Christmas seasons invite us to look with our hearts. Luke, chapter 12, verse 34 says that

“... where your treasure is, there your heart will be also.”

The wise men saw a simple star in the sky, but their hearts saw something totally different. Their hearts saw a newborn king, and a long journey to a foreign country began. King Herod saw a birth announcement, but his heart saw threat, danger and ruin, and a deadly search entered every house in Bethlehem. Shepherds saw angels in a starry sky, but their hearts saw the fulfillment of a long-awaited promise from God. Two new parents saw midnight feedings, sleepless nights, and diaper duty, but, in their hearts, they saw "God with us."

How do you see something you're blind to? You’ve heard the old sayings:

It's as plain as day.

It's as obvious as the nose on your face.”

Sounds simple doesn't it? You still can't see it? Someone says, "It's right there. Can't you see it?" And the honest answer is "No! I can't. I want to. But I can't!" So I ask again: How do you see something you're blind to? Sin blocks our view, our view of God. Sin darkens our world and leaves us stumbling in the dark. It clouds our sight. It gives us no certain direction. Sin gives us no new set of glasses, no new prescription that can correct this odd blindness. The only thing that can correct the problem is a transplant. But seeing spiritual truths really has nothing to do with our physical eyes -- it has to do with the soul and the heart.

How do we become "blameless in God's sight?"It's hard enough to be blameless in the sight of others. Fingers are always so quick to point and blame. Parents point at rebellious children. Kids point back at absent parents. Bosses point a finger at lazy workers. Employees point to greedy employers. Pastors point out inactive members. Parishioners point to uncaring pastors. It's inherited. It’s easy for us to do. We do it all the time. So who’s to blame then? It's the government. It's the environment. It's the culture. It’s never my fault. My school failed me, some might say. My church wasn't there for me. My friends did nothing. My family's dysfunctional. What a world we live in! Everybody blames everyone and everything – except themselves – for their problems. So how in the world, can anybody be blameless in the sight of a holy and perfect God?

Christian author, Max Lucado, in a book titled “And the Angels Were Silent,” says:

What an irony there is in how our sinful hearts see God. Making God "human" like us obscures his divine, out‑of‑this‑world love. Yet God becoming like us, in every way but sin, is too much for us to accept. So we make God too human. We think he must work like we do. I’ll tell you what the solution to our problem is – it’s a Gospel that forgives and empowers! It’s a heart that sees. If God were to look at us through the eyes of the Law, he would see nothing but the ugliness of our sin. We deserve nothing but death. Now that's a look that kills! So God looks at us with his heart ‑- a heart full of grace, compassion and mercy in Christ - the One who died on the cross to forgive our sins and was raised from the dead for our justification. God’s heart sees a people whom he loves, like a parent looks at a child's action with disappointment, even anger, and yet loves that child anyway. When God looks at us with his heart, it's a look that gives life. Thanks be to God!

God can look with his heart and see us clothed in garments of forgiveness because his eyes are focused on his Son on the cross. God loves so much in his heart, that he even sends his own Son as the sacrifice for the people who need him so badly. What we need from God, and what we get from Him, is God‑given spiritual eyesight. We see into the heavenly realms, but we live on this earth. We see God with the eyes of the heart. Because our physical eyes see death and dying, hatred and envy, we need to see God, our neighbors, and the world, with the eyes of our hearts.

"I see it now, Pastor. I understand what it means to see with the eyes of the heart. But where do we go next?"

Consider what Paul says in Ephesians.

The glorious Father ... may give you the Spirit of wisdom and revelation.(Ephesians 1:17).

Paul closes his eyes. He shuts out the world and he looks to God to supply all his needs. Our text this morning says,

I pray also that the eyes of your heart may be enlightened in order that you may know the hope to which he has called you.

There's something about being on a journey where the end is in sight. It's like seeing that mountain range in the distance that marks the end of your trip. You're not there yet, but seeing those mountains makes the journey just a matter of time. Now the journey is about hope. And what is hope? It's not a wish granted or a favor performed. It's far greater than that. It's depending on a God who loves to surprise his people. May God bless us with hearts that see his actions clearly. May he bless us with a faith that serves us well, day in and day out. May our faith, at the beginning of this new year, enrich this life, and carry us through to the next. May the eyes of our hearts be enlightened so that we may know the glorious hope to which we have been called through Christ. In his most precious name we pray. Amen.

Dear Heavenly Father – We thank you for blessing us with every spiritual blessing – through Your Son. We thank you for choosing us. Strengthen our faith in the Lord Jesus, and our love for all the saints. Help us know you better, as we learn to see with the eyes of the heart. In Jesus’ name we pray. Amen.