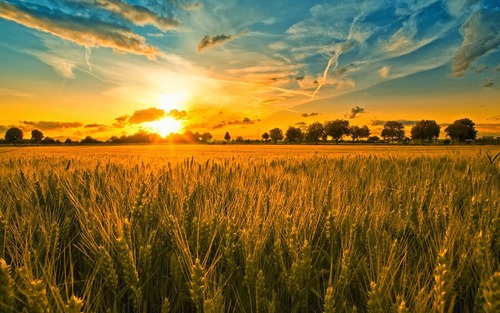 24 He put another parable before them, saying, w“The kingdom of heaven may be compared to a man who sowed good seed in his field, 25 but while his men were sleeping, his enemy came and sowed weeds3 among the wheat and went away. 26 So when the plants came up and bore grain, then the weeds appeared also. 27 And the servants4 of the master of the house came and said to him, ‘Master, did you not sow good seed in your field? How then does it have weeds?’ 28 He said to them, ‘An enemy has done this.’ So the servants said to him, ‘Then do you want us to go and gather them?’ 29 But he said,x‘No, lest in gathering the weeds you root up the wheat along with them. 30 Let both grow together until the harvest, and at harvest time I will tell the reapers, yGather the weeds first and bind them in bundles to be burned, but gather the wheat into my barn.’ ”

36 Then he left the crowds and went into ithe house. And his disciples came to him, saying, j“Explain to us the parable of the weeds of the field.” 37 He answered, “The one who sows the good seed is the Son of Man. 38 The field is the world, and the good seed is kthe sons of the kingdom. The weeds arelthe sons of the evil one, 39 and the enemy who sowed them is the devil. mThe harvest is nthe end of the age, and the reapers are angels. 40 Just as the weedsoare gathered and burned with fire, so will it be at nthe end of the age. 41 pThe Son of Man will send his angels, and they will gather out of his kingdom all qcauses of sin and rall law-breakers, 42 sand throw them into the fiery furnace. In that place tthere will be weeping and gnashing of teeth. 43 Then uthe righteous will shine like the sun vin the kingdom of their Father.wHe who has ears, let him hear.

Dear brothers and sisters in Christ,

A man sows good seed, wheat, in his field.  Under the cover of darkness his enemy sows bad seed, false-wheat, on top of the good wheat.  As the seeds sprout they grow together, so intermingled that you can hardly separate them.  If the workers were to attempt to pull out the weeds they would most certainly uproot some of the good wheat as well.  The master instructs his servants to permit the wheat and weeds to grow together until the harvest. Then gather the weeds to be burned and gather the wheat into his barn.

The bad seed that the villain in this parable planted was darnel, also known as ‘false wheat.’  This weed looks almost identical to wheat until the ears appear.  At the harvest it is obvious which is the true wheat and which is the false wheat.

The man who sows good seed is Jesus.  The villain who sows bad seed is Satan. They are enemies.

After Adam and Eve sinned, having been deceived by Satan, God confronted Satan and said: “I will put enmity between you and the woman, between your seed and her seed; he shall bruise your head, and you shall bruise his heel.”[1]

This declaration of enmity, that is the declaration that the Seed of the woman and Satan are enemies, is the first proclamation of the Gospel in the Bible.  The seed of the woman is Jesus.  Jesus is true God. He is the Son of God from eternity.  God of God, light of light, very God of very God, begotten not made, being of one substance of the Father by whom all things were made.  And this true God became the seed of a woman.  Through a virgin girl the creator of the universe became a human being.

Jesus spoke the truth on earth.  Satan spread lies.  As God foretold Satan bruised Jesus, the seed of the woman, by leading wicked men to crucify him. Yet through Jesus’ death on a cross, Satan’s head was crushed.  Jesus was crushed for our iniquities.  With Jesus’ wounds we are healed.[5]  Satan’s goal is to kill our souls with his lies.  Jesus defeated Satan by saving our souls through his death on the cross.

You who have true faith in Jesus are the good seed that grows into wheat in Jesus’ parable.  You are good seed, because you receive everything from Jesus, the true seed of the woman.  You defeat Satan, because Jesus crushed the serpent’s head.  The gospel promises you everything that Jesus won for you on the cross. You receive the forgiveness of sins, Jesus’ righteousness, and the promise of eternal life through faith as a free gift.

Everywhere the gospel is preached Jesus sows his seed and it grows into good wheat.  However, wherever God builds a church the devil builds a chapel.  Wherever the true gospel of Jesus is preached Satan preaches his false gospel.  And wherever the true wheat, those who trust in Jesus’ promises, grows, there too grows the false-wheat planted by Satan.

We may hear the gospel of Jesus preached in church on Sunday morning, but we hear many other conflicting messages throughout the week.  The commercialized world tells you to seek after pleasure, reward yourself; be selfish.  The tabloids encourage you to judge others and speak poorly of them.  The culture tells you to disregard God’s commandments and to embrace your sin.  If you want to have sex outside of marriage, have sexual relations with someone of the same sex, abort your unborn child, divorce your spouse because he/she doesn’t meet your expectations, or covet your neighbor’s property the culture of today encourages you to do just that.  And if anyone, even God’s Word tells you otherwise, the culture tells you that they are judgmental, unloving, and hateful.  Satan sows his false-seed by preaching the false gospel that you can do whatever you want, as long as it is the right decision for you.

As darnel looks similar to wheat, so Satan too makes his preaching sound similar to the true gospel. Satan does not want you to trust in Jesus’ righteousness.  The gospel promises: “To the one who does not work, but believes in him who justifies the ungodly, his faith is counted as righteousness.”  Satan, on the other hand, wants you to believe that you must be saved by your own righteousness.  He permits true teachings like: Love the Lord your God with all your heart, soul, and mind; Love your neighbor as yourself; Don’t kill; don’t commit adultery; don’t steal; etc.  He even permits the teaching that Jesus is the Son of God, who died on the cross for you.  Yet he insists that you trust in your own works, your own righteousness, and that you not trust solely in Jesus’ righteousness for you.  Many are deceived by this false gospel.

You cannot look at your neighbor and determine whether that person is wheat or a weed, only the Holy Spirit can search the heart of people.[6]  Nor does God give you the authority to do so.  As Jesus’ wheat, you must live among the weeds in this world. Satan’s false gospel is preached everywhere, even in churches that claim to preach the gospel of Jesus.  Yet we do not seek to pull out the weeds from the world.  We do not do as the Boko Haram did and kidnap over 200 girls and force them to convert to Islam.  We do not do as the Islamic State that has taken over nearly one third of Iraq has done and kill both Christians and Muslims who disagree with them.  No, we battle Satan by confessing the truth, and pointing out where groups or individuals depart from the truth.  Only the true gospel can defeat the lies that Satan preaches.

The harvest, what Jesus calls the “close of the age,” is the appointed time when Jesus will separate the wheat from the weeds, those who trust in Jesus from those who reject him.  Just as it is obvious to the reapers which stalk is wheat and which is a weed, because of the ripe ears of grain, it will be obvious, who are the righteous children of God and who are the causers of sin and doers of lawlessness.

If we look at ourselves, however, the “harvest” may sound scary.  I have caused others to sin.  In my youth I have encouraged my peers to break God’s commandments through my own bad example. Or even in my old age, I have been a bad example to those who look up to me, I have given bad advice, and I have led others to behave sinfully.  When I recount my thoughts, my words, and my deeds, I know that I have been lawless.  I have no certainty by my own works that I will be considered wheat.  No, the more I look at my past I am sure that I am a weed waiting to be bound and tossed in the fire.

But there is no condemnation for those who are in Christ Jesus![7]  Those who believe the gospel that Jesus preaches will not be condemned.  You believe in Jesus’ gospel when you repent of all your sins and ask God to forgive you, trusting that God will forgive you for Christ’s sake.  For when you believe in the promises of Christ, you receive what Christ promises.  Jesus Christ promises that whoever believes will be saved.[8]  God counts you righteous for Jesus’ sake.[9]  Through faith you receive Jesus’ righteousness.  You are judged according to Jesus’ righteousness that he has given to you in your Baptism.  When God looks at you he sees Jesus’ righteousness.

Our text finishes: “Then the righteous will shine like the sun in the kingdom of their Father.”  At Jesus’ transfiguration we are told that Jesus’ face “shone like the sun.”[10]  God the Father then spoke from heaven: “This is my beloved Son, with whom I am well pleased.”[11]  The righteous will shine like the sun on the last day, because they reflect Jesus’ righteousness.  God makes you righteous through the Gospel, when you believe that your sins are forgiven for Christ’s sake.  At the close of the age, God will see each and every one of you who trusts in Jesus shine with Jesus’ righteousness.

This is how extreme the gospel is.  When God forgives you he removes your sins as far from you as the east is from the west.[12]  God removes your sins from you and he forgets them as well.  At the close of the age no one will be able to bring a charge of sin against you, because Jesus has completely removed them from you.

We suffer in this life.  We suffer with the unfaithful.  And sometimes it seems that those who reject Jesus live a better life than us.  And Satan lies to us.  Satan accuses us of not being righteous.  Satan accuses us of sins that God has forgiven.   Satan tries to convince us that we are not the good seed Jesus planted, but the false wheat, because of our sins.  Yet we do not look at ourselves to see if we are the righteous seed.  We look at Jesus.  When God looks at us at the close of the age, he will not look at us according to our sins.  He will look at us according to the righteousness of Jesus that we cling to.  God will see us, his children, shine like the sun in his kingdom.[16]

Since Christ has full atonement made

And brought to us salvation,

Each Christian therefore may be glad

And build on this foundation.

Your death is now my life indeed,