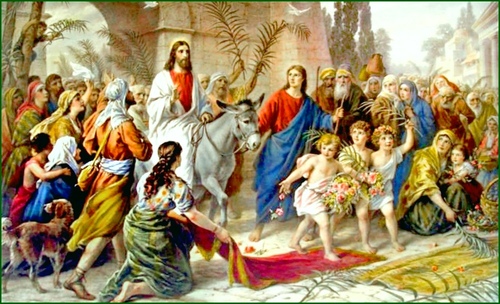 Now when they drew near to Jerusalem and came to Bethphage, to the Mount of Olives, then Jesus sent two disciples, 2 saying to them, “Go into the village in front of you, and immediately you will find a donkey tied, and a colt with her. Untie them and bring them to me. 3 If anyone says anything to you, you shall say, ‘The Lord needs them,’ and he will send them at once.” 4 This took place to fulfill what was spoken by the prophet, saying,

5 “Say to the daughter of Zion,
‘Behold, your king is coming to you,
humble, and mounted on a donkey,
on a colt, the foal of a beast of burden.’”

6 The disciples went and did as Jesus had directed them. 7 They brought the donkey and the colt and put on them their cloaks, and he sat on them. 8 Most of the crowd spread their cloaks on the road, and others cut branches from the trees and spread them on the road. 9 And the crowds that went before him and that followed him were shouting, “Hosanna to the Son of David! Blessed is he who comes in the name of the Lord! Hosanna in the highest!” 10 And when he entered Jerusalem, the whole city was stirred up, saying, “Who is this?” 11 And the crowds said, “This is the prophet Jesus, from Nazareth of Galilee.”

Grace, mercy, and peace from God the Father and Christ Jesus our Lord:  Dear daughter of Zion, Christmas is coming!  Children are writing their wish lists.  The grocery stores have been playing Christmas songs for a couple of weeks already.  People are putting up their Christmas lights and many are stressing out buying gifts.  To the commercialized world, Christmas is in full swing.  The Church, however, does not start celebrating Christmas until December 25.

Today is the first Sunday of Advent.  Advent has four Sundays.  You might think, “Okay, what’s so special about Advent?”  Advent means “arrival” or “coming.”  During Advent we prepare for the arrival of the Coming One: Jesus.  “So Advent is a time to prepare for Jesus?  Jesus already came two thousand years ago, so what do I need to prepare for?”  Is this true?  Is Advent just a time for the Church to pretend that we are waiting for Jesus to come as a baby (something he already did)?  Do we really have anything to prepare for? Is Advent only good for counting down the weeks that we have to buy presents?  Today’s Gospel lesson teaches us how we ought to prepare during Advent and really, how important the Season of Advent is for the faith of a Christian.

Jesus’ triumphal entry into Jerusalem is the appointed Gospel Lesson twice every year.  We first hear it read on the first Sunday of Advent (4 Sundays before we observe the birth of Jesus).  We hear it again on Palm Sunday (five days before we observe the death of Jesus).  This is very appropriate, because Jesus was born for the very purpose of dying for our sins.  To help us better understand how we ought to prepare; let us look at how the crowd prepared for Jesus’ coming.

What a wonderful confession of faith!  How did the crowd come up with such an appropriate response to Jesus’ arrival in Jerusalem?  Did they rehearse or something?  Well, yes.  They did. The crowd did not make these words up.  These words were given to them to say.  The crowd confessed the true faith as it was taught them in the Psalms.  Psalm 118 reads:

Blessed is he who comes in the name of the Lord!
We bless you from the house of the Lord.”[2]

These words were composed in heaven, a song written by God himself for his people to sing!  And his people were fortunate to receive these words from God; otherwise they would have been compelled to cry as Isaiah did when he saw God sitting on his throne:

“Woe is me! For I am lost; for I am a man of unclean lips, and I dwell in the midst of a people of unclean lips; for my eyes have seen the King, the Lord of hosts!”[3]

The crowd that greeted Jesus was a crowd of sinners.  They disobeyed God’s Law.  They knew God’s Law and they disobeyed it anyway.  They were tax collectors, who cheated people out of more money than they owed.  They were prostitutes, who actively attacked God’s gift of marriage.  They were men, who hated their brothers for gifts God gave them.  They were women, who hated their sisters for their piety.  And these people descended from people who constantly caused God grief.  Their ancestors continuously worshipped false gods.  They set up idols in the Temple of God.  They let themselves be seduced by cult prostitutes and they even sacrificed their own children to idols.

God could have with righteous anger wiped these people off of the face of the earth.  If we look purely at the behavior of the people of Israel for the fifteen hundred years before Jesus’ entry in Jerusalem, you would expect terror at the coming of a righteous God.

Yet Jesus does not come in anger.  He does not come to destroy these sinners.  He comes in a way that they can receive him: humble and riding on a donkey, bringing salvation.  Not only does God come in a way that these sinners can receive, he gives them the words to say, so that they can receive him.  These sinners, brought to faith through God’s Word then repeat God’s Words back to him.  The only words appropriate for sinners to speak to a righteous God: “Save us now!”

Now, you might be thinking: “That’s nice, but that still happened two millenia ago.  Jesus isn’t marching down Albert Street anytime soon is he?  How does this help me prepare?”

But the words spoken by the crowd in Jerusalem are as relevant to us today as they were to them.  We are a people of unclean lips.  We are not worthy to speak to God.  The words we speak are often hurtful to our loved ones. We struggle with the same sins that the children of Israel struggled.  Israel was no stranger to sexual perversion, but neither are we.  Christians are more likely to model their lives after the secular culture depicted in movies and shows, which place sex outside of marriage than they are to model their lives after God’s Word. We covet what isn’t ours.  We want or neighbor’s toys, car, house, wife, or job.  If we don’t want his money, we want his work ethic, or talents.  We are more concerned with our physical wants than our spiritual needs and we often neglect prayer and worship.  And if we were to speak to God, we would likely just make excuses for our behavior.

Honestly, if we were to examine ourselves according to God’s Law, what on earth would we say to God?  How would we receive him? How can we prepare ourselves for God to come to us?

But we, like the crowd in Jerusalem, are most fortunate.  God has given us the same words to speak.  In fact we speak these words every Sunday that we receive the Lord’s Supper.

We are incapable of preparing ourselves by our own strength to receive Jesus.  But God prepares us.  He has granted us faith.  He has given us the words to speak: words of repentance.  Our lips are no longer unclean, but they are purified by Jesus.

We are not putting on an act in preparing for the coming of Jesus.  As the people of God prepared for Jesus coming as a baby by repenting of their sins and praying for God to be patient, we continue to repent and pray.  And as the faithful cried for God to save them as he entered lowly on a donkey, we cry for God to save us as he comes to us lowly in bread and wine.

Jesus already came as a baby. He already entered Jerusalem humble and riding on a donkey.  Jesus will not come into the world as a baby again.  He is already a man.  There is no such thing as reincarnation.  He won’t enter Jerusalem on a donkey again.  He already made his entrance and died on the cross for our sins.  Yet, Jesus comes to us today in Word and Sacrament.  When the pastor declares the good news that Jesus forgives you, your faith receives that forgiveness.  Jesus comes to save you.  When you come to the Lord’s Table in faith to receive the Lord’s Supper, Jesus comes to you to save you.

And Jesus comes to you in yet another way.  Jesus promised that he would come again.[4]  After Jesus ascended into heaven the angel said that he would come again in the same way he left.[5]  The same Jesus, who was born of a virgin, who road on a donkey into Jerusalem will come.  The same Jesus, who was pierced hand and foot as he was crucified and laid dead in a tomb, who rose from the dead on the third day, and who ascended to the right hand of the Father, will come again with those same nail pierced hands, with the same flesh and blood.  He will come and he will judge.  Those who have refused to repent of their sins and trust in Jesus will face God’s judgment for their sins.  Those of us who trust in Jesus will shout: Hosanna to the Son of David, Hosanna in the highest.  And that is exactly what Jesus will do.  He will save us.  He will take us from this veil of tears we call earth, where we can’t stop sinning, and he will bring us to be with him in heaven, where we will never sin again.

Advent prepares us for Jesus’ coming to us in Word and Sacrament and for Jesus’ second coming by pointing to Jesus’ first coming.  When we pray: “Hosanna” we are confessing what Jesus has already done, what he is doing, and what he will do. He already came, died, and rose for us.  He currently comes to us in Word and Sacrament.  He will come again to bring us to live with him in heaven forever.

He comes to judge the nations,

A terror to His foes,

A light of Consolations

And blessed hope to those

Who love the Lord’s appearing.

Send forth Your beams so cheering,

And guide us safely home.[6]