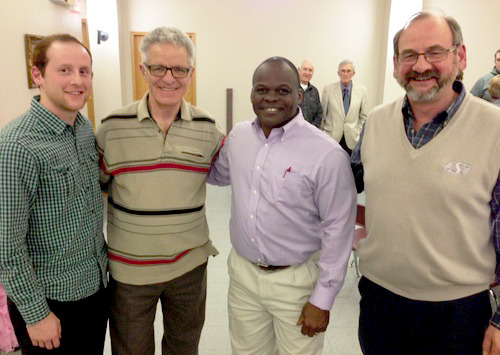 After some good hearted fun, warming up the crowd, with the help of Mount Olive member Roberta Nixon; Richie Hall then shifted gears to very passionately speak about his faith in Jesus and the difference between just being on a team and being part of a team. He said it’s not always hard to get on a team but it is a challenge and blessing to be part of a team. He recounted growing up as a Christian, and in that way, being on Jesus’ team but continued to talk about how, as he grew in his faith and personal relationship with Jesus, he thankfully went from just being on Jesus’ team to being a part of it. He explained this shift for him with three points.

1)   Jesus as his Best Friend: Richie recalled people talking about Jesus as many things growing up but he remembered how on the advice of his mother, who he loves dearly, Richie began to consider Jesus as his best friend when he first started playing CFL football professionally in Calgary. He expressed his appreciation that Jesus knows him better than anyone, knows the good things and even the bad things in his life better than anyone.

2)   The Unconditional Love of Jesus: Richie marveled at the fact that God would be willing to send His Son, Jesus, to die on behalf of a sinful humanity and how, in this, the unconditional love of God is shown. He spoke of his personal desire to grow in this himself, following the example of Jesus, and how important this is in our relationships with others, and how Jesus in His incarnation went “all in” and became part of the human team so that humanity could be part of His team. Reflecting on this Hall spoke of how it’s easy to love unconditionally when everything is going well in a relationship with someone but very difficult when someone backstabs you or hurts you. Taking on the challenge of loving others is an important part of being on Jesus’ team.

3)   The Peace of Jesus: The third thing that Hall commented on, as vital in his personal Christian growth, was learning and understanding and accepting the peace that Jesus gives in all circumstances even when things aren’t going the way you’d like them to go. He talked about how many people become upset with God and life when they don’t receive some blessing they think that they should receive instead of counting the many blessings God has given them. Specifically he talked about his boyhood dream of becoming a professional athlete and coach. These things happened for him and Hall counts them as some of his biggest blessings. He did however also talk about how even though it was difficult to be let go from his head coaching position at the Edmonton Eskimos he couldn’t truly be mad at God when he really sat down and looked at the many blessings God has provided him. Hall recounted the disappointment at leaving Edmonton but continued to talk about the great joy of being with the Roughrider’s again and just how special the people of Saskatchewan have become to him personally, and how seeing all of this for himself was made possible by the peace of Jesus in his life. This peace is the same peace that Jesus spoke of in John’s Gospel when He said, “Peace I leave with you; My peace I give to you. Not as the world gives do I give to you. Let not your hearts be troubled, neither let them be afraid.” (John 14:27 ESV)

The evening ended with some questions and a closing prayer by Pastor Terry Defoe (Who also provided an opening prayer and Grace Prayer before the meal). Pastor Terry’s Prayer focused on the need to be Great Commission Christians, always reaching out with the Love of Jesus, which is exactly what the Lutheran Layman’s League Fair Booth Ministry has been doing in Regina for decades, if you would like to be involved in this outreach by taking a shift at the booth this Summer contact the church office for more details. Special thanks to everyone who made this evening a great success!