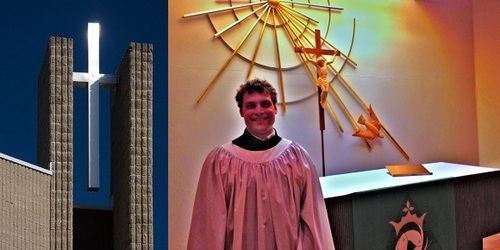 On a very quick trip to Concordia Lutheran Theological Seminary in St. Catharines Ontario (May 27th to 29th) Pastor Ted Giese met James and Theresa Preus, our new vicar and his wife! The trip was to attend the Vicarage Retreat, an opportunity to meet the vicar and go over details about his time at Mount Olive Lutheran Church. Rev. Terry Defoe will be Vicar Preus’ supervisor during his twelve month stay in Regina. James’ vicarage will start in August 2013; his vicarage will be his third year of Seminary Studies.

What is a vicar?  “A vicar is a candidate for ordained pastoral ministry, serving in a vicariate or internship, usually in the third year of seminary training, though it can be delayed to the fourth year (this is often referred to as "a vicarage", a homonym of the residence of the Vicar). Typically at the end of the year of vicarage, the candidate returns to seminary and completes a final year of studies. After being issued a call or assignment, the candidate is ordained as a pastor in the ministry of Word and Sacrament. The role of a vicar in the Lutheran tradition is most comparable to that of a transitional deacon in the Anglican and Roman churches, except that Lutheran vicars are not ordained.”[1]

Born in Racine Wisconsin, James is 24 years old and grew up in East Grand Forks Minnesota; he and Theresa (nee Stephenson) were married on April 26, 2013. Watch for more details about the vicar and his wife in the weeks to come! And remember to keep James and Theresa in your prayers! In the next two months you’ll hear of a number of ways that you can help with their move, and with their stay, and with his time of learning here with us.

What kinds of things will the vicar be doing at Mount Olive? Vicar Preus will preach and lead worship services; he’ll be involved in teaching Bible Studies, confirmation, and Sunday school. He will attend various congregational meetings and circuit meetings. He will come along on visits and shut in calls and hospital visits, and then later he’ll do these visits on his own. James will also have the opportunity to experience other local Lutheran communities such as seniors home services at the Regina Lutheran Home, and leading worship at Immanuel Lutheran Church in Frankslake and participating in the Circuit Lenten exchange, and in activities at camp Lutherland.  Because he is not yet ordained Vicar Preus will help with the distribution of Holy Communion but will not preside over Holy Communion. Over all James will be given many opportunities to experience every aspect of congregational live here at Mount Olive Lutheran Church.