More / Book of the Month / Rev. Ted Giese in Edmonton For CLS Board of Regents Meetings.

Rev. Ted Giese in Edmonton For CLS Board of Regents Meetings. 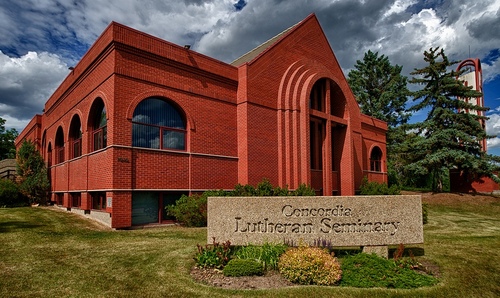 Rev. Ted Giese was in Edmonton May 22nd to 25th for the Concordia Lutheran Seminary Board of Regents Meetings. The Seminary also concluded their 29th academic year with the Sacred Convocation on Friday, May 24, 2013. The Convocation was held at the Robert Tegler Student Centre, Concordia University College of Alberta, Edmonton, AB. Three MDiv. graduates, Vincent Moore, Todd Guggenmos and Mark Schultz received their Theological Diplomas and Call Documents. Moore will be pastor at Christ Lutheran (Fort Saskatchewan, Alberta); Mark Schultz at Zion Lutheran (Rimbey, Alberta). Close to home , Saskatchewan native Tod Guggenmos will be pastor at Our Saviour Lutheran (For Qu’Appelle, Saskatchewan). You may remember that Pastor Giese received a call last year to be the pastor at Our Saviour Lutheran, Fort Qu’Appelle, but declined the call, Tod Guggenmos will fill that call.

In other placement news, Vicar Aaron Astley will serve his vicarage year at Christ the King Lutheran (100 Mile House, Alberta), and Scott Gamble at Foot Hills Lutheran (Calgary, Alberta). Mount Olive will receive a Vicar also, ours will come to us from CLTS in Ontario; his name is James Preus. He and his wife Theresa will be arriving in Regina in August this year and will be with the congregation for twelve months.

One of the highlights of the Convocation was graduate James Kay receiving his call documents. Kay is the second man to complete the Pastors with Alternate Training (PAT) program and will be pastor at Grace Lutheran Church in Edmonton. He will join the Pastoral staff at Grace Lutheran (Edmonton) on Sunday June 23rd, where he will continue to serve the Nuer-speaking Sudanese community which meets there. When Kay was called forward to receive his documents one of the Sudanese Choir members raised her fist in support and began to sing, all those gathered in the Tegler Student Centre added their support of Kay and his work with the Sudanese community with a giant round of applause.

Mount Olive Lutheran supports Concordia Lutheran Seminary in Edmonton in a number of ways: Some of our mission money, that we give as an offering to Central District, eventually feeds into the operating funds of the Seminary; Mount Olive also provides support by generously providing Pastor Giese to the CLS Board of Regents by making him available to go for meetings and to do other BOR work between meetings. Mount Olive’s LWML supports Seminary students directly by participating in the Adopt a Student program and the congregation has welcomed Students as part of the Take Wing program of the Seminary which send Students away for a weekend so they can garner a more diverse experience in preaching prior to the completion of their studies.  In addition to this members support the Seminary directly with their gifts and prayers both in the Divine Service and at home.