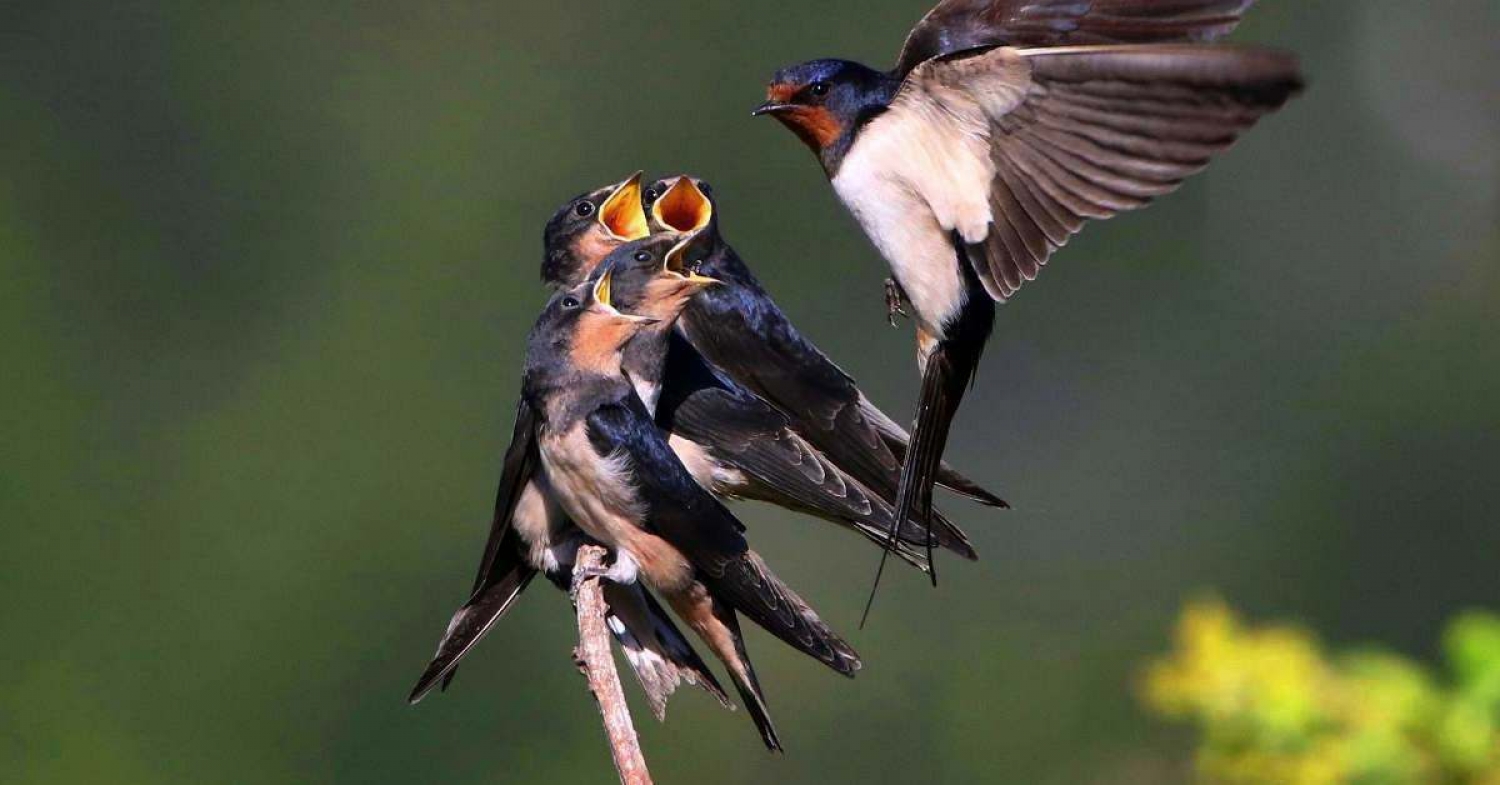 Sing aloud to God our strength;
shout for joy to the God of Jacob!
Raise a song; sound the tambourine,
the sweet lyre with the harp.
Blow the trumpet at the new moon,
at the full moon, on our feast day.

For it is a statute for Israel,
a rule of the God of Jacob.
He made it a decree in Joseph
when He went out over the land of Egypt.
I hear a language I had not known:
“I relieved your shoulder of the burden;
your hands were freed from the basket.
In distress you called, and I delivered you;
I answered you in the secret place of thunder;
I tested you at the waters of Meribah.

Hear, O my people, while I admonish you!
O Israel, if you would but listen to Me!
There shall be no strange god among you;
you shall not bow down to a foreign god.
I Am the LORD your God,
who brought you up out of the land of Egypt.

Open your mouth wide, and I will fill it.

“But My people did not listen to My voice;
Israel would not submit to Me.
So I gave them over to their stubborn hearts,

to follow their own counsels.
Oh, that My people would listen to Me,
that Israel would walk in My ways!
I would soon subdue their enemies
and turn My hand against their foes.
Those who hate the LORD would cringe toward Him,

and their fate would last forever.
But He would feed you with the finest of the wheat,
and with honey from The Rock I would satisfy you.”

Grace peace and mercy to you from God our Father and from our Lord and Saviour Jesus Christ. Good Christian Friends. In 1856 the poet John Greenleaf Whittier (1807–1892) wrote a romantic poem about regret where at its end he writes, “For of all sad words of tongue or pen, The saddest are these: "It might have been!"[1] Psalm 81 is a Psalm with similar sentiments, here the Psalmist looks at the relationship between God and Israel and laments Israel’s stubborn unfaithfulness toward God and how they might have dwelt in abundance and security, shinning as a beacon of light in the darkness of the World until the coming Salvation in Christ Jesus “The Rock” the Psalmist says from whom God would give them satisfaction like honey, like the finest of wheat. In the Psalm God says, “I Am the LORD your God, who brought you up out of the land of Egypt. Open your mouth wide, and I will fill it.”

This then is a First Commandment Psalm: “You shall have no other gods.” Psalm 81 teaches us that we should fear, love, and trust in God above all things. That “there shall be no strange god among you; [and that] you shall not bow down to a foreign god.” It is as though God the Father in all His might and power swoops in with a freshly plucked and regurgitated worm for the nesting baby birds to eat and instead of finding them with their beaks open and squawking for the food He would give, their beaks are clamped shut refusing to take the gift of food that is already theirs. “Oh, that My people would listen to Me [God says], that Israel would walk in My ways!”

Regret … “For of all sad words of tongue or pen, The saddest are these: "It might have been!"

Did you catch it when the Psalm said, “I tested you at the waters of Meribah,” what does that mean?  In Exodus 17 Moses records how “All the congregation of the people of Israel moved on from the wilderness … by stages, according to the commandment of the LORD, and camped at Rephidim, but there was no water for the people to drink. Therefore the people quarreled with Moses and said, “Give us water to drink.” And Moses said to them, “Why do you quarrel with me? Why do you test the LORD?” But the people thirsted there for water, and the people grumbled against Moses and said, “Why did you bring us up out of Egypt, to kill us and our children and our livestock with thirst?” So Moses cried to the LORD, “What shall I do with this people? They are almost ready to stone me.” And the LORD said to Moses, “Pass on before the people, taking with you some of the elders of Israel, and take in your hand the staff with which you struck the Nile, and go. Behold, I will stand before you there on the rock at Horeb, and you shall strike the rock, and water shall come out of it, and the people will drink.” And Moses did so, in the sight of the elders of Israel. And he called the name of the place Massah and Meribah, because of the quarreling of the people of Israel, and because they tested the LORD by saying, “Is the LORD among us or not?””[2] In that time God called their bluff, He did not hide Himself but rather He gave them water in spite of their poor attitude; Moses said that they tested God with their words and in a fashion God in the end tested them by giving them the thing they asked for … would they take the gift and acknowledge the Giver or would they refuse the gift, or maybe take it and fail to give thanks to the one who miraculously gave it: Testing yes, temptation no.

In “The Sixth Petition of The Lord’s Prayer we pray, “And lead us not into temptation.” What does this mean? God tempts no one. We pray in this petition that God would guard and keep us so that the devil, the world, and our sinful nature may not deceive us or mislead us into false belief, despair, and other great shame and vice. Although we are attacked by these things, we pray that we may finally overcome them and win the victory.” Testing yes, temptation no: Have you felt tested in life … or have you pushed God testing His patience, His graciousness, His mercy, the abundance of His steadfast love? Do you ever regret having been so wilful and stubborn? Psalm 81 laments that the Children of Israel had failed to trust God by the stubbornness of their hearts following after their own counsels. What does Moses record in Deuteronomy 5, God says, “Oh that they [My people] had such a heart as this always, to fear Me and to keep all My commandments, that it might go well with them and with their descendants forever!”[3]

In Matthew 23 Jesus makes a similar lament over Jerusalem, and the people who lived there saying, “O Jerusalem, Jerusalem, the city that kills the prophets and stones those who are sent to it! How often would I have gathered your children together as a hen gathers her brood under her wings, and you were not willing! See, your house is left to you desolate. For I tell you, you will not see Me again, until you say, ‘Blessed is He who comes in the name of the Lord.’”[4]

Does it seem odd to you that God would regret how poorly things went in the past leading up to the coming of His Son? That Jesus would lament the state of things and the trouble people had created for themselves due to their lack of fear love and trust in God in the days and hours before His Good Friday Crucifixion? On the one hand, it is a frightening thought to think that God would let you have your willful disobedience simply because you persisted in them. That He would say fine go ahead keep your own council, it's a frightening thought. God, on the other hand, has been all together faithful, yet in His regret over unfaithful Israel He did not go back on His promises to send the Christ, to send Jesus at “the right time [so that] Christ [could die] for the ungodly”[5] to rescue us, “when the fullness of time had come.”[6] Our weakness of faith didn’t impede the fulfillment of our Salvation in Jesus as promised. Likewise He does not withhold His promised Christ from you because you have sinned and gone astray, Jesus is as much yours in your sin as He is in the grace of your baptism and new life in Him.

On a day like this when we think again about those who have passed on ahead in the faith, and we think on the outcome of their lives, as we ourselves travel through life and age is added to age and we reflect, do regrets arise? Do we say “I wish I would have said this,” or “I wish I hadn’t said that;” or “I wish I had done this,” or “I wish I hadn’t done that,” “what might my life had been like if I had not been so focused on me, had I not clamped shut my beak in willful obstenence against the gifts of the Lord?” That poet John Greenleaf Whittier who wrote, “For of all sad words of tongue or pen, The saddest are these: "It might have been!" follows up those words by saying, “Ah, well! for us all some sweet hope lies Deeply buried from human eyes; And, in the hereafter, angels may Roll the stone from its grave away!” It's a rather wistful thing that he says, sad yet full of hope, that in The End all will be set right, and truth be told in Christ Jesus it will be, yet what about today?

There’s another aspect of Psalm 81. Psalm 81 is also a call to worship God, and while it deals with the sadness of those who refuse to come to Him with sweet songs and music is also reveals what God does do for those who do fear love and trust in Him, that He is abundantly providing His Word and Sacraments to fill the ears and mouths of men and women and children. His baby birds need not starve; they can have the precious forefeast of the feast to come today. They can have contentment with the little or the much that they have if their life is centred and balanced on God in Christ Jesus and not on themselves. Dear ones do not put off till tomorrow, do not put off to The Last Day what is yours today in Christ Jesus, be gathered up under His wings like chicks, like baby birds, “Open your mouth wide, and [He] will fill it” He will feed you with the finest of the wheat, and with honey from The Rock He will satisfy you, listen to Him, receive it all from Him, it is all yours even now.

“For of all sad words of tongue or pen, The saddest are these: "It might have been!" In the End you will not regret having received Holy Communion as often as you have, you will not regret the hours spent in prayer and song and congregation together at Church, you will not regret the time you spent in God’s Word learning of His Son Jesus and Jesus’ love for you and yours; you personally may have many regrets in life connected to your sin but you will not regret these things when your time has come and Jesus comes to take you to Himself. You may regret not having more of it but you won’t wish you had less of it. Listen to God, walk in His ways remembering that Jesus did so without fail and your forgiveness is found in Him and Him alone. Amen.