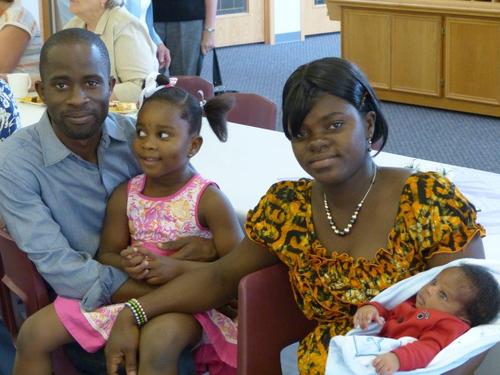 Listen here to a recording of Diana and Tommy Zlahn tell their story in person at Mount Olive:

But those who hope in the LORD will renew their strength. They will soar on wings like eagles; they will run and not grow weary, they will walk and not be faint. (Isaiah 40:31) These words from Isaiah bring strength and comfort to many of us, but the words have special meaning to Diana and Tommy Zlahn, for they literally received strength from God to run and to continue to walk – from war, enemies, and the circumstances of their lives in Liberia.

December 23, 2012, a week before Christmas Diana and Tommy attended Mount Olive Lutheran Church in Regina, SK for the first time. During coffee time after church, John sat with them and learned they had just moved to Regina in October. We invited them to join us for Christmas dinner with our family. During the past year they’ve become more than friends and are in fact part of our family. They’ve shared their stories with us and others at our church.

One of the many civil wars in Liberia began 1989, and Diana at the age of 6 remembers rebels invaded their home town. Her mother, her two sisters 5 and 2 and her aunt had to run and take shelter in the forest. After several weeks of sleeping in the rain and eating palm cabbage her 2 year old sister died of starvation. Not being able to watch all her children die, her mother left to search for food, leaving the children with her sister and Diana has not seen mother since that time.

Her aunt walked with the children a full day to another village where they were welcomed and given food and shelter. Soon after, that village came under attack and Diana was separated from her family. She followed a family who took her to the Ivory Coast and life was hard. She was in that home for many years and at first wasn’t allowed to go to school. A man in the village questioned her “mother” about this and Diana was then allowed to attend but only if she got up at three am each morning to get her work done. Her life consisted of little food and sleep, hard work and school (which she enjoyed).

In 1995 her older half-brother found her and brought her to Liberia to live with his wife and two children. Civil war in 1997 again brought heartache as her brother had to flee for his life and moved to the United States; in 2002 civil war forced Diana with her sister-in-law to runto Ghana. In 2005 her sister-in-law and one child moved to the US and in 2006 the older child joined them. Diana says: “I was left alone in Ghana but indeed, all things work together for them that love God. I believe that God wanted me to remain there and meet my lovely husband Tommy”.

In 1989 when Tommy was 7 his father sent him and his little brother to stay with his grandparents on their farm. Five days later they returned home to the news that his uncle was confessing to be the head of a rebel team that was sent to assassinate the president, putting the whole family in danger. Tommy still remembers their horrible race through the forest to the Ivory Coast. It marked the beginning of years of uncertainty to come. With his grandparents he spent the next two years not knowing where his parents were. In 1992 his mom and dad came home again. They had fled to Sierra Leone and escaped after the capture and execution of his uncle. Shortly after that they returned to Liberia which had now been liberated.

Life became a bit normal, schools were opened and at the age of 10 Tommy started Kindergarten. Tommy says, “As God would have it – He put a good head on my shoulders”. Tommy advanced quickly, getting double promotions and after 9 years graduated from high school.

During the civil war in 2002, Tommy’s father was high in the rebel government and believed to have been poisoned because of this. He died in July of that year and Tommy was now left with all the responsibilities for his family. Tommy remembered his dad telling him - if you’re ever in trouble and don’t know what to do, call Mr. Borop in the US. A good friend of his father’s, Mr. Borop helped Tommy for many years. In the war in 2003 the government was forcing all young men to take up arms. Tommy was captured with another young man, tied together by T-shirts to join the armed forces. With a big grin on his face Tommy tells us: “the other fellow took off his shirt and ran…soldiers ran after him…and I just ran the other way”. He hid in a neighbour’s house, then called Mr. Borop again. This faithful friend helped Tommy get to Ghana and paid for his college education. After college Tommy, as a software developer, got a job with a friend who was supervisor at a computer company in Ghana. A year later his friend left for another job and Tommy was promoted to supervisor and that company is still running successfully today. Tommy says, “Praise God for giving me opportunities to make an impact in Liberia.” In Ghana at the refugee camp Tommy met Diana, noticed she was always reading and knew he’d like to get to know her.

The move to Canada

In 2008 a friend of Tommy’s little sister traveled to Canada after being helped by Cheri Helstromfrom Grey, SK and the Milestone United Church Refugee Committee. Tommy was introduced to Cheri who he says, served not only as my legal representative at SINP (Saskatchewan Immigrant Nominee Program), but became a mother to me and grandmother to my children. On October 17, 2012 Tommy, Diana and their daughter Venus left the refugee camp in Ghana after nearly 10 years and arrived in Regina.

Life here also has small difficulties, a basement apartment with not much sunlight, a low paying job with a lot of out of town travel, trouble getting a driver’s licence. But these things too have improved. Tommy now has a job with the Saskatchewan government, running the help desk – a job he’s over qualified for - but there’s room for advancement. Emil Knuth, a former RCMP officer and member at Mount Olive, helped Tommy with driving lessons, and Emil and John approached an MLA about the unfairness of tests for immigrants … after 6 fails, Tommy now has his licence. A move last month to a three bedroom house, sharing the basement with the owner’s nephew, means more room, a better neighbourhood and sunlight! They both say, they’re happy to be in cold Regina.

Venus was very lonely at first in Regina, used to being in a community filled with children to play with all day she now spends most of the day with just mom and her new baby brother. She’s adjusted too though and is a lively, happy, almost 5 year old. Diana says she entertains her classmates. She has the run of our church and isn’t shy about meeting new people and exploring new things. You always know when she likes her food as she hums while eating. Tonny, their baby boy, was born June 25, 2013 and this beautiful child has brought much joy to their family –and to ours.

They have a few dreams. Diana would like to see orphanages in Liberia to give the many children who have no one a better life. Tommy’s dream is to set up an ICT institution in Liberia to help give hope and careers to many young Liberians who have been affected by civil war. Together they hope to bring Tommy’s mother to Canada, to live a better life and to watch over their children so that Diana can work and help make their life here easier.

We don’t always appreciate how protected we are, living in a country free from war, many of us free from hunger. When we have the opportunity to reach out to immigrants, we learn so much from them. Our family has been blessed, that God put us in a place to welcome and help Diana and Tommy in many ways. Mount Olive members have become their family.

The Isaiah verse is one of Tommy’s favourites and he’s the one who said: “Life in the midst of war and uncertainty … through it all I have learned to trust in Jesus.”