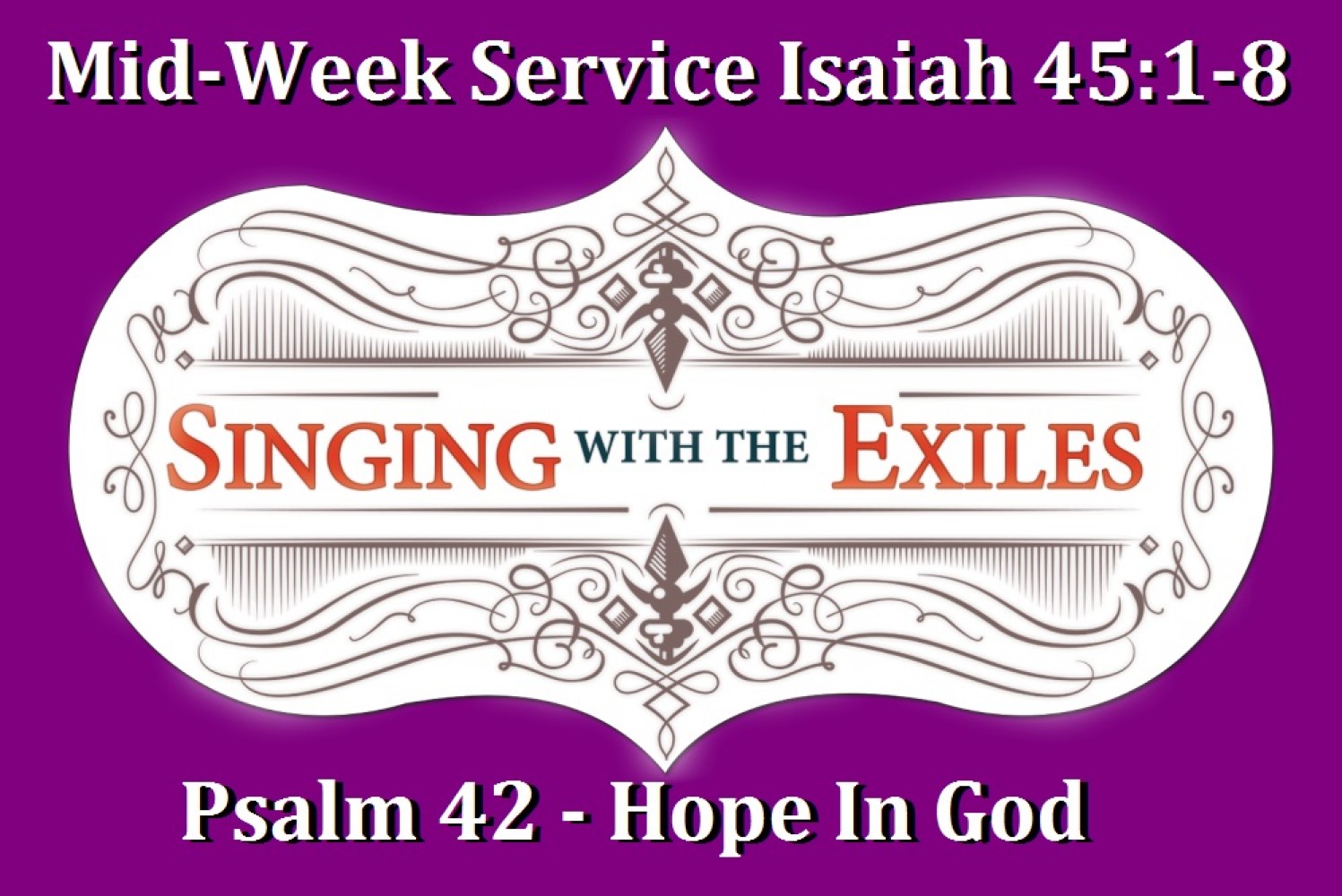 Grace peace and mercy to you from God our Father and from our Lord and Saviour Jesus Christ. Good Christian Friends. It was the afternoon of August 5, 2010 when the 121-year-old San José copper-gold mine in Chile, South America, caved in. Thirty-three men were trapped underneath 2,300 feet of solid rock.

Seventeen days after the accident, a note written in bold red letters appeared taped to a drill bit when it was pulled to the surface after penetrating an area believed to be accessible to the trapped workers. Translated from Spanish[1] into English the note simply reads: “We are fine in the shelter, the 33 of us.” But they were in survival mode. They ate two spoonfuls of tuna, a sip of milk, and a morsel of peaches—every other day. They heard the voice that said, “You are locked in with no way out.”

As the days added up, before they attached the note to the end of the drill bit, they must have wondered, 'has everyone forgotten us down here?' Trapped under all that rock they must have wondered as the Psalmist did in Psalm 42 when the Psalmist writes, "I say to God, my rock: “Why have You forgotten me." Psalm 42 is a prayer to God when all seems lost, when it even seems that God has forgotten you in your troubles, when you are trapped, hummed in behind a gate that you cannot break. In the darkness of your distress your "soul thirsts for God," two spoonfuls of tuna, a sip of milk, and a morsel of peaches—every other day, and as the Psalmist says, "tears for food both day and night," your soul troubled, and downcast, your soul in turmoil within you. Your prayers seem hopeless and your hear the accusation, “Where is your God?” Where is He now? You are left to remember better days. Better places. Better times.

In the sixth century BC, God’s people were surrounded by bronze gates! It wasn't exactly like being trapped underneath 2,300 feet of solid rock, they could see the light of day, they could see the grand ziggurats and canals of Babylon, but these things were just brightly coloured bars on their prison. In their exile God’s people were never far away from horrid statues of the Babylonian god Marduk, they lived in the shadow of this spiritual darkness, a black and deep mining shaft of spiritual evil, it made them long for their Temple in Jerusalem. They longed for the Temple as it was before they were dragged off into exile, the oldest amongst them would have remembered the house of God before it was laid waste, like the Psalmist in Psalm 42 they would remember going with the throng in procession to the Temple, entering in with glad shouts and songs of praise, they would long for the day when they could be with the multitude of God's Children in peace keeping festival. But they were not permitted to go there and everything seemed lost as they sat in exile: Those cursed bronze gates, especially the now world-renowned Ishtar Gate, locked them in with no way out. They were both physically and spiritually locked in - shut away from the wealth of the riches of the gifts of God which had flowed from His Holy Temple in Jerusalem, they were locked away from the Land of Jordan, locked away from the comforts and joys of their promised land.

The gates that locked them in, like 2,300 feet of solid rock, were the brain-child of Nabopolassar—the founder of the Babylonian empire—and his son Nebuchadnezzar. Herodotus and other ancient Greek historians[2] write that in late seventh and early sixth century BC, hundreds and hundreds of bronze gates were erected in and around Babylon, making it the world’s most fortified city. Israel was locked in tight and the voice of their captors, the voice of Babylon said, “You are locked in with no way out.” “Where is your God?” They were left to patiently wait on the LORD.

They would not have to wait forever. Isaiah recorded the Word of promise from the LORD to His people:  “I will raise up [Cyrus] in My righteousness . . . He will set My exiles free.”[3]

Cyrus was God's gate breaker: In 539 BC, Cyrus had to go up against Babylon and her gates. The city began bracing for an all-out battle. Inhabitants stocked their shelves with food and water to prepare for the long siege. The military got armed up, revved up, psyched up, pumped up in anticipation of Cyrus' attack.

But something remarkable happened: When Cyrus surrounded the city, its citizens—rather than fight to the last man (as they had prepared to do) — instead opened up the gates. Cyrus walked in and took the city with singular ease. That's anticlimactic I know, we want whizzing arrows and battering rams, and explosions, not the quiet click of a lock being opened - but think of all the lives spared as God broke the mighty doors of bronze by working on the hearts of the Babylonians, as He cut through the iron Bars with grace. God's rescue is greater than we can imagine, more than we deserve: God's people were not forgotten - God remembers His people, they do not sit forgotten. Their prayer like the prayer of Psalm 42 was answered.

Following his victory in Babylon, "in the first year of Cyrus king of Persia, ... the LORD stirred up the spirit of Cyrus ... so that [Cyrus] made a proclamation throughout all his kingdom and also put it in writing: “Thus says Cyrus king of Persia: The LORD, the God of heaven, has given me all the kingdoms of the earth, and He has charged me to build Him a house at Jerusalem, which is in Judah. Whoever is among you of all His people ... go up to Jerusalem ... and rebuild the house of the LORD, the God of Israel."[4] Free to go home they returned to rebuild the Temple which had been destroyed fifty years earlier.[5] Many who returned had never even seen the Temple in its glory because they were born in exile, born in the darkness of Babylon, however the old would remember, the old would return with rejoicing and God used Cyrus to make that happen.

What happened to the Chilean miners, the ones who had struggled seemingly forgotten under 2,300 feet of solid rock? Once the people at the top found out that the men were alive, once they'd read the note written in bold red letters at the end of the drill bit that said, “We are fine in the shelter, the 33 of us.”Then the peopleabove spared no effort to rescue them. Soon the skill, knowledge, and efforts from around the world were in Chile: three large international drilling rig teams, NASA, and more than a dozen multi-national corporations. After sixty-nine days trapped underground, all thirty-three men were brought safely to the surface on October 13, 2010. Even still sixty-nine days is a long time to sit with the Gates of Death closed over you: For without rescue they were dead men waiting to die, and they would have died. Their situation had demanded patience.

In the midst of your personal long-suffering, when patience is at a premium, and you feel as though you've been forgotten by God: When for all the world it seems to you that the enemy has locked the gate to your future and thrown away the key. When your soul is downcast and when and you're trapped by your transgressions and sins. When all your enemies mock you behind your bars saying, “Where is your God?” and there appears to be no escape, you have a Cyrus, an anointed one of God, He is not a man from NASA, He's not an international drilling rig team, He is Jesus.

Scripture teaches us that Jesus is God's ultimate gate breaker. In the Gospel of Matthew we hear how this unfolds: On the day of Jesus' baptism Matthew writes, “As [Jesus] was praying, heaven was opened.”[6] The Kingdom of God was at hand, the Gates of Heaven are no longer closed to you. From His baptism Jesus goes out and He preaches and teaches, and in so doing, He opened eyes and ears and mouths and hearts of the Children of Israel; He even opens graves. Gates of all manner and kinds are opened by Jesus.

But the grandest Gate opening was yet to come; after the betrayal, beating, bruising and crucifixion of Jesus, after His lifeless body was taken down from the cross and He was laid in the grave, after the Gate of Death - the stone - was rolled over the entrance of the tomb, on the third day Jesus was risen from His grave and the Gate of Death was broken.  Revelation 1:18 makes Jesus' victory crystal clear, Jesus says, “I was dead, and behold I am alive forevermore! And I hold the keys of death and Hades.” He holds the key to every gate. The gate of heaven, the gate of the dead, the gate of your heart, every gate.

You are not locked in with no way out! You are not forgotten. With a patient heart wait for the LORD and remember Jesus. As the Psalmist says in Psalm 42, "Hope in God." For it is Jesus who breaks down the gates of guilt and shame, hurt and pain and He is your Hope. He breaks down gates that trap and torture and torment us. And the gates of hell will never prevail against the shed blood, the baptismal power, or the mission of the Church of Jesus Christ! He spared no effort to rescue you, to open the gates and pull you out. It was not easy, Jesus was perfectly steadfast in His work, and because of His perfect long-suffering, His blood, His life, His death, because of all of this, no gate - no matter what kind it might be - can prevent His rescue of you. He breaks down every gate to set you free. In Him you now have salvation and righteousness. Amen.[7]

[7] This sermon was adapted in part from material provided by Rev. Dr R. Reed Lessing in the Concordia Publishing House 2015 Lenten-Easter Preaching and Worship Resource "Singing With The Exiles."