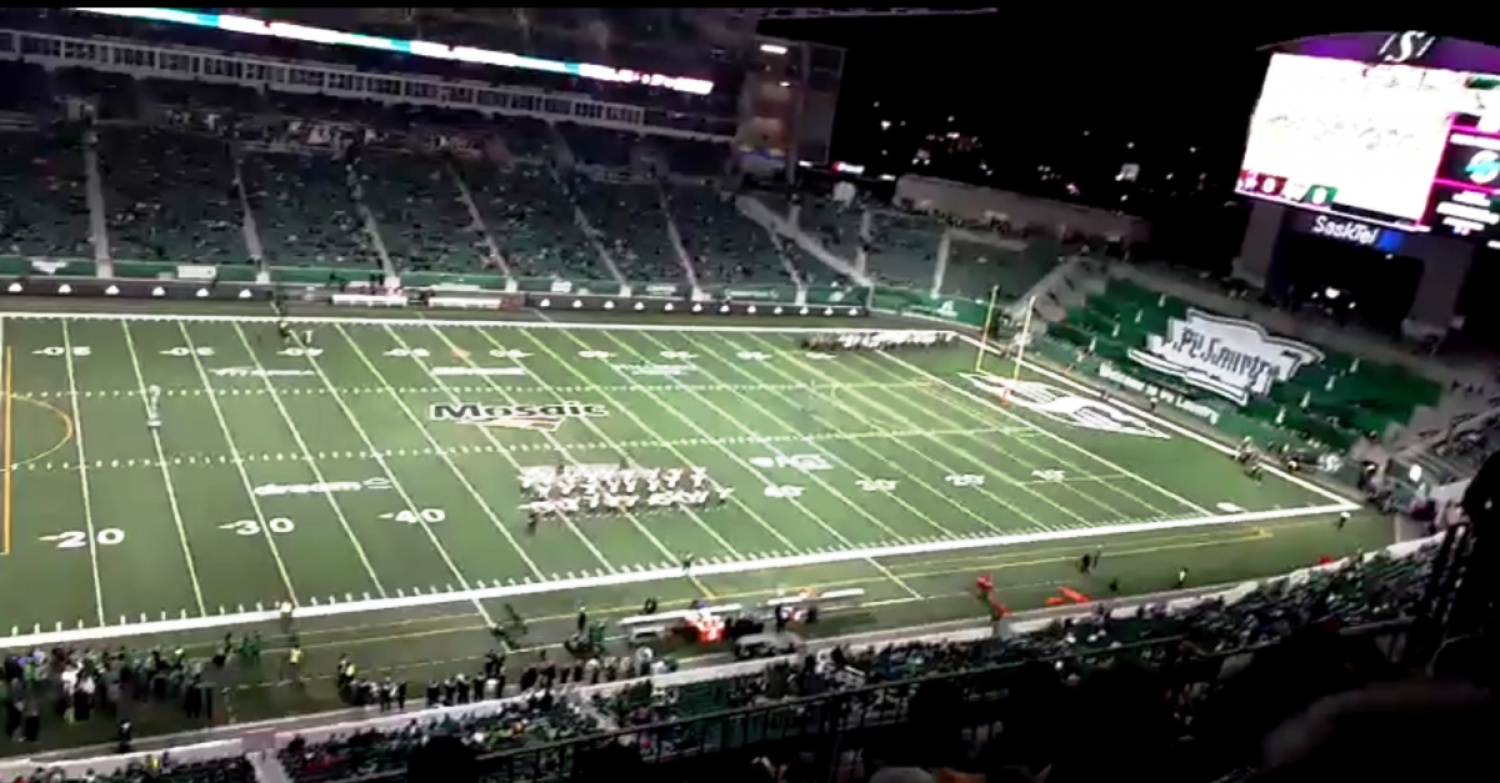 _The ball is oval. But you can also use a round one, or a small one, like a golf ball or a tennis ball. The most important thing is that it must be a ball, since all balls lead to the same end, to score.

_Every team has 12 players, but if sometimes they feel they would need more emotional support they can have more players on the field, and it won’t be a penalty;

_You will always try to score the most touchdowns your can to win the match, but it might as well be that the touchdowns of your opponent, even in less number, are more sincere and truthful and sincere to themselves. In that case they might be granted the victory.

_And even if the restrictions start to be relaxed a bit, games will still be played virtually from home, since football is a passion, it is inside us, in our hearts, so we don’t necessarily need to have teams and fans meeting together at a stadium

I don’t know for how long you will endure this. I think perhaps at this point you are considering asking the Elders to call a special meeting to assess what’s going on with Pastor Lucas, aren’t you?

We know that this is not how it works. I can’t just take the game and make it mean what I want it to mean. This game was created and its rules written so that we may know how it works, and believe that those rules will make it a good sport to follow

Jesus, the Son of God, the Messiah. He didn’t play football, but His life and work, like in the introduction I’ve just made, has been misunderstood, misrepresented, re-shaped, reformulated, and many other verbs across the centuries. In all cases, it is done to fit the expectations of a) the time, b)the people or b)the person proposing the new interpretation. Of course, money and power have always front row seat on this type of advance as well

That is not too different in our time too. Just to quote a very recent example, over the Easter weekend an American reverend and senator wrote about the meaning of Easter: “The meaning of Easter is more transcendent than the resurrection of Jesus Christ. Whether you are Christian or not, through a commitment to helping others we are able to save ourselves.” Fortunately, he deleted this tweet soon after. But misconceptions of this kind, and worse ones, have always cropped up in the Church, whether the seeds come from the outside or the inside.

We are very familiar with today’s Gospel. These things are written that you may believe that Jesus is the Christ the Son of God. Its meaning is so obvious that it is always good to reexamine something so obvious like that, both because it needs to remain obvious and also because of the temptation of following the Zeitgeist[1], instead of the Holy Spirit, as we re-read the Holy Scriptures.

1 - Written in the Gospel

Jesus is the Christ, the Son of God. This is the Truth number one of the Gospel. Without it, we have no Gospel, we have no faith.  Let’s look to some aspects of today’s text to see John writing things so that we may believe:

_Jesus comes to a locked room. Nobody else could do that. John was there, so he knew the doors were locked. He knows a miracle happens. Jesus is the Christ
_Jesus brings them peace and gives them the office of the keys. In the catechism we learn that this is the peculiar power Christ has given His Church to forgive and to retain sins. Who else could give it to us if not the Son of God Himself?
_Thomas – We think Thomas is sort of stupid, and how come he couldn’t believe in the word of His friends about Jesus?

We may be Thomas sometimes too. For example:
_Oh, you tell me God is good because a friend’s relative recovered from the disease? Well, why can’t I see my relative recovering, why did he or she had to die? Is God good for sure?
_so and so was blessed by God? Why can’t I see the same blessing in my life?

In many situations we act like him. And don’t forget that all the other disciples were sad and hopelessness too. When was it that hope was rekindled in their hearts? When they SAW Jesus

Yes, Jesus resurrected from the dead. But yes, doubts, questions and heresies never cease to creep up inside the Church about who Jesus really is

2 – Wrong teachings about the Christ

IN John’s time (and we can see him addressing it on His Gospel and epistles), Gnosticism taught that on Jesus’ Baptism an eon joined him and stayed until His passion when it left. So the Son of Joseph was no Son of God in the sense Christians teach it, and he is the one who died on a Cross, not the Messiah, the Son of God

Here are some heresies about Jesus across the centuries AD, that might every now and then come up as novelty

Doketism – Jesus looked like man, but was just God

Gnosticism - Jesus came to bring knowledge and evolution, the spirit is good, the flesh not so much.

Monofisitism – Jesus had only one nature, he wasn’t God and Man and the same time.

Revolutionarism – Jesus was a revolutionary who came to overturn the times and costumes of his people and because of that ended up dead.

Wokeism – Jesus’ words need to be reinterpreted in the Light of current cultural standards of morality. One of the classic instances is the “love” thing. “Jesus is all about love, he preached love, he lived love, so we have to think of love as accepting everything people are you to condemns anything people of today think is right?”

“There are in Christ two natures, namely, a human nature, assumed by the Word into the unity of His person, and that the same Christ suffered and died to reconcile the Father to us; and that He was raised again to reign, and to justify and sanctify believers, etc., according to the Apostles’ Creed and the Nicene Creed.”[2]

“Jesus Christ, true Son of God, has become my Lord. But what is it to become Lord? It is this, that He has redeemed me from sin, from the devil, from death, and all evil. For before I had no Lord nor King, but was captive under the power of the devil, condemned to death, enmeshed in sin and blindness… the entire Gospel which we preach is based on this, that we properly understand this article as that upon which our salvation and all our happiness rest, and which is so rich and comprehensive that we never can learn it fully.[3]

“Christ is and remains to all eternity God and man in one undivided person, which, next to the Holy Trinity, is, as the Apostle testifies, 1 Tim. 3:16, the highest mystery, upon which our only consolation, life, and salvation depends.” [4]

“But pastor, this sounds more like a doctrinal sermon, and doctrine is always good to know for sure; however, how does that impact my life, is it really necessary to know so many details about Jesus?” It surely is.

_If Jesus is not the Christ, but a mere human, how can he be at your side and provide for you? How would you carry on in life knowing that it’s you and you in the world, and you will have to bear with destiny and randomness at every turn of the road

_If Jesus is not the second person of Trinity, true man and true God, how can he be in Holy Communion and strengthen your faith for your daily battles?

_If Jesus did not pay the price of you sin as the Christ, where is the hope that your guilt can be commuted into forgiveness?

_If Jesus is just a revolutionary that died for his ideals, why placing faith in him and not in other that did the same? Or revolutionaries that perhaps did and do even better as far as human revolutions go, After all, Jesus narrowed was very exclusive – I am the Way and the Truth.

_If Jesus can be shaped according the century and the costumes, why would you waste your time believing in Him and learning about Him, and worshiping Him, if in so many years it would not make sense anymore?

_If with Jesus being God and Man in your life things are already difficult enough, what would it be of your living if it was without Him, or with a false teaching about Him?

John doesn’t leave us wondering who Christ really is. The Son of God.  The Messiah.  The Redeemer. “Christianity, if false, is of no importance, and if true, of infinite importance. The only thing it cannot be is moderately important.”[5]

.       Still, in the Gospel we see the resurrected Christ appearing to the disciples and sending them “as the Father sent me”. Think about what it implies: _To preach _to teach _to serve _In humbleness _In love

Then, we would set the record straight on that one about Easter and say: “The meaning of Easter is never more transcendent than the resurrection of Jesus Christ. Whether you are Christian or not, this is the Truth that changes History and changes lives. And lives changed by Christ’s message commit to helping others. This way we are able to extend salvation to them.”

Cc - We are sent out to the field to play guided by the Holy Spirit. This way we know we will play but the book and do it as it is supposed to be. By going out and playing courageously, more people will come across with these things that were written, so that they may also believe.

We can all by faith in Christ, play our full season here and run to the end zone for the final touchdown; rather, the final TouchUp. There we will receive from Christ Himself the crown, the trophy, of Life.[6]