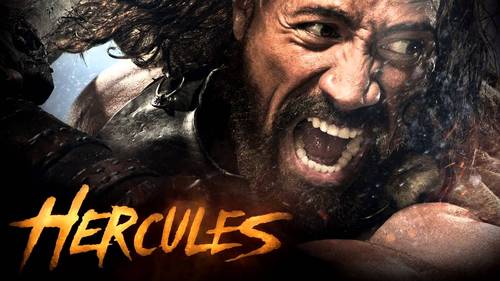 Listen here for audio of radio interviews about films from a Christian perspective with Pastors Ted Giese and Todd Wilken on IssuesEtc.org where Christianity meets culture. Listen here!

Hercules: not so strong on screen this time

The new Dwayne 'The Rock' Johnson film Hercules (2014) fits somewhere between Brad Pitt’s anti-supernatural, sword-and-sandal epic Troy (2004) and the cheesy, zany, over-the-top Kevin Sorbo TV series Hercules: The Legendary Journeys (1995-1999). This new iteration of the Greek hero opens with an extended recounting of Hercules’ (Dwayne Johnson) origins and some of his legendary twelve labours. What follows is a different kind of story. Unlike other movies in this genre, films like Jason and the Argonauts (1963) and Clash of the Titans (2010), Hercules does not include any Greek gods. This is where it has a lot in common with Troy. The Greek gods are talked about and there is an impressive CGI statue of Hera, but that's it; the gods never make an appearance.

As the movie opens there is a bit of a mystery as to whether Hercules is a demi-god (the son of Zeus and a woman) or whether he's just a mortal man with a big story, the result of some clever and ingenious help. Quickly it's shown that Hercules leads a group of mercenaries-for-hire, a sort of ancient Greek A-Team of orphans and misfits. You might remember in The Mighty Hercules (1963 - 1966) cartoon the theme notes that Hercules has the "strength of ten ordinary men." In this movie Hercules has the physical and emotional strength of his companions: long-time friend Autolycus (Rufus Sewell); adopted 'son' Tydeus (Aksel Hennie); 'sister' Atalanta (Ingrid Bolsø Bredal); nephew Iolaus (Reece Ritchie); and the seer Amphiaraus (Ian McShane).

The film’s plot centres on Hercules and his companions taking on a contract for the beleaguered and impoverished king of Thrace Lord Cotys (John Hurt). In the midst of all this Hercules struggles with his identity as a hero following the tragic death of his wife and children, a crime he's accused of and the reason he's a mercenary and not a champion of a Greek city state.

The film presents two underlying themes: 1) What makes a hero? Is it an internal or an external thing? Is it who you are or is it how others see you? 2) Is a person the master of their own fate/destiny or is it pre-determined? Within the character of Hercules there is a struggle between mercy and ambivalence. His companion, the seer Amphiaraus, who seems to be able to predict the future is both encouraging to Hercules while at the same time playing the fatalist. On the surface this sounds like really dramatic deep stuff, but it really isn't. The film poses these big questions but overall doesn't spend much time contemplating them. Brett Ratner, the film's director, is more interested in getting to the action—and there's plenty of it.

The seer Amphiaraus plays another significant role in the film. Early on he is introduced as someone who has supposedly seen his own death. As the film unfolds his fatalism about his own impending death is at first played for laughs but gradually edges towards poignancy. It asks a question the Lutheran theologian Francis Pieper discusses in volume one of Christian Dogmatics, "Is the [end of one's life][1] subject to change or [is it] unchangeable? Scripture teaches, on the one hand, that the end of our days is immovably fixed. Job 14:5 says, 'Seeing his days are determined; the number of his months are with Thee; Thou hast appointed his bounds that he cannot pass.' On the other hand, Scripture teaches just as clearly that human life may be prolonged or shortened. Hezekiah prayed [to] God that his Life may be prolonged, and his prayer was heard (Isaiah 38:1-5; 2nd Kings 20:1-6). Others again shorten their lives Psalm 55 says of the bloody and deceitful men that they shall not live out half their days. Both of these truths, the immovable fixed [end of life] and life's prolongation or shortening, must be maintained as divine truths. The former is true as viewed from God's standpoint, the latter is true as viewed from our human standpoint."[2] In Hercules this question is not viewed from the standpoint of the Christian God but presumably from the standpoint of a people who believe in the ancient Greek gods. Those gods are presented as capricious—like Hera—or distant and uninvolved like Zeus.

In general the film doesn't give viewers a very accurate view of religious life in ancient Greece; Wikipedia does a better job! Still, Christians watching the film may yet end up considering the question of whether the end of a person's life is changeable or unchangeable, both because it's a perennial question and because character after character (most obvious Amphiaraus) contemplates it. Hercules' 'adopted son' Tydeus is a reckless berserker in the face of death; Autolycus struggles with the idea of dying in a noble cause when one has a choice in the matter; and Hercules himself must wrestle with his own questions: Is he impervious to death? Is his strength true or just a story? At one point when death seems imminent and unavoidable Amphiaraus says to Hercules "No matter how far you go, man cannot escape his fate.” Then he asks, “Who are you? Are you a murderer? Are you a mercenary who turns his back on the innocent? We believe in you! We have faith in you! Remember the deeds you have performed, the labours you have overcome! Are you only the legend, or are you truth behind the legend? Now, tell me, WHO ARE YOU?"

Hercules is not a Christ figure in the film, at best he is more like Samson from the book of Judges.[3] In a particularly sluggish summer for 'block-buster-films' Hercules doesn't provide much of a box office boost. However, Johnson is charming and again shows he can deliver as a leading man. He's helped admirably by Rufus Sewell, Aksel Hennie, and Ian McShane who turn in above-average performances for this kind of film. Without Johnson and these supporting actors both the fun factor and the heart of the film would falter. Essentially, Hercules is a big budget B-film. Those who like that kind of movie will likely enjoy it. It’s not the best in this genre of film but it's a cut above the average and clearly not the worst by far.

You can also find this article featured in The Reporter and on the CanadianLutheran.ca.