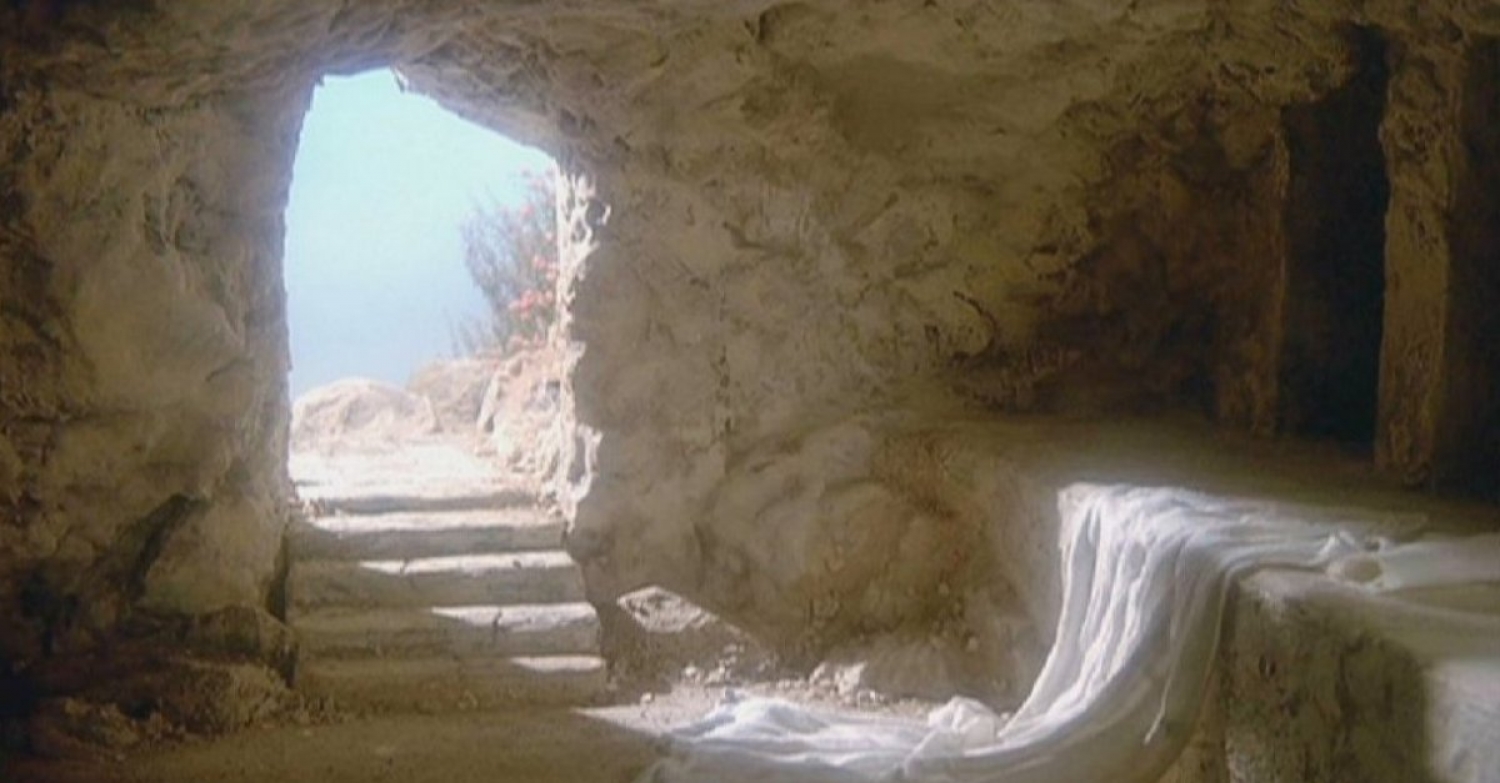 ___________________________
Intr – There are situations in life where you need to see in order to believe, right? Your salary slapping into your bank account, the giveaway that was promised arriving in your mailbox; flattening the curve by social distancing. Also, practical HR actions to make you believe that your company values its employees; or acts of love so you believe you are loved.

However, is it possible that sometimes you believe only when you don’t see?

That’s one of the most interesting things the Gospel of John is telling us this Easter morning about the two disciples who ran to Jesus’ tomb right away to verify what Mary and the women were telling them. They heard about a rolled stone and an empty place, but they had to go there and verify it with their own eyes. As they get to the tomb and enter it both are able to see several things in there. But one thing they don’t visualize: Jesus’ body. The Saviour wasn’t there anymore.

They knew that His body was placed right there – and that was a new tomb, no one was placed there before, so it could only be Jesus’; they knew that a big stone was rolled in front of the entrance, and even that many guards were placed in front of it to assure nobody would try any smart move. Then John tells us: “And he saw; and he believed.” I add: In what he didn’t see.

This is what Easter and its message are about: we believe in what we don’t see.

Now, let’s talk about believing in the resurrection as reported in the Bible. There are times in which we are suggested a train of thought like this: Jesus’ disciples where naïve, credulous people who would easily believe that a dead person could come back to life. They quickly held on to that belief and started sharing it without much evidence either empirical or scientific. Now, if you don’t want to bluntly assume that this is a fictitious story, then you soothe people’s feelings by saying that the disciple wanted so much their master back that He sort of came back to life in their hearts. And that’s the news they started to spread around. He lives in our hearts.

We could start responding to this argument with that good old one: why would those disciples, and thousands after them, put their own lives at risk for something that was just an illusion, a metaphorical re-creation or a wishful thinking about a special person they used to live? This has little to none probability to be true.

But the Bible itself runs against the grain of this proposition. If you read the Four Gospels and their narrative about the resurrection, all you see is the disciples’ resistance and almost skepticism about the resurrection. At first, they way more doubting than believing people. It took several factual happenings until they very convinced that the prophecy had taken place and that He was back from the dead.[3] They had a hard time at first to assimilate that Jesus had in fact, physically and historically resurrected from the dead. “For as yet they did not understand the Scripture, that he must rise from the dead.”[4]

What happened then is that they ended up being convinced beyond shadow of doubt that Jesus’ resurrection had in fact taken place as an historical event.

Then everything changed. They went from bewilderment to bold confession. They went from skepticism to full and unconditional belief. Then boldly and full of the Holy Spirit they engaged in fulfilling the Lord’s commission to the entire World.

They saw. And believed. In what they didn’t see.

Easter proclaims the strong certainty we have that we believe in what we can’t see with our bodily eyes. We meet Jesus in His Word and Sacraments in our daily life. We see Him, and we believe in what we don’t see. Where everything looks empty to the eyes of reason, there is where we see the God’s promises in full disclosure.

By the way, speaking of full and empty, our world is full of promises and hopes which in the end prove themselves to be empty. Easter is the news that an empty cross and an empty tomb make us full of Hope, assuredness and love in the Promises of the Lord.

Believing in what you don’t see is somehow like when you hear a sound. You can’t “see the voice”; you don’t see the sound waves moving towards your ears. But as it reaches them you know that sound is being produced. This makes me think of an analogy between Krakatoa the Volcano and the message of Easter.

Here is an excerpt of an article called: The Sound So Loud That It Circled the Earth Four Times: “On 27 August 1883, the Earth let out a noise louder than any it has made since. It was 10:02 a.m. local time when the sound emerged from the island of Krakatoa, which sits between Java and Sumatra in Indonesia. It was heard 1,300 miles away in the Andaman and Nicobar islands (“extraordinary sounds were heard, as of guns firing”); 2,000 miles away in New Guinea and Western Australia (“a series of loud reports, resembling those of artillery in a north-westerly direction”); and even 3,000 miles away in the Indian Ocean island of Rodrigues, near Mauritius* (“coming from the eastward, like the distant roar of heavy guns.”1) In all, it was heard by people in over 50 different geographical locations, together spanning an area covering a thirteenth of the globe.” [5]

This is how crazy this is: If you’re in Ottawa and someone tells you that they heard a sound coming from Toronto you’re probably going to give them a funny look. But they are just a mere 200 miles apart. What we’re talking about here is like being in Ottawa and clearly hearing a noise coming from Dublin, Ireland. “This is the most distant sound that has ever been heard in recorded history.”[6]

It was followed by a big Tsunami that devastated coastal communities, with a death toll ranging from 36k to 120k.The sound of this tragedy that killed thousands went around the world 4 times according to the report. And it still says: “It was a sound that could no longer be heard but that continued moving around the world, a phenomenon that people nicknamed “the great air-wave.”[7]

That reminds me of the “sound” of sin originated in a specific point in the middle east, the Garden of Eden – and was heard the world’ round even when we can’t see it. It impacted all lives on earth and would have led all of them to death; eternal death.

But God provided another sound, more powerful, effective and permanent that was heard around the world. It originated in the middle east on a Friday – “It is finished” - and then on a Sunday Morning  - “He is not here, He is risen!. That sound was so loud and powerful that it started to be heard in Jerusalem, Judea, Samaria, and to the ends of the Earth, way more times than four. After over 2000 years it still goes around the Earth being heard, believed and worshiped. “He is risen.” It is a sound that can no longer be heard from its original enunciation. But is continues to move around the world, a phenomenon the Church calls “Word and Sacraments”. This is how the news of Easter are still heard today and will keep going the world round.

Cc - Easter. We believe what we don’t see, but read, receive and confess: He is risen. Amen

______________________________________
[1] John 20:31
[2] Hebrews 11
[3] Lenski, The Gospel of St. John. Even a more elaborate and detailed articulation of the doctrine of the resurrection and its powerful message will come a little later, with St. Paul’s writings.
[4] John 20:9
[5]The Sound So Loud That It Circled the Earth Four Times  https://getpocket.com/explore/item/the-sound-so-loud-that-it-circled-the-earth-four-times?utm_source=pocket-newtab
“So what could possibly create such an earth-shatteringly loud bang? A volcano on Krakatoa had just erupted with a force so great that it tore the island apart, emitting a plume of smoke that reached 17 miles into the atmosphere, according to a geologist who witnessed it1. You could use this observation to calculate that stuff spewed out of the volcano at over 1,600 miles per hour—or nearly half a mile per second. That’s more than twice the speed of sound.
The Krakatoa explosion registered 172 decibels at 100 miles from the source. This is so astonishingly loud, that it’s inching up against the limits of what we mean by “sound.” In all, the pressure waves from Krakatoa circled the globe three to four times in each direction… Meanwhile, tidal stations as far away as India, England, and San Francisco measured a rise in ocean waves simultaneous with this air pulse, an effect that had never been seen before. It was a sound that could no longer be heard but that continued moving around the world, a phenomenon that people nicknamed “the great air-wave.”
[6] Op.cit.
[7] Op.cit.