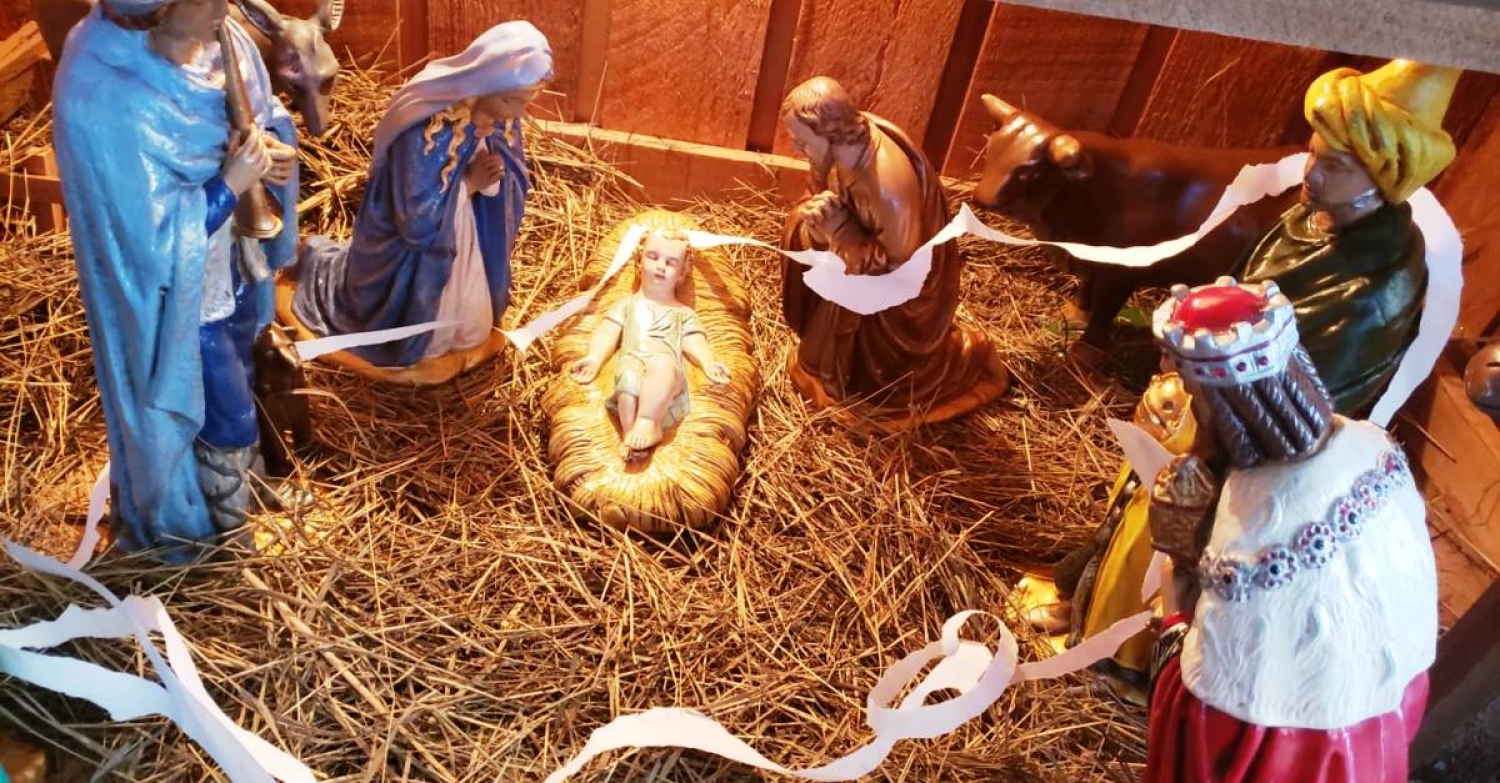 Text: Matthew 1:18-25
Theme: “God with us – the impossible happens”
___________________________
Intr – I have with me here a sheet a paper. And also a question for you: How could you go through a sheet of paper with your entire body? Is it possible? Would you have any clue on how to do it? Yes, it is really difficult to figure out how a 250lb guy like me, or anyone of you, could go through this little paper sheet with his or her whole body. The verdict would be: sounds like something impossible to be done.

Impossible. Does that word come together with Christmas, if considered from a human perspective? It surely does. In fact, there are so many impossible things connected to the nativity scene that is looks like this is the reason it has been watered down along the decades to fit our human reason better. Christmas seems to be now more so the feast of a baby child, of hope and love, respect, good cheers, and celebrating the good things in life. Mentioning all those “naïve, childish like” events of Christmas on air, or over coffee at Tim Horton’s sounds so strange that we’d better just stick to what is plausible, attainable, possible.

A quick digression: is it that so? Well, perhaps not. You know what it is ironic about this? Some impossible things are swapped for…other impossible things, which mere human desires and wishful thinking. As we can all see, things get worse for humanity by the year despite every year-end “love, respect and good cheers” celebrations. [1] In a way, this type of Christmas celebration would not only be a watered down party; it could be summed up in what that 80’s song[2] says: “Hoping for the best, but expecting the worst”.

Still, Christmas remains the Feast of the Impossible. A virgin mother, a perfect, sinless child; a husband that receives a wife which could be accused of adultery, shamming his honor; a star in the sky…   The most impossible thing of all though is one invisible to the eye but well knows to the heart: sin. How can sin and death be overcome and hope and new life could be present in our hearts?

There were plenty of attempts made along History to give a satisfactory solution to that problem, and all of them have fallen short of accomplishing the result. Human reason cannot come up with a satisfactory answer.

That’s why there is Christmas. It is not just about presents, good cheers and “to hope for the best but to expect the worst.” Christmas tells us that the impossible is no more.

_St. Matthew and St. Luke accounts.
The Mother - became pregnant being a virgin.[3]
The Father - embraced the commitment.
The King – was born in a stable.
The news - is announced by an angel.
The sign - a star in the sky.
The story tellers - simple shepherds from the fields.[4]

And this the impossible story that went the world ‘round. Christmas is the Feast of Faith, the Banquet of Believing. The celebration of the impossible. The impossible that actually happened.

And this is also very important – that those are historical facts. I heard on the radio even today that Christmas is not “just a date, but a frame of mind”. And related to that,  “pastor, it doesn’t really matter if the facts were exactly like that, right? The most important thing is the message of Christmas”. Well, both are crucial. The message AND the very historical fact that on that night, that year, in Palestine the Son of Man took human form. As God had done many times in the past, so He again made the impossible happen.

From that rough manger the baby becomes the man that, on the cross, finished all for us. This is how he made the impossible come true. Emmanuel – God with us

Think about this: God with us. Heaven comes close to earth, so much so that even angels are around. Whenever we think of being closer to God, the answer is only one: Jesus. The impossible made real.

This is why Christmas exists. Christmas reminds us EMANNUEL. God is with us. Hope is alive. Jesus.

That means there is hope for you. Perhaps you are that person in the middle of something happening in your life that seems impossible to you. I speak less of material problems, which can surely be big problems too, but especially emotional, spiritual ones. It may be melancholy, anxiety, grief or sorrow. It may be guilt -  you keep doing things you know you shouldn’t. On the other hand, it can be expectations (too high), strength (Too low). It may be something that you don’t think it’s possible to overcome or solve. You don’t see a clue, you don’t see a door. Then perhaps don’t even see Christmas as you would like it to be. There is so much pressure to be happy and in good cheers that you feel just the other way around for a specific moment you are living just right now.

That is the thing though: You. You don’t see, you don’t feel. What about God? How does GOD see it?

He sees this through Christ; then, through hope and love for you.   The answer then is not on the next “how to” text on your social media; not is not in just following your heart, especially when your heart is confused and lost; it is not in the next thing you buy, the next trip you take. It is not in your pocket, nor in your bank account or in anything you think or do. It is in where your faith rests. Emmanuel, God with us. This is the only way, the only answer. He is the answer for you, wherever you are. This is when respect, love, good cheers and wishes of peace and love make more sense. Because they are moved from the “impossible” section of the human shelf to the “made possible by Christ” in God’s design.

For you may think it is impossible. But that is a word that is not in God’s dictionary when it comes to save you, comfort you, restore and strengthen you. He did it before, He will do it again.

Cc – This is why I bought this illustration of the sheet of paper today, as a reminder of how you can always remain in the faith that “impossible” is just another way to say “God in action”. Let’s solve the question of passing through a paper sheet right now. Yes, there is one way to do it, and I’ll show you right now”. (Illustration). Now, if for a human challenge that seemed to be unsolvable there is an answer, how much more can we trust that God, who knows everything, has the answer to our deepest needs! That there is no impossible in all His promises!

[1]The most impossible of all: having your kids behaving well an entire year in order to an old bearded man wearing red and white give them presents for being “good”. I am a father of two small kids and I already know how impossible that is.

[2] A song that broaches another impossible human desire, “Forever Young”.

[3] As the birth of Adam was a miracle, so is Jesus’. If one denies the miracle of the creation of man and woman, one is closer to deny Christ miraculous birth as well.

[4]Why did God choose simple shepherds in the fields of Bethlehem to receive the news of the birth of Jesus and to proclaim it?
Perhaps because if He had announced it to some theologians they would first consult their books and check if still culturally relevant;
Perhaps if He announced it to some successful people they would first consult their agendas;
Or maybe if He tried with some scientists they would first need to do dozens of tests;
Still, if He tried certain groups of people they would first check every word of the announcement to see if they would offend anyone or contain “hate speech”;
The Christmas' account says that the angels appeared to shepherds outside Bethlehem. They were people with no 'reputation to keep' or 'schedule to fulfill'. People who understood that something important was going on and decided to be part of it just as they were, the way they could, with faith in their hearts.
This same message is announced today. We can also attend God's invitation and go see the manger without haste, schedule, position, doubts or assumptions. But it is only in faith that we can remember and announce the importance of this boy for our lives and for the lives of many; the coming Baby King, Jesus Christ, who offers joy, brings hope, and extends salvation and peace to all through faith in Him.
This message of hope is for everyone, without exception.
Whoever they might be. Wherever they might be.