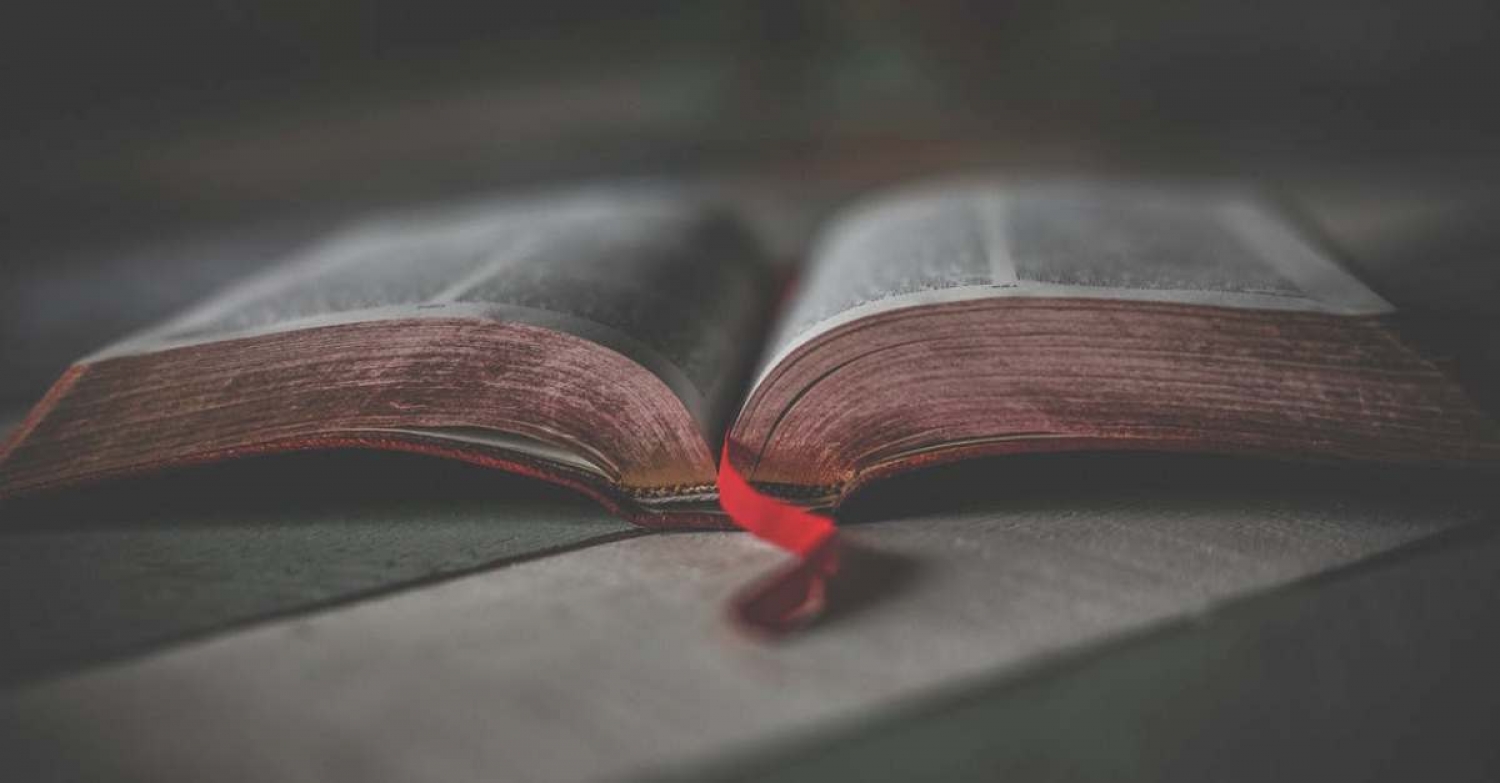 I’m pretty sure you’re wondering, “what is he doing?” And I would say: well, don’t you use you cell phone to write messages, type texts, make online searches? I’m showing you I can use it to write my sermon illustration here too. Using a little bit of reasoning you would say: “yes, we are talking about a common theme, writing, but the approach to each is different, and we need to differentiate them in order to understand both well – online writing and physical writing.”

“For us there is one God” is our theme for today. It’s not a new one but it comes back every so often when the question arises “Is there a God?” And in many situations what happens is that the theme is the same, God, but the approach to it might not be the most fitting to do so.

As Christians we start from the Bible, of course. The epistle for today is one of the texts that gives is the foundation of what we believe about the “Is there a God?” question: “We know that “an idol has no real existence,” and that “there is no God but one.” 5 For although there may be so-called gods in heaven or on earth—as indeed there are many “gods” and many “lords”— 6 yet for us there is one God, the Father, from whom are all things and for whom we exist, and one Lord, Jesus Christ, through whom are all things and through whom we exist.” In the Gospel, we see Jesus teaching with authority, differently from anyone else. From Psalm 111 we learn that “The fear of the Lord is the beginning of wisdom; all those who practice it have a good understanding.”

These, and many other passages in the Bible, provide us with what we need to know about God, bringing irrevocable evidence of His existence. Paul is teaching Christians in the city of Corinth that the topic of food dedicated to idols shouldn’t be a big problem for them because idols are no real God - there’s only One God. It would be like me telling you that you don’t need to be too worried about if buying hallal meat at the grocery store means you would be worshipping another god; because that description of the god to whom the meat was dedicated doesn’t match the God of the Scriptures, the Triune God and his Only Son Jesus Christ, so therefore it is ruled out as one. Unless – as Paul points to it – that could be a problem for a weaker mind or a weaker faith, then out of care for our brother or sister we would consider acting differently.

“For us there is one God.” Now, we live in a material world where there is an innate notion that we can only be sure of the existence of something either through our living daylights or by pure logic. Truth is, this is how every one was born, without any knowledge of God and without any means to grasp Him with our logic and senses. Then since God’s existence cannot be proven by the current standards of scientific methods, or by a specific logical movement, He must be just a creation of our minds. Like a famous new atheist would have written: “what can be accepted without evidence, can be also dismissed without evidence.” There is nothing more than meets the eye.

As Christians we could just refer to the Bible as the evidence of our faith, which is surely enough, but let’s talk today also from the other end; at that point where you might be in our material and materialistic world talking to someone from a human, rational perspective. We might reflect about the fact that just because you believe in God it doesn’t mean you are naïve, alienated, or have a lower IQ compared to a person who might think that that not needing an “imaginary friend” would point to and intellectual advantage point. But mainly when talking with a person who is honestly questioning and looking for God in their life.

The first thing to notice is the word evidence. We are often challenged to present evidence of Him – which here often means evidence under the standards of the current scientific method. If we go down that path we are being dragged into a different field, both in semantics and in experience. The attempt here is to have you trying to demonstrate your belief using other tools. Something I tried to do at beginning of the sermon. However, just because we use some common terms it doesn’t mean they can be explained with the same tools. In the scientific vocabulary, evidence means one thing. But God is spirit, and for that matter you can present evidence that doesn’t match the vocabulary you are being tempted into. How can you provide that type of evidence of something that is not material? Answer: You can’t. If we try to embark on that trip, we can be sure our boat will make water. It’s the same thing of asking: “can you present evidence that food brings comfort, satisfaction and memories?” We know it happens, but the evidence here would be of another kind. The same for other things in life we know that exist but we can’t present evidence of it: Love, courage, respect, nostalgia, beauty, thoughts.[1] There is surely way more than meets the eye.

We also see other lines of thoughts to disprove our instance on God, like these I saw watching a short clip of an agnostic humorist being interviewed by a catholic late night show host.

Not let’s say you’re having coffee with a friend at Tim Horton’s and the religion topic comes up. He or she might come with these arguments during the conversation:

1. About the question “Why is there something instead of nothing”, the question is not why, but how.  How is it that things existe and that's what we investigate.

2. We want to make sense of nature and science and its unfathomable.

These are challenging for sure. But not unanswerable challenges at all. We can address them – always in the perspective of God’s love for all and sharing His love with people. We don’t want to try to dunk on people or simply to boast about winning a discussion (after all, when it comes to human logic and material world we will always lose…). We want to engage in the conversation with the ultimate goal of sharing the One and Only God we know.

1.If there’s a need to switch from why to how, it’s because there’s no answer for why. It’s not an argument; it’s just switching the attention to a different perspective. The question “why there’s something in place of nothing” is not answered with tools of the current scientific method because it is not in its scope. Again, the illustration of writing on the paper with the cell phone.  It is outside of it, but completely inside of the Theological studies scope and goal.

2.Unfathomable – It might be seen as a contradiction, since the the rational mind pursues understanding and measuring things. The very use of this expression points to something beyond the natural world. Sounds like faith is been employed here too.

3.”I don’t believe in just one more god than you do”. I saw this illustration online that I share with you: “Say there was a crime and there are 50 suspects. I say “it’s number 30”. Then you would say, “well I don’t believe so”. Could we let all 50 go free just because you don’t believe in one more suspect than I do?”  There’s a reason and there are evidences why there are 50 suspects, and not all 7 billion people in the world. There’s a reason and evidence why not all 3000+ gods come to question, but only a few  - and in our case, only one, who has been resisting time and every attempt to kill him.

4. Science and the sacred books – this argument makes sense only when you think that the Bible is a book written by people about God. Then for sure something well different would be rewritten in 1000 years. Since we know the Bible is written by God to people, in the highly unlikely event the every single Bible would be destroyed, He would fully rewrite it all again.

This is not an exhaustive list, but a starting point, to show us that there are not rational arguments that are a blow in Christianity making it crumble and fall to the ground. On the other way around, people and ideas keep dying, but the Lord remains forever. As I read once: “Nietzsche said God is dead. God says: Nietzsche is dead”.

Addressing the rational roadblocks that might be in the way, the opportunity may appear to share what is actually our ground and foundation. The God of the Bible.

_Triune God;
_God incarnate;
_God Men, Saviour – Jesus;
_God eternal;
_God with you and for you;

Ultimately, it will remember us that the evidence of faith is the absence of (visible) evidence.[2]

“For us there is one God, the Father, from whom are all things and for whom we exist, and one Lord, Jesus Christ, through whom are all things and through whom we exist”. He is the same Jesus who taught with authority, expelled demons, healed people. But essentially, the Saviour whose life was given on the cross to be regained in the third day. These are facts, supported by evidence, acquired by the experience of being met by Him in His Word.

Cc – When talking about God, my friends, we have good starting points addressing some of the material talking points. We don’t need to dodge them. Above all though, remember where our evidence stems from: Gods Word and God’s Word alone. It is not always familiar to human reason; it is actually most of the time against it[3] - sometimes it will look like trying to write on the paper with our smart phone screen. Never forget another of the qualities of our God: There is no impossible for Him. Even in the most difficult situation of people questioning your faith in Him, carry on witnessing His love with deeds and words. Through our witness about the written word, still many will be called to faith and life.

[1] Ironically, there are things in our world we know aren’t true, and there’s no evidence to back them up, but that are taken as evident truth. For example: stars influencing your life, more than 2 genders, sending good vibes, etc...
[2] Hebrews 11
[3] Christianity cannot be attained by pure logic, but through experience with God. I’m not talking about mystic revelations here, or “God talking directly to your heart.” To experience here means that you come to know Jesus through the Bible, through the Sacraments. He meets you there. You look around the beauty of Creation and realize the Creator by faith. You can’t deduct God and Christ by your logical efforts. He brings you the experience of receiving faith by the Holy Spirit and that’s how you know God. From there, you can surely use logical arguments, that is, things you say that make sense and people can understand you – to witness about him.