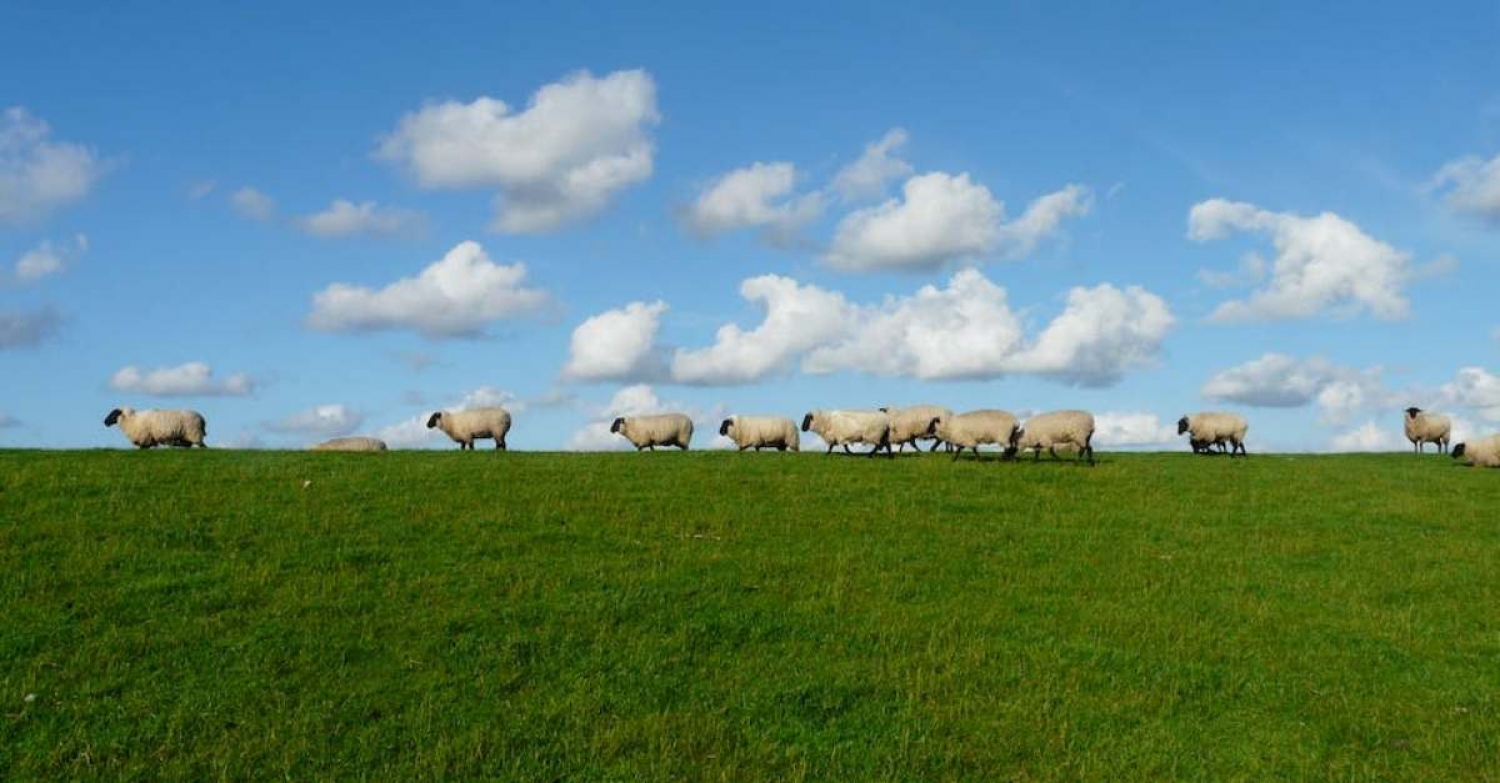 ___________________________
Intr – In preparing the sermon for this Sunday, I have found that the parable of the Lost Sheep and the Lost Coin aren’t actually in the Bible anymore, did you hear about that? The readings for today were in a print out inside my binder because when I went up to look for them in Bibles released in the last so many years these parables where nowhere to be found in them.

Well, I know you won’t believe me about that, and a quick check on the Bibles in front of you or on your smart phones will prove me wrong. Why would I then say that this parable has been wiped out from Bibles everywhere?

Because it looks like there are no lost sheep anymore. It seems that Hell will be soon facing closure for lack of inmates.

If the Good Shepherd would go out today after the lost sheep…where would he find it? Would He find any?

In the Gospel it seems quite clear who the lost are, since we see to main groups of lost people in Jesus’ audience:

When we look to our time though, it seems hard to find where the lost sheep are. We look around and wherever we think we might be pointing to a lost should in need of the Shepherd, you will find a reason why that sheep is fine, the Shepherd can rest in the fold. If they ever need Him, they will look for Him themselves.[1]

At this point you might call my attention to the fact that there are lost sheep everybody recognizes as such, everybody would agree there are evil, terrible attitudes around us. But even then, when it comes to definitions and who to blame for, you may find 50 shades of meaning. What one person defines as good, another calls it bad. One person may look like a model to some and as evil to others.[2] An example of this week: our Queen, who died last Thursday, considered as model of service, found by Christ from our standpoint, was called lost by some people around the world who see her in a different light, including a professor who wished her an excruciating death.[3]

This malleability of meaning may happen even us Christians. We are found sheep of the Shepherd but we may go down the dangerous road of finding conscience appeasers to justify beliefs and attitudes we have in our life as not as bad, or not too bad, or even adjustable and justifiable alongside Scripture teachings that do not approve of it.

Where are the lost sheep?

The Greek word in the text, apololos, means lost; damned. Another possibility of translation for this word in modern Greek is harebrained. Something that's harebrained is reckless or foolish. Even when sometimes, harebrained ideas work out just fine — several people have survived trips over Niagara Falls in a barrel, for example.[4], nonetheless being harebrained is hardly anyone’s ideal condition.

So a lost sheep is also a sheep who acts harebrained, in a reckless way, foolish. Where do you find those? Again, definitions may vary, and you ask 50 different people in town about it and you get 51 definitions about what being foolish and reckless means. Therefore, we need an objective ground to lay our feet on, and the ground is the Bible. Outside the Bible, we are out on the loose being swirled around by the winds of culture. Turning our eyes and hearts to the Bible we understand what makes a lost, harebrained sheep. Here is three basic ways in which harebrained sheep behave:

_Following our heart, our moral standards or the spirit of the time is always a harebrained idea from Faith’s point view. For it unhinges you from Truth, even when it gives only momentary pleasure, acceptance and assurance;
_Following the ever changing world’s morals. What is wrong today was right yesterday, what is right today may be wrong tomorrow. What is secure this week could have been dumped next month. What is a highly praised virtue this year may become a condemned sin in the next decade;
_Following your own conception of faith and religion. This is actually the reason these parables were placed by Jesus in the first place. Many of those people around him had their conception of religion ways off from the Word of God. Just like we have in our day too.

In short, we are lost when we are apart from faith, from the Word; from Christ. It doesn’t matter how good your behaviour might look before the world. If it is apart from faith in Christ, you’re lost. You are acting as a lost sheep. You are on the path of eternal death.

On the other hand, it doesn’t matter how bad you have acted, or how bad the way you act can confess your faith seems terrible before the word. When you are in Christ, you are acting as a found sheep. You are on the path of eternal life.

The Bible is clear about lost and found. In John chapter 3 Jesus says, “so that whoever believes in Him should not perish, but have eternal life”. “Whoever believes in him is not condemned, but whoever does not believe is condemned already, because he has not believed in the name of the only Son of God.” In Matthew 13 we see a set of parables He created to underline this truth. There will be and end. There will be a time when wheat and chaff will be sorted out. If you are found and you die like that, you will be with Christ forever. If you are lost and die as such, you’ll be lost forever.[5]

This is a challenging concept to share in our “build it yourself” religious life. The fact is that even when you don’t find lots of Church goers anymore, you still find a majority of people who talk about Faith, God or at least about energy, supernatural, and the need of being good. Almost nobody is lost, everyone has their own way to connect to a superior force and everybody goes to a better place after this life. So you should stop trying to convert people or telling them they are lost. This may be challenging for us in sharing the Gospel, as it might sound rude to stand by the truth that you either embrace Jesus and the Bible as it is, or you are probably living on a harebrained fold.

But the harebrained, lost sheep are the object of love of the Good Shepherd. A reckless life is met with a reckless love. A foolish behaviour is met with the wise work of the Saviour. Our Shepherd is relentless in searching the lost and feeding them. From harebrained sheep we become faith-brained sheep, as our hearts and minds are connected to Christ and His Word and guided by Him. We are found, and so we are connected to the source of Truth, Hope and Peace for our brain and for our heart.

We hear in the parables today that “there is more joy in heaven for a repentant sinner…” This clearly points to two facts:

1) LAW - there are lost sheep.  Paul offers a list in the epistle that even though not exhaustive but very clear about what can make us a lost sheep.[6]
2)GOSPEL - There is forgiveness, new life and rejoice in heaven offered to all lost sheep in the World. It doesn’t matter if the sin is on Paul’s list or not, it doesn’t matter how “small” or “big” it may appear. There is forgiveness for every single human being in Christ. Again, in the epistle for today Paul himself shows this good news active in his own life.[7]

We are found by the Good Shepherd to live in His Fold, and in the World. In faith we act to help denounce error and to bring Grace and Forgiveness.

There is Grace and Forgiveness to every single lost sheep. I was thinking about this Truth from the Kingdom of God and connecting it with its opposite – the kingdom of the World, in which many people have a hard time admitting that they have sinned, or that they are lost. You shouldn’t regret anything, for everything you did count as learning, and you don’t want to show too much weakness. It seems to me that the main reason is that when you admit your sin, or when you are caught sinning, there is no Grace and forgiveness, waiting for you, even when repentance is shown. What may follow is further crushing reprieve and shaming, with some even striving to erase your public figure from the scene.

In His Parable Jesus points to the fact that the Good Shepherd is not only relentless in seeking the lost sheep, but is swift in forgiving them, taking them up on His shoulders and prompting another joyful celebration of the angels in Heaven. There is Grace and Forgiveness for every single lost sheep. In Him.

Cc – As a side note, here are some opposites of harebrained in English language: intelligent / reasonable  / sensible  / thoughtful. These fit well as fruits of our faith as born-again sheep of Christ’s fold. Lost sheep whose hearts and minds were found by the Good Shepherd, now living in daily repentance and faith, and sharing the Truth of the Word with the World. This is the precious message of Christ. The Good Shepherd welcomes harebrained sheep into this Faith-brained fold.

[1]For example: Everybody who dies goes to heaven, to a better place, becomes an angel or is looking down on us from heaven, with rare exceptions.
_It looks like nobody commits sins anymore. And nobody can point sins out. You actually have to sort of rejoice in the mistakes you’ve made for they made you a better person, so you actually have no need to repent, just to learn. Even when one wonders how can we learn from something that you actually don’t think you need to repent from.
[2]Above all, what we see these days is that it’s not always about what is being said but who is saying it that counts. Depending on who you are, it would mean the difference of a mere “gaffe” that is forgivable and the merciless erasure of your social persona.
[3] https://www.foxnews.com/media/twitter-removes-professors-tweet-wishing-queen-elizabeth-excruciating-pain-death . By the way, the hashtag “#abolishmonarchy” was trending on Twitter on the same day.
[4] https://www.vocabulary.com/dictionary/harebrained . Also: The 16th century harebrained came from the earlier harebrain, "giddy or reckless person," from the common impression of a rabbit or a hare as being nervous and skittish.
[5]  The problem with us related to finding lost sheep though is that this parable doesn’t face us with a ginourmous problem. After all, what is a 1% loss? That’s manageable. That’s why in the next parable Jesus goes to 10% of loss. And he culminates with the 50% loss parable, the prodigal son. Losing a loonie when you have 100 dollars is not that bad. But losing 50 dollars, that’s a little more worrisome.  Even more worrisome when human souls are at stake. Souls and bodies.
[6]1 Timothy 1
[7] “I thank him who has given me strength, Christ Jesus our Lord, because he judged me faithful, appointing me to his service, 13 though formerly I was a blasphemer, persecutor, and insolent opponent. But I received mercy because I had acted ignorantly in unbelief, 14 and the grace of our Lord overflowed for me with the faith and love that are in Christ Jesus”.

Photo by Pixabay from Pexels: https://www.pexels.com/photo/11-white-sheep-in-the-grass-field-85683/