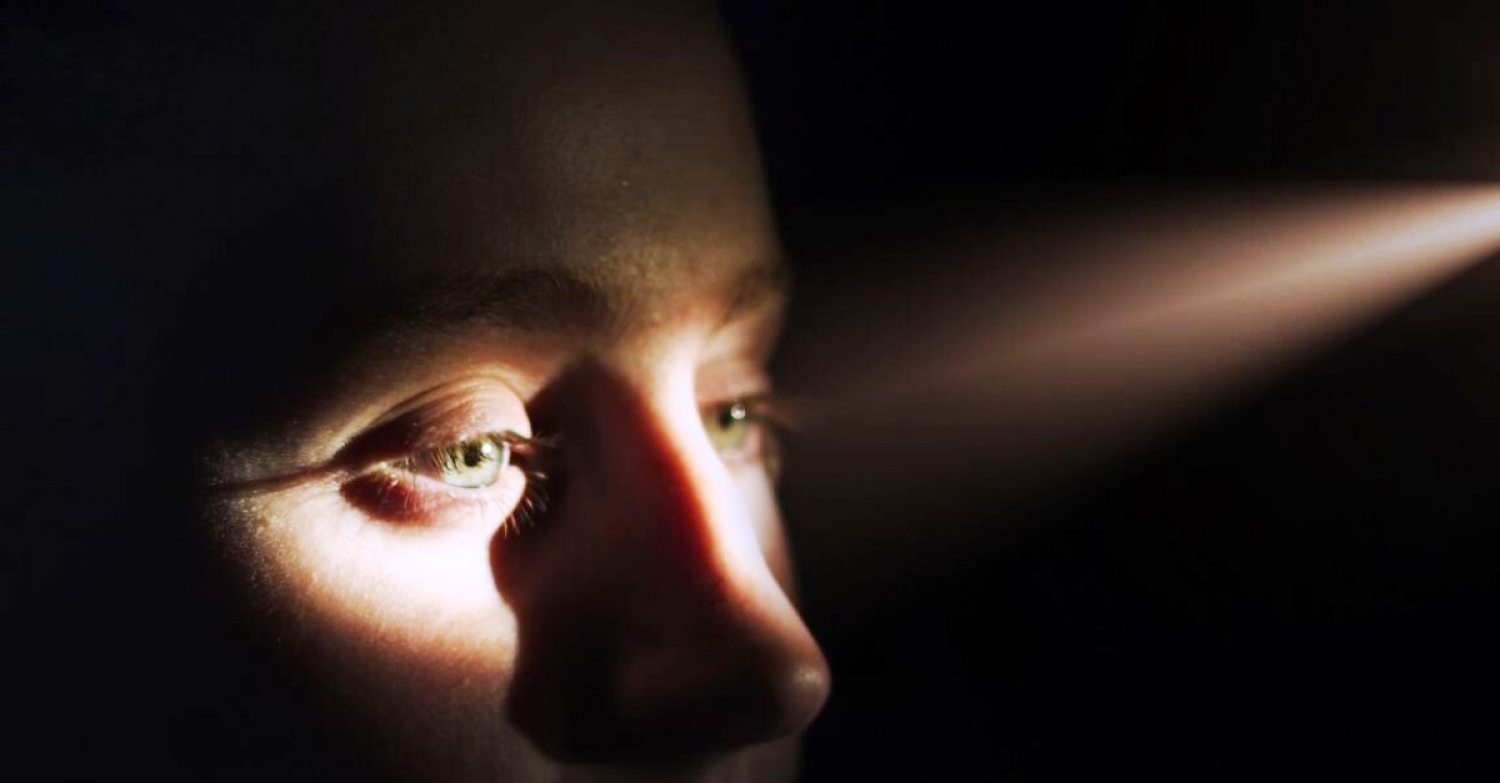 Text: Matthew 17:1-9 – Transfiguration Sunday
Theme: Enlightened
___________________________
Intr – Darkness is commonly defined as “the absence of light”. That holds true somehow, since you can only provoke shadows and darkness by removing light from the ambient. Now, from Physics we receive the definition that we can only see because light reflects on things. Light is the most basic and essential thing for us to be able to see.[1] That means that you need your eyes to see, but not only them. Even having two perfect retinas you won’t be able to see anything in complete darkness. You've got your eyes. But you need light.

Still, we can only see a specific, narrow range of light reflection. Whatever is under or over that range is not visible by naked eye. Wavelengths go from less than about 1 × 10−11 metre to radio waves measured in metres. Within that broad spectrum the wavelengths visible to humans occupy a very narrow band, from about 700 nanometres (nm; billionths of a metre) for red light down to about 400 nm for violet light. The spectral regions adjacent to the visible band are often referred to as light also, infrared at the one end and ultraviolet at the other. [2] That points to the fact that there are things that we can’t see because our eyes can perceive it.

Looking to the Gospel today, we see light. We see Jesus’ face shining like the sun. Jesus’ transfiguration. Even his clothes were as white as light. This Light irradiates for us to be able to see clearly, precisely and eternally the Son of God. Now, perhaps there are things under or above our sight in this reading, that is, things we may fail to perceive in quick reading. In case your eyes missed that, I'll shed some light on several of them:

_Moses and Elijah conversing with Jesus– The Law and the Prophecy before the Messiah.

_Peter, James and John. Two or three witnesses establish a fact, as we learn from the Law of God in the OT. They witnessed it, and attested the veracity of it, as they later even write about what they saw:
“we were eyewitnesses of his majesty.[3]
“And the Word became flesh and dwelt among us, and we have seen his glory, glory as of the only Son from the Father, full of grace and truth”.[4]

_No one knows which Mountain it is that they are on, even though Mt. Tabor is considered to be the place. It is not places, not images, not locations - as many in the past, and in Jesus times as well, liked to hold on to. “God in spirit and his worshippers must worship him in spirit and truth,”[5] doesn’t’ matter where.

_While Jesus was praying – Prayer is not an option, but a condition that follows faith in God.

_The text proves that death is no more, and that there is life after this life.
"First, The resurrection of the dead and the future glory and brightness of our bodies are shown. For this was something very remarkable, that Christ was transfigured while yet in the mortal body, which was subject to suffering. What then shall it be, when mortality shall have been swallowed up, and nothing shall remain but immortality and glory?
Secondly, There is added the appearance of Moses and Elijah, who prove by their appearing that they had never really died, and that there is yet another life, besides the earthly life, from which they were transferred. This appearance teaches us also that we should despise death, and look upon it merely as an emigration or a sleep. In short, this appearance proves that this life is nothing at all in comparison with the future life.
Fourthly.  This appearance proves that sin is overcome. For it necessarily follows as an incontrovertible conclusion, that, where death is overcome, there sin is also overcome."[6]

_Don’t be afraid – Isaiah 43. You’ll go through the water and fire (great perils) but I am still your God and your Saviour. Usually it is darkness that makes us afraid. Here, the disciples are afraid of the light. If God is not the God of Scriputres we may become afraid to come close to HIm, either because he istoo perfect and holy, or becayse we are so sinful and small. Jesus says we don't need to be afraid. Through faith he draws us near toshining Light.

_They are told not to mention it – Jesus wanted to fulfill the Scriptures, as the King of the World, and not people’s expectation as the King of Palestine, as the spreading of news like those could stir people to.

_Christ shines on the Mountain top and shows us five S words:

All of this point to the WORD and its precision, clarity and firmness, we could call transfiguration Sunday “grounded in the Word” Sunday.

Another way to look at Transfiguration Sunday is TRANSREASON Sunday. Only when we are enlightened by the Holy Spirit we can see beyond what reason can grasp, above and beyond. We see faith in Baptism. We see body and blood in Communion. We see healing in the hearts of believers. We see peace in the lives of those who walk with him. His light allows us to see beyond eyes can tell. We have our eyes of reason. But we need His Light in order to see beyond.

“I believe that I cannot by my own reason or strength believe in Jesus Christ, my Lord, or come to Him; but the Holy Ghost has called me by the Gospel, enlightened me with His gifts, sanctified and kept me in the true faith; even as He calls, gathers, enlightens, and sanctifies the whole Christian Church on earth, and keeps it with Jesus Christ in the one true faith;”[7]

Jesus is the Messiah. Grounded on the Word Sunday leaves no shadow of doubt about that. We need His Light in the darkness of our existence. But also we need His light in the lightness of our existence – for when there is too much light, you can’t see either. That happens when add too much “spirituality” to our lives, whether trying to be “better Christians” than everyone else, or by mixing and matching different "spiritual" ideas concepts.

Also, we are called to reflect his light into the World. The law of reflection states that, on reflection from a smooth surface, the angle of the reflected ray is equal to the angle of the incident ray. As opposed to a rough surface, where reflection happens in different directions[8]. Sin makes us rough, but Christ smoothens us out with His word. This is how we are the light of the world – reflection smoothly and precisely His Light into the darkness of humanity. They may have eyes, But they need the Light.

Cc - When light is reflected in a given object, that’s when we can see. When Christ’s light reflects in us, that’s when more people will come to see Jesus by faith, and give glory to the father in Heaven. Transfiguration Sunday lies between the Light and Glory of Epiphany and the darkness and suffering of Lent. As we move in faith into this period of reflection and learning,  He enlightens us with His Glory, Wisdom and Power, leaving no shadow of doubt that in Him we have our eyes of Faith and the Light of the Word. We can see clearly, perfectly and eternally.

[1]Light – physics. Glen STARK. In:  https://www.britannica.com/science/light “No single answer to the question “What is light?” satisfies the many contexts in which light is experienced, explored, and exploited. The physicist is interested in the physical properties of light, the artist in an aesthetic appreciation of the visual world. Through the sense of sight, light is a primary tool for perceiving the world and communicating within it. Light from the Sun warms the Earth, drives global weather patterns, and initiates the life-sustaining process of photosynthesis. On the grandest scale, light’s interactions with matter have helped shape the structure of the universe. Indeed, light provides a window on the universe, from cosmological to atomic scales. Almost all of the information about the rest of the universe reaches Earth in the form of electromagnetic radiation. By interpreting that radiation, astronomers can glimpse the earliest epochs of the universe, measure the general expansion of the universe, and determine the chemical composition of stars and the interstellar medium. Just as the invention of the telescope dramatically broadened exploration of the universe, so too the invention of the microscope opened the intricate world of the cell. The analysis of the frequencies of light emitted and absorbed by atoms was a principal impetus for the development of quantum mechanics. Atomic and molecular spectroscopies continue to be primary tools for probing the structure of matter, providing ultrasensitive tests of atomic and molecular models and contributing to studies of fundamental photochemical reactions”
[2]Light – physics. Glen STARK. In:  https://www.britannica.com/science/light. The speed of light in a vacuum is a fundamental physical constant, the currently accepted value of which is exactly 299,792,458 metres per second, or about 186,282 miles per second.
[3] 2 Peter 1:16
[4] John 1:14. John by the way makes of light and darkness one of the main illustrations of Jesus’ message and ministry.
[5] John 4
[6] And he adds: “But he permitted those three mentioned apostles especially to see this appearance, in order to guard them against the coming offense of His cross and crucifixion. Yet he accomplished little thereby, for they all were offended with him. Yet this appearance had its advantage after the resurrection, and served to strengthen their faith in Christ, that he was the Son of the living God, and that His kingdom must be regarded in a spiritual sense. The whole holy Trinity appears here to strengthen the believers; namely, Christ in his transfigured form, the Father in the voice, and the Holy Ghost in the bright cloud. Moses and Elias appear in order to testify that Jesus Christ is truly the promised Messiah, according to the law (i.e. Moses,) and the prophets, (i.e. Elias.) Compare Romans 3:21-22, and on the meaning of this transfiguration 2 Corinthians 3:7 ff.” Luther’s Explanatory Notes on the Gospels, pp. 101. Source: http://steadfastlutherans.org/2016/01/luthers-notes-on-the-gospel-transfiguration/
[7] Small Catechism, 3rd Article.
[8]Light – physics. Glen STARK. In:  https://www.britannica.com/science/light  The reflected ray is always in the plane defined by the incident ray and the normal to the surface. The law of reflection can be used to understand the images produced by plane and curved mirrors. Unlike mirrors, most natural surfaces are rough on the scale of the wavelength of light, and, as a consequence, parallel incident light rays are reflected in many different directions, or diffusely. Diffuse reflection is responsible for the ability to see most illuminated surfaces from any position—rays reach the eyes after reflecting off every portion of the surface