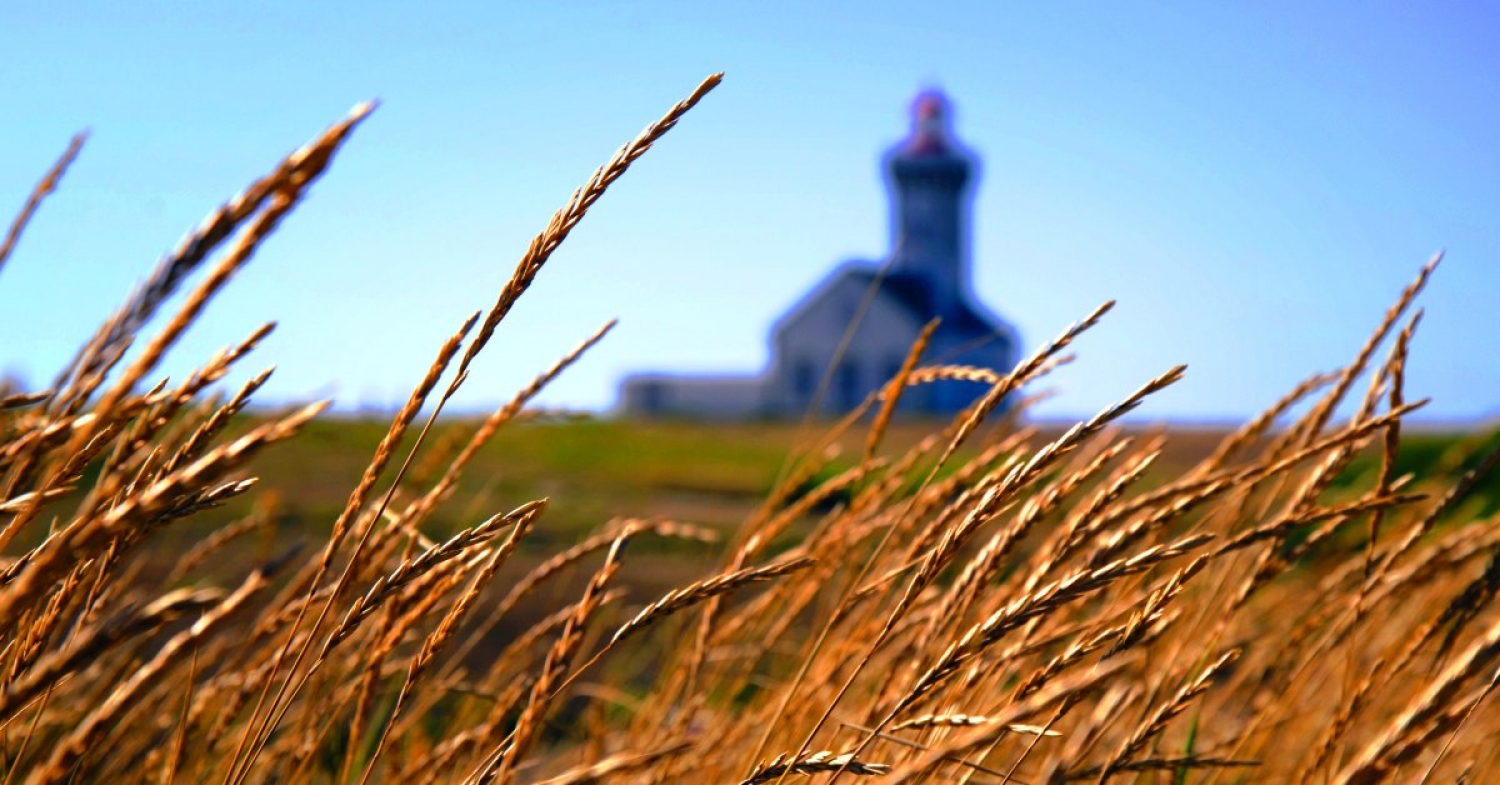 [Jesus] put another parable before them, saying, “The kingdom of heaven may be compared to a man who sowed good seed in his field, but while his men were sleeping, his enemy came and sowed weeds among the wheat and went away.

So when the plants came up and bore grain, then the weeds appeared also. And the servants of the master of the house came and said to him, ‘Master, did you not sow good seed in your field? How then does it have weeds?’ He said to them, ‘An enemy has done this.’ So the servants said to him, ‘Then do you want us to go and gather them?’ But he said, ‘No, lest in gathering the weeds you root up the wheat along with them. Let both grow together until the harvest, and at harvest time I will tell the reapers, Gather the weeds first and bind them in bundles to be burned, but gather the wheat into my barn.’”

Then he left the crowds and went into the house. And his disciples came to him, saying, “Explain to us the parable of the weeds of the field.” He answered, “The one who sows the good seed is the Son of Man. The field is the world, and the good seed is the children of the kingdom. The weeds are the sons of the evil one, and the enemy who sowed them is the devil. The harvest is the close of the age, and the reapers are angels. Just as the weeds are gathered and burned with fire, so will it be at the close of the age. The Son of Man will send his angels, and they will gather out of his kingdom all causes of sin and all law-breakers, and throw them into the fiery furnace. In that place there will be weeping and gnashing of teeth. Then the righteous will shine like the sun in the kingdom of their Father. He who has ears, let him hear.

Grace peace and mercy to you from God our Father and from our Lord and Saviour Jesus Christ. Good Christian Friends. We hear in our Epistle today St. Paul say, “For I consider that the sufferings of this present time are not worth comparing with the glory that is to be revealed to us. For the creation waits with eager longing for the revealing of the sons of God.”[1] Jesus in His parable, especially as He explains it to the disciples who are with Him teaches them and you what That Day will be like when the sons of God, the Children of God are revealed. That Day is The Last Day the Day Jesus returns in Glory and the dead are raised on the one hand to Eternal Life in heaven with God rescued by the grace of God and the blood of Christ or on the other hand raised to Eternal Death, the second death in Hell,[2] that place there will be weeping and gnashing of teeth, due to hearts that refuse forgiveness and desire wickedness. This is epic stuff. There’s nothing more serious than the final destination of your soul and the souls of those you love, even the souls of those you dislike or who dislike or hate you. St. Paul is saying whatever the issue in life might be that you are struggling with right now, lift up your eyes it can’t be compared to what is coming and for those who are in Christ with their faith in Him what is coming is magnificent, full of splendour, beautiful, full of wonder and grandeur. This is the future harvest that Jesus is speaking of when on That Day the angels separate out the wheat from the weeds, the wheat from the tares: Those with faith in Christ who trust in the mercy of God in the face of their sin and those who despise God and lean on their own understanding and works as justification for the lives they have lived and the things they have done.

One of the disciples who stood by as Jesus explained the parable of the wheat and the weeds was St. John who later was granted a vision of That Day which he recorded for you that you might believe and have your faith and hope and trust in Christ Jesus. “I looked, and behold, a great multitude that no one could number, from every nation, from all tribes and peoples and languages, standing before the throne and before the Lamb [that is before Christ Jesus], clothed in white robes, with palm branches in their hands, and crying out with a loud voice, “Salvation belongs to our God who sits on the throne, and to the Lamb!” And all the angels were standing around the throne and around the elders and the four living creatures, and they fell on their faces before the throne and worshiped God, saying, “Amen! Blessing and glory and wisdom and thanksgiving and honor and power and might be to our God forever and ever! Amen.”

Then one of the elders addressed me [that is addressed St. John who recorded this prophetic vision], saying, “Who are these, clothed in white robes, and from where have they come?” I said to him, “Sir, you know.” And he said to me, “These are the ones coming out of the great tribulation. They have washed their robes and made them white in the blood of the Lamb.”[3] Notice that the wheat of the parable today who are also those washed in the Blood of the Lamb are described as a great multitude that no one could number, from every nation, from all tribes and peoples and languages. Within the Christian community there is not to be divisions between us based on tribe, language or nation. When divisions exist for these reasons, especially in the body of Christ within Christianity they need to be addressed, but how?

The challenging thing in this parable is that it is hard at first to distinguish between the wheat and the weeds. At first you can’t tell which is which as they begin to grow and this is why the disciples are cautioned by Christ not to take on the task of immediately pulling up the weeds of the world, those who have satanic seed in their heart. When the workers in the field, in Jesus’ parable, ask their Master if He wants them to gather up all the weeds sown in by the evil one, they are told “no, lest in gathering the weeds you root up the wheat along with them. Let both grow together until the harvest [on The Last Day], and at harvest time I will tell the reapers [the holy angels of God], Gather the weeds first and bind them in bundles to be burned, but gather the wheat into My barn.’” It can take a while before you can tell what’s a weed and what’s wheat in the field: Elsewhere Jesus says, “Beware of false prophets, who come to you in sheep's clothing but inwardly are ravenous wolves. You will recognize them by their fruits. Are grapes gathered from thornbushes, or figs from thistles? So, every healthy tree bears good fruit, but the diseased tree bears bad fruit. A healthy tree cannot bear bad fruit, nor can a diseased tree bear good fruit. Every tree that does not bear good fruit is cut down and thrown into the fire. Thus you will recognize them by their fruits.”[6] We are called to be patient, if you look at little saplings you cannot know, because you are not God, which one will grow to bear fruit and which one will grow and bear nothing, which will have good fruit and which will have bad fruit, in the same way you cannot at first from looking at them tell which will be weeds and which will be wheat, so be patient. Ask yourself is it your work to discern which is which? Is it your personal work? And then remember that ultimately on The Last Day it will be plain and obvious and the angles will do the sorting.

Therefore be careful when the World desires to enlists you to be the judge of your neighbour, ask by what criteria the World wants you to judge them? Is it by the colour of a person’s skin or the sound of their accent, the languages they speak, or the size of their bank account or who their parents are, their level of education or where they went to school? If the World pressures you to blindly judge others based on these things and not on the fruits that individuals bear in maturity then you might be guilty of rooting up the wheat along with the weeds.

Lift up your eyes, from where does your help come from? It comes from the Lord. It is His seed that grows in your heart. He tends His field, He judges between the wheat and the weeds, and it is His mercy that endures forever, His forgiveness that washes away sin, lean on His Everlasting Arms. As you live your life eagerly longing for the return of Christ, be cautious and wary of those who come in the dark of night and sow the seed that brings forth discord, evil, death and destruction. “He who has ears, let him hear.” Amen.