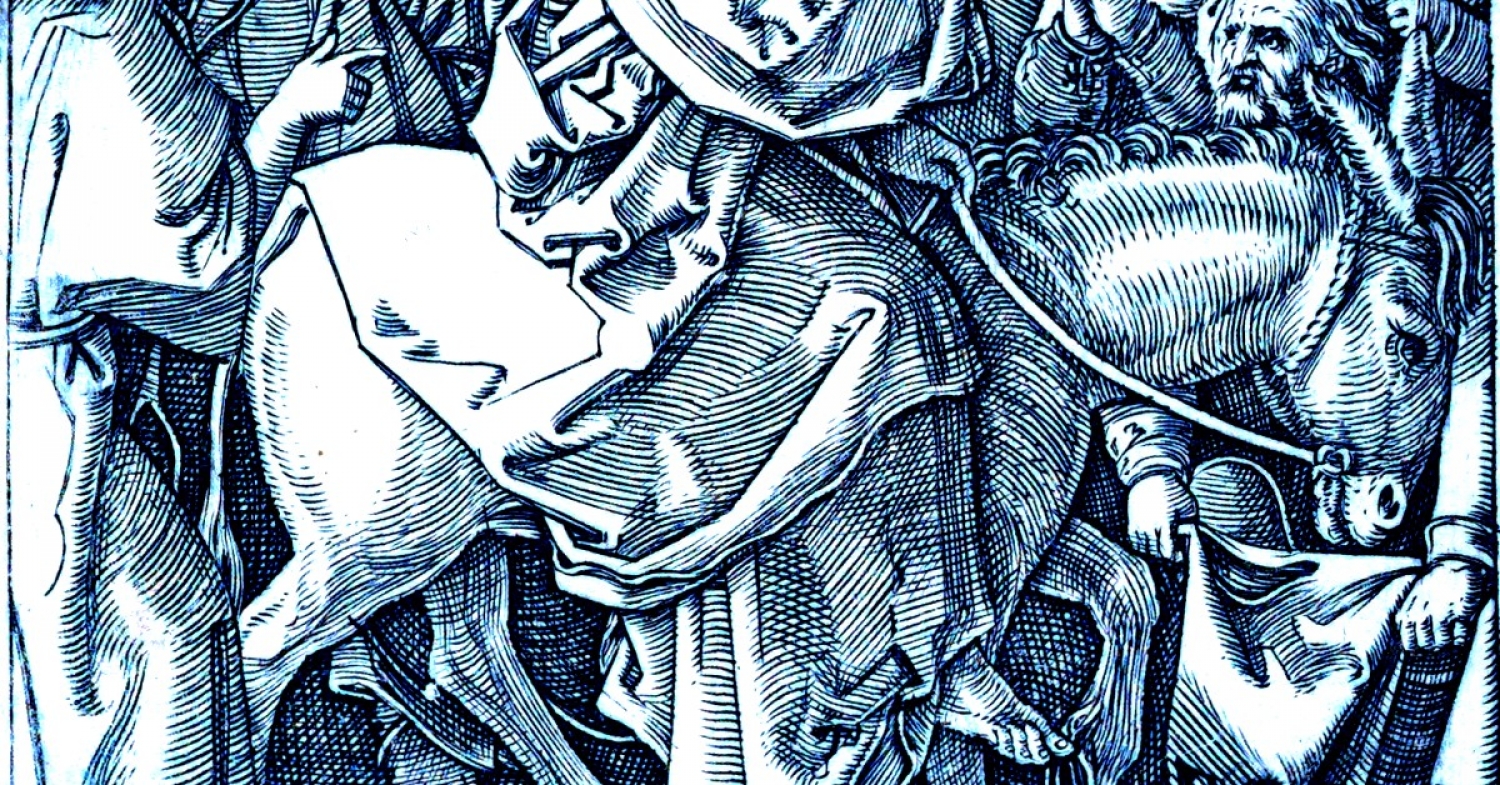 Now when they drew near to Jerusalem and came to Bethphage, to the Mount of Olives, then Jesus sent two disciples, saying to them, “Go into the village in front of you, and immediately you will find a donkey tied, and a colt with her. Untie them and bring them to Me. If anyone says anything to you, you shall say, ‘The Lord needs them,’ and he will send them at once.” This took place to fulfill what was spoken by the prophet, saying,

“Say to the daughter of Zion,

‘Behold, your king is coming to you,

humble, and mounted on a donkey,

The disciples went and did as Jesus had directed them. They brought the donkey and the colt and put on them their cloaks, and He sat on them. Most of the crowd spread their cloaks on the road, and others cut branches from the trees and spread them on the road. And the crowds that went before Him and that followed Him were shouting, “Hosanna to the Son of David! Blessed is He who comes in the name of the Lord! Hosanna in the highest!” And when He entered Jerusalem, the whole city was stirred up, saying, “Who is this?” And the crowds said, “This is the prophet Jesus, from Nazareth of Galilee.”

Grace peace and mercy to you from God our Father and from our Lord and Saviour Jesus Christ. Good Christian Friends. And when He entered Jerusalem, the whole city was stirred up, saying, “Who is this?” And the crowds said, “This is the prophet Jesus, from Nazareth of Galilee.” The ones who followed after and went on before Him, the ones who laid their cloaks on the road so that even the hooves of the donkey upon which He rode would not touch the ground, the ones who cut the palm branches to spread on the road — maybe because they didn’t even have a cloak of their own — shouted “Hosanna!” “Save us!” These people had expectations. They were ready to be saved and they expected Jesus to save them! News of the works and words of this, “Prophet Jesus, from Nazareth of Galilee” had circulated over the previous three years and people would have heard that He teaches with authority, that He casts out demons,[1] heals the sick and the lame, forgives sins and that He even raises the dead: As He had just done in the nearby town of Bethany with Lazarus the brother of Mary and Martha and that Lazarus had been dead for four days, past the point of no return exceeding expectations.[2] So these people calling out, “Hosanna to the Son of David! Blessed is He who comes in the name of the Lord! Hosanna in the highest!,” are both acknowledging, confessing, who they believe Jesus to be, and calling out as ones who expect that He will do some of these very same things in Jerusalem as He had done in Galilee and in other places, indeed as He had done on previous trips to Jerusalem.[3]

Advent is a penitential season with a focus on expectations and this year we back our way into the birth of Christ Jesus, we don’t come at it in a linear fashion. Last week, on the Last Sunday of the Church Year, we heard of Jesus’ crucifixion, His enthronement at the wooden cross of Calvary crowned with thorns on Good Friday at the end of Holy Week; today we back things up as we hear of Jesus’ Triumphal Entry into Jerusalem at the beginning of Holy Week on Palm Sunday; then the next two weeks go a bit further back in time and focus on the public ministry of Jesus with events featuring John the Baptizer; and then on the fourth Sunday in Advent we will go back further and hear in the Gospel Reading the prophetic foretelling of Jesus’ birth spoken by an angel to Joseph the carpenter the man betrothed to the Virgin Mary. So it’s interesting that this year as we look with expectation towards the celebration of the birth of the baby Jesus we start at the apex of the story, Holy Week and the time of His Crucifixion, and then work our way back from those events backing our way into the birth of Jesus.

There is great comfort in knowing what it coming before it arrives. Not everyone enjoys surprises. It shouldn’t have been a surprise to the Chief Priests and the Sadducees and the Pharisees and the Scribes and the Elders of the people that this Jesus would come to Jerusalem for the Passover, everyone was expected to make the pilgrimage. For them their expectation would be more worry than excitement because if this Jesus did do these things that were expected of Him by the people then they would be embarrassed because they themselves could not do these things themselves. It might undermine their authority and upset the apple cart and that would make everything even more complicated with the Governor Pontius Pilot and the Romans.[4] It would have exceeded their expectations if Jesus had just come and quietly celebrated the Passover and gone back to Galilee without doing any of the things the people expected … but that was not to be the case. The first place Jesus went after passing through the gates of Jerusalem on the back of that donkey was straight to the Temple to clear out the money changers, to throw out the ones who were there to exchange Roman coins for Temple currency so the Jews wouldn’t have to use Roman coins to by the animals necessary for the Passover sacrifices.[5] As the crowd who cried out, “Hosanna to the Son of David! Blessed is he who comes in the name of the Lord! Hosanna in the highest!,” expected, perhaps we can say ‘had hoped’ Jesus exercised His authority.

During that week, as expected, as hoped for by many, Jesus taught with authority in the Temple, teaching with parables and fielding questions from His adversaries, He taught about the Resurrection of the Dead[6] and The End of time, of the coming destruction of the Temple, of judgment and forgiveness,[7] of our stewardship in this life and our relationship with government and God and each other.[8] More and more His adversaries saw His teachings as pointing at them,[9] but instead of taking these teachings to heart in repentance and turning to God they dug in their heels and plotted to end Jesus’ life all the more.[10] Apart from those who had a hand in it, did people expect His death to cap off the week? Did the ones who called out “Hosanna!” expect it? Did they think He was in danger? That He would need to be saved from harsh treatment and from death? And even if they did expect these things would they expect that three days after His death the LORD would raise Jesus from the dead that first Easter morning?[11] When they called out “Hosanna! Save Us!” what did they expect to be saved from? What do you need to be saved from today?

If you flip the switch on the wall you expect the light to come on; if you turn on the faucet you expect water to come out; when the sun goes down you expect it to come back up again in the morning; when the snow flies you expect that the heat of summer will return next year. We have many things that we expect, but I had mentioned the idea of hope. We expect that most everyone will live through the next year, but we know that some will die, so we hope that we will be one of the ones to live through the year. And so you see there are some expectations that also involve hope. When we flip the switch on the wall and the light doesn’t come on we hope it’s a burn out light bulb and that it isn’t something more serious, something that would require an electrician. As Saint Paul says, “Now hope that is seen is not hope. For who hopes for what he sees? But if we hope for what we do not see, we wait for it with patience,” and just before these words Paul says, “For in this hope we were saved.”[12] And what hope is this? It is hope of being rescued from the sufferings of this present time, when we as heirs of God the Father, brothers and sisters of Christ Jesus are revealed in Christ to be the true children of God on The Last Day,[13] The Day of the redemption of our bodies[14] The Day of Resurrection from the dead. We confess this hope week in and week out in the words of the Creeds; a hope built on the promises of God. And standing on this promise, revealed to us in God’s Word, in the Scriptures, we expect that He will do this for us as His adopted children: as Saint Paul says, “I am sure of this, that He who began a good work in you will bring it to completion at The Day of Jesus Christ.”[15]

The World says, dead is dead, and that Jesus was not riding into Jerusalem on a donkey to save anyone; He was only riding to His eventual death. The World says that whether you cut the branches or throw down the cloak on the road, that whether you cry out “Hosanna” or not we are all simply riding to our eventual death and after that nothing. The World says, “If the dead are not raised, ‘Let us eat and drink, for tomorrow we die.’” [But Saint Paul in his first letter to the Corinthians says] “Do not be deceived: ‘Bad company ruins good morals.’” [He goes on to say] “Wake up from your drunken stupor, as is right, and do not go on sinning. For some have no knowledge of God.”[16] You dear ones are called to continue growing in the knowledge of God and so your expectations of what God can do and promises to do exceed the expectations of those who cried out “Hosanna!” in our Gospel reading today and far exceed the expectations of the World.

Because of this you know that there is ultimately more to being saved than simply being rescued from this moment or that moment, or this bit of suffering or that bit of suffering, or this trouble or that trouble. When you call out to Jesus “Hosanna!” “Please Save us!” “Save me!” “Have Mercy on us!” “Have mercy on me!” “Give us peace!” “Give me peace!” “Forgive us!” “Forgive me!” that these things are truly guaranteed to you in Christ Jesus and they find their finial fulfillment on The Last Day. Be faithful, do not fall away, do not walk away, do not embrace Worldly expectations that will draw you away from the only one who can truly save you. If something gets in the way between you and Jesus, by the grace of God, go around it, go through it, climb over it but do not be stopped by it, don’t be diverted by it, do not be set off course by it. As Christians we know such things will come in this life, doubts and illnesses and deaths and financial insecurity, in all these things set your expectations on the One who gets you through, the One who is with you, who follows you all the days of your life, the One who hears your cry of Hosanna! and saves you with His precious blood and life, innocently going to His own death with all humility and righteousness to save you from Sin, from Death, the Devil, the World, and even from yourself.