Book of the Month for July 2013: Divine Kingdom, Holy Order: The Political Writings of Martin Luther

The canon of western political theory has long misrepresented Luther’s political thought, mistaking it as a forerunner of the ‘freedom of conscience’ or the ‘separation of church and state,’ or an ancestor of modern absolutism and even German totalitarianism. These misleading interpretations neglect Luther’s central point: temporal government is a gift from God, worthy of honor and respect, independent yet complementary to the purpose and mission of the Church. Spanning Luther’s career as a reformer, the writings in this anthology will demonstrate his resolve to restore temporal government to its proper place of honor and divine purpose.

Dean of Graduate Studies and Professor of Political Science

Jarrett A. Carty offers an inspired collection of the most relevant political writings of Martin Luther into one volume. The volume offers a fascinating study to the history of political thought in the age of Reformation. It is something that contemporary scholars of the sixteenth-century political thought in general and of the Reformation in particular should read.

Jarrett A. Carty, PhD, is Associate Professor in the Liberal Arts College of Concordia University, Montreal, Quebec. His research on Luther’s political teachings has appeared in Interpretation: A Journal of Political Philosophy, The Review of Politics, and the Encyclopedia of Political Theory.

You can order this book On-Line at Concordia Publish House or by contacting our Church Office. 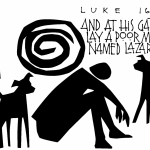