Soon after Joseph Smith, Jr., founded the Mormon Church in 1830, newspaper editors called him “the American Mahomet,” “Modern Mahomet,” or “Yankee Mahomet.” In The American Muhammad Alvin Schmidt has undertaken the challenging but informative task of documenting, discussing, and analyzing over seventy parallels that exist between Smith and Muhammad. He cites valid arguments why parallels between noteworthy individuals in history need to be studied in order to understand why they engaged in similar acts that left major marks in history. This fascinating book provides many facts not commonly known about Joseph Smith and Muhammad and will help readers see and understand how the teachings of these two men contradict biblical Christianity.

Alvin J. Schmidt, MDiv, PhD, is professor of sociology emeritus at Illinois College, Jacksonville, IL, and a fellow of the Society for the Scientific Study of Religion. He is the author of numerous books, including the award-winning Fraternal Organizations(1980); and How Christianity Changed the World (2004).

You can order this book On-Line at Concordia Publish House or by contacting our Church Office. 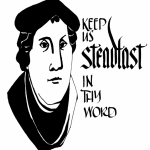