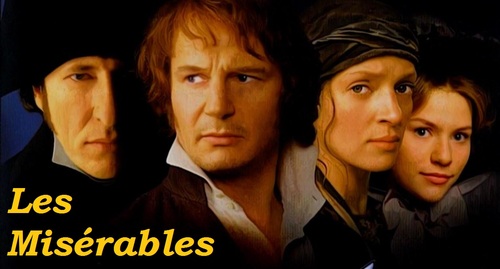 What is: Pop Culture and the Bible, Bible Study?

It's an opportunity for Youth/Young Adults to practice putting their faith to work while looking at pop culture. We generally watch movies and then explore how Scripture intersects with what we've watched. This way of thinking about media can be applied to music, film, literature, television, art, and just about any other form of cultural production. We hope that the people coming to this would become wise consumers of media and be able to apply their Christian faith to whatever they are looking at.

As in the original novel, the storyline follows the adult life of Jean Valjean (Liam Neeson), an ex-convict (paroled following 19 years of hard labor, for stealing bread) pursued by police Inspector Javert (Geoffrey Rush). It was filmed at Barrandov Studios in Prague.

We will watch the movie and then we'll spend some time looking at Law and Gospel and we will also be looking at a variety of Bible passages many of which will come from St. Paul's Letter to the Romans from the New Testament.

Something to get you started, read the words of this hymn from the Lutheran Service Book hymn number 579: The Law of God Is Good and Wise.

our eyes, Shows us the way of righteousness, And dooms to

death when we transgress.

2 Its light of holiness imparts The knowledge of our sinful

of love abound It shows what deeds are His delight And

should be done as good and right.

4 But those who scornfully disdain God's Law shall then in

sin remain; Its terror in their ear resounds And keeps their

5 The Law is good; but since the fall Its holiness condemns us

all; It dooms us for our sin to die And has no pow'r to justify.

6 To Jesus we for refuge flee, Who from the curse has set us

free, And humbly worship at His throne, Saved by His grace