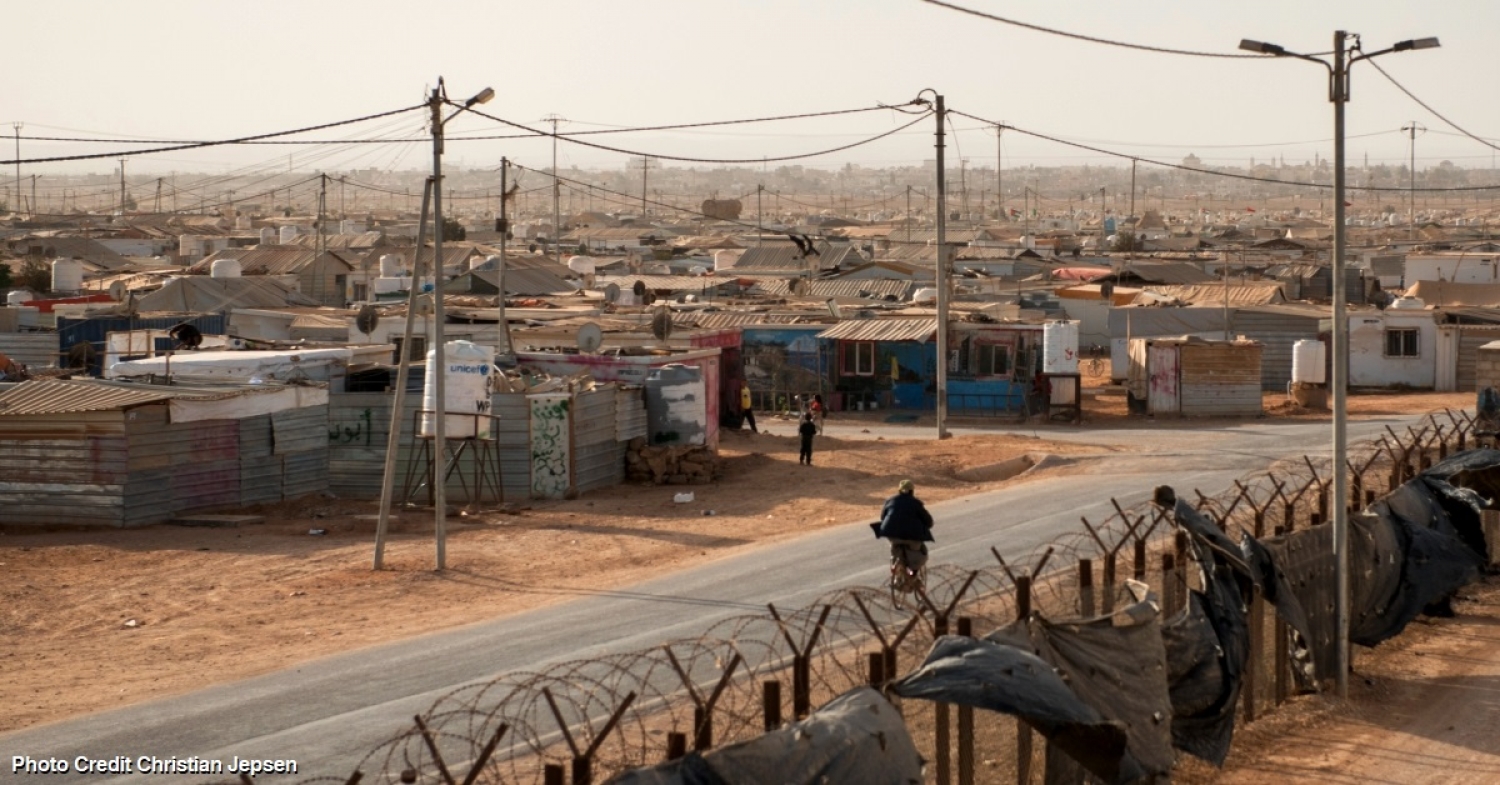 An Oasis of Peace for neighbours in need

In the Western world we imbue the word oasis with a kind of romanticism, however in the Middle East an oasis is more pragmatic. In a parched desert landscape it saves lives and provides valuable food, shelter, and replenishment. For Syrian refugees fleeing from their war-torn country into neighbouring Jordan there is a valuable oasis in the sprawling Za’atari Refugee Camp called “Peace Oasis.” Opened in 2013, it is a safe area within the camp for young people aged 14 to 30 and is, in part, funded and supported by Canadian Lutheran World Relief (CLWR).

Earlier this year, as part of a Global Encounter tour sponsored by CLWR, I visited the Za’atari Refugee Camp in Jordan near the Syrian border, one of five such camps in Jordan with a current population of around 80,000 men, women, and children.

Active in emergency relief, development and refugee resettlement, CLWR is an agency of Lutheran Church–Canada (LCC) and the Evangelical Lutheran Church in Canada (ELCIC). Through this longstanding partnership, beginning in 1946 to help support the physical and resettlement needs of refugees following WWII, its work focuses primarily on international social ministry and not on Word and Sacrament Ministry or missionary endeavours.

The heart of CLWR’s work is rooted in the the Second Table of the Law (Commandments 4-10) in which God’s law calls Christians to love and care for our neighbours in need regardless of their religion, race or affiliations. It also finds its source in the words of Jesus when He calls all people to be impartial in their mercy, “If you love those who love you, what benefit is that to you? For even sinners love those who love them. And if you do good to those who do good to you, what benefit is that to you? For even sinners do the same. And if you lend to those from whom you expect to receive, what credit is that to you? Even sinners lend to sinners, to get back the same amount. But love your enemies, and do good, and lend, expecting nothing in return, and your reward will be great, and you will be sons of the Most High, for He is kind to the ungrateful and the evil. Be merciful, even as your Father is merciful” (Luke 6:32–36). This approach to caring for the neighbour doesn’t change depending on who the neighbour is; so too, Jesus by using the extremes of “those who you love,” and “your enemy,” shows that this call to impartial mercy towards the neighbour is expected regardless of how anyone feels about anyone else, whether they regard their neighbour as friend, enemy or family or even if they feel indifferent in any way. The Christian call to serve others in need is not limited by Jesus but expanded.

In 2011 when protests in Syria, initially inspired by the Arab Spring revolutions sweeping the Arab world of North Africa, quickly became a civil war, CLWR sought ways to respond to the needs of Syrians fleeing their war-torn homeland. In cooperation with the Canadian government, CLWR provided opportunities for Syrians to immigrate to Canada and aided refugees who had fled across the Syrian border into the Hashemite Kingdom of Jordan. Since most Christian Syrian refugees fled to Lebanon with its 40% Christian population, Za’atari is almost exclusively populated by Muslims which means CLWR’s work in Za’atari’s Peace Oasis compound is directed toward Muslims in need of support.

Za’atari is essentially a small city with hospitals, police stations, emergency services, and mosques. Divided into districts which function like neighbourhoods it even has a market that stretches the length of a long avenue playfully named the Champs-Élysée by staff from United Nations High Commissioner for Refugees (UNHCR), who drew parallels to the bustle of Paris’ famous street. The nickname caught on because the word “Champs” in French sounds a lot like the Arabic word for Syrian. Among the 3000 refugee-run businesses are butcher shops and barber shops, even places to buy wedding dresses and almost anything else you might need. These thriving small businesses focus on providing some kind of economic security and normalcy to Za’atari’s population. Most of the refugees here come from rural and farming backgrounds and they hope to return to their land and resume their agricultural way of life when the war in Syrian ends.

The camp, which began as a tent city, has moved out of the emergency phase into a development phase. Families now live in metal structures and have access to 10 hours of electricity a day produced by solar power which the UNHCR hopes to extend to 12 hours. The whole endeavour is a delicate balance. On one hand there is the desire to provide robust infrastructures which ensure a reasonable quality of life, while on the other hand the infrastructure is not intended to be long-term; Za’atari is to remain a camp and not become a permanent city.

Located in District 5 the Peace Oasis complex, run by the Lutheran World Federation (LWF), provides psycho-social support to youth and adults aged 14-30 as well as practical vocational training. Peace Oasis staff facilitate the programs assisted by in-camp volunteers. Since 2015 CLWR has provided $65,000 to help run this important program. The focus of the Oasis is peace-building through music and arts workshops, sports, and through vocational training like sewing and food preparation/catering. The psycho-social support helps young people dealing with trauma to talk about their experiences and produce art that helps them work through some of the aggravated by-products of trauma that affect their lives. As an example, arranged marriages are very common especially for girls and in times of insecurity parents face the temptation to arrange these marriages at younger and younger ages. Participating in drama, games, group role-playing, conflict management workshops and visual art help stem and mitigate issues like early marriage, child labour, and sexual, physical, and domestic abuse. The Oasis also offers a safe location to play soccer and provides facilities for the popular non-violent Brazilian martial arts/dance form called Capoeira. These activities are another effective way of reducing tension and the negative coping strategies associated with psycho-social and physical trauma.

Many find life in Za’atari boring and as the Syrian conflict continues Peace Oasis and other similar initiatives offer engaging and meaningful opportunities for youth to develop negotiating and peacemaking skills while actively confronting their refugee experiences. Simply having somewhere youth-friendly to hang out can be a great help; a place where young people can build friendships amid their displacement is both practical and necessary. While visiting Peace Oasis it was a privilege to taste food prepared by youth developing their catering skills. It was also wonderful to see kids playing soccer with the same joy and energy you might see other kids exude in less troubled regions of the world. One young boy who saw my Canadian flag pin asked if I was from Canada. When I said yes, he beamed with a giant smile.

The early stages of CLWR’s involvement with Syrian refugees in Za’atari focused on hygiene kits, shoes, and sweaters—practical support. As the camp continues moving into a development phase the heart of the work shifts towards helping Za’atari’s refugees prepare for the future when they are replenished, equipped, and able to return home. Hopefully the displaced young people and children who have participated in Peace Oasis activities will return to Syria with traumas that have received healing or, with the help and support of CLWR, have been addressed and talked about in a positive and helpful manner.

The heart of the work accomplished by CLWR, like the Peace Oasis, is rooted in an active response to the grace of God revealed to the world in Christ Jesus, "We have come to know and to believe the love that God has for us. God is love, and whoever abides in love abides in God, and God abides in Him." "We love because He first loved us." (1 John 4:16, 19) When confronted by news of international tragedies Christians are often left thinking things like, “What assistance would I appreciate if I suddenly lost my house, my property, my goods, my honour or even worse a child or spouse.” … “If all I had in the world was my faith and what I could carry with me, and those huddled around me, what, in love, would I readily and happily accept from the hand of another, even a complete stranger, as an act of grace and mercy in my time of need?” Responding to these questions Canadian Christians of Lutheran heritage send their support both in goods and in financial donations to CLWR which helps implement projects like Peace Oasis in the Za’atari Refugee Camp.

It is a great show of love for the neighbour to provide this kind of meaningful presence in a time of such dire need—a Peace Oasis for those escaping the desolation and violence of war.