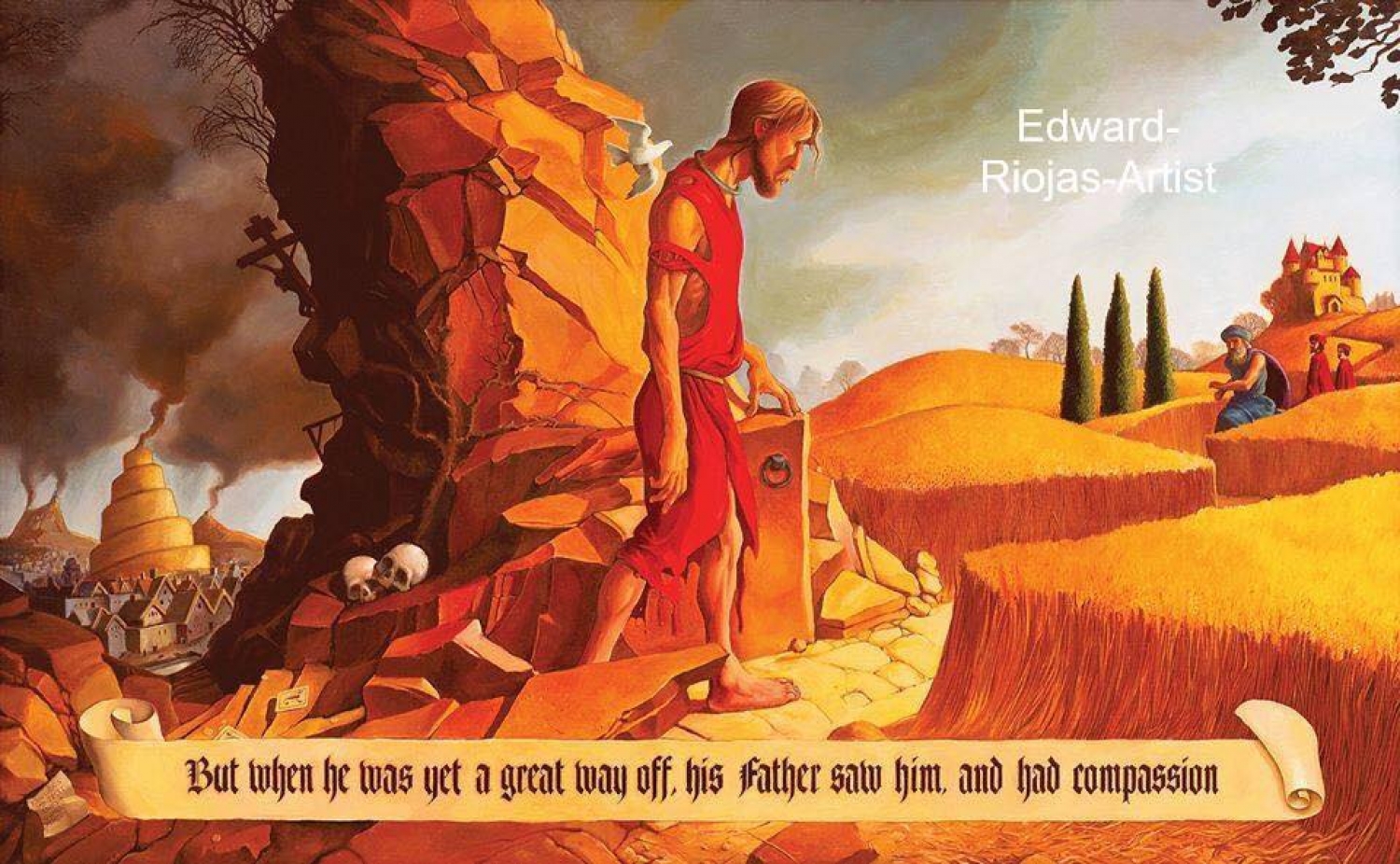 - Two weekends;
- Three Sundays;
- Two salaries per month
- The number of weeks of vacations according to your wish;
- Three desserts per dinner;

Perhaps you would think, "Wow pastor, this is rather exaggerated, isn’t it?" Well, it might be exaggeration, overkill. But I'm following here the style of Jesus. Our Master was not strange to exaggeration, to hyperbole, and in the parable of the Prodigal Son he is again using them to teach His message.

• A child who decides to leave
Is it something for a son to do? You ask for you inheritance; you gather your stuff together and hit the road into the world. You leave your father behind perhaps by himself (once we see no mother in the story) to enjoy life in the most selfish way? This is irresponsibility overkill.

• The Son asks for his inheritance, and the Father gives it to him.
Where was this Father with mind when he grants such request? He meets the request of a son, perhaps only just a late teenager. As if requesting in advance his lot on his Fathers possessions to go into the world wouldn’t be exaggerated enough, the Father simply assents to it? This is an exaggeration of permissiveness from the part of the Father.

• The son converts everything into cash, and then leaves with an excessively full pocket.
The term in the Greek original here, to "put things together", could also mean “turning assets into cash” in the commercial context of the time. It seems logical that he would do that. He was not going to go out carrying a lot of things, it would be better to turn it into cash. Here’s another overstatement, exaggeration: an exaggeration of greed.

• An exaggeration of doom
Then his doom comes in the same proportion. He ends up looking after pigs – one of the world's most unworthy jobs for a Jew (it helps us to understand the impact of this story on the hearers of Jesus). Now, not only he had to look after swine but also eat of their food in order to stay alive. It’s overkill, exaggeration of filthiness, brokenness, sin.

Then the turning point comes. And again there are hyperboles to conduct the plot.

The Son then realizes what he did, what he missed, what he caused, where he was. Repentance comes in. He saw all the abuses, exaggerations, overdoing he had committed and realized how immature, irresponsible he had been. But notice here one thing: he did not exaggerate in repentance. It seems strange to talk about it, but exaggerating in repentance can lead to despair – as we saw with Judas after betraying His savior.

Repentance seems to be a very outdated word in our World. A modern Son would come back with many possible excuses. “My father was too permissive; I had a crisis of anxiety and despair; my friends made me do it; if you don’t try it you don’t know it; stop judging me and mind your own business; I never asked to be born, blame my Father and mother”. And the like.

That’s not what he does though. We read that the son “came to himself” In Greek we hear the expression “he fell upon himself”. Yes, when in sin we need “to fall upon ourselves”. If you literally would fall upon yourself you’ll crush yourself away. Spiritually speaking that is what must happen – our old self needs to be crushed so that it doesn’t start to find excuses or starts to point to others to excuse him-herself, or to start finding reasons why we don’t actually need repentance. We need to fall upon ourselves. For example:

In the family - “yes, many times I speak without thinking things I shouldn’t say. I don’t always give the attention my family deserves. I lie, I dissimulate, I emotionally blackmail. I’m indifferent in so many times. I’ve sinned against the 4th commandment”.
At work – Not generic “I’m sorrys” but things that we really mean. “It was my faul. Yes, my bad, I will try to do better.  I could have done a better job. I sinned against the 7th and 8th commandments”.
In personal life – Especially in the light of the first 3 commandments. “It was my fault. I am not pursuing the best I can. I can leave behind this terrible habit of blaming others. I am not paying attention to the first three commandments as I should. I must stop eating swine food – all the rotten things of the world that damage my faith”.

There is only one way to not exaggerate in repentance though, and it is to trust that there is someone who can forgive what was done wrong. Is it possible? "Yes, Pastor. It is in God." Yes, we know the answer, don’t we? But do we always remember it? Think about the context of Jesus’ parable in the culture of the time. There is this Father who gives his son what he wanted. Suddenly this father realizes he was somewhat stupid in doing so. Now, would he still receive back his son home; a son who despised him, went into the world to satisfy his desires, and spent all the money he had; he engaged in a filthy occupation among pigs – and now comes and simply says “forgive me”? I would bet that a lot of Jesus' listeners should be thinking at that point of the story: "Now comes the just punishment. There is no way this guy would get away for what he did. He’ll get now what he deserves."

Do you hear that? Perhaps in your mind, in your words, or in the word of others? "Oh man, now that went too far. There is no forgiveness for that." This equals to saying: “Thank you Jesus for everything you did on the Cross. That was great, that was wonderful, but it is not big enough to cover this sin here”. As if such a thing would really exist, a sin which is outside of the reach of God’s forgiveness (except for the sin against the Holy Spirit).

The Father receives His Son back. He exaggeratedly runs in his direction, clothes him with the finest clothes, throws a party for him, asks his brother to join them. The Son fell upon himself and was broken into pieces. The Father fully reassembles him back – with the only force that could do it: Grace.

Here we have the wonderful exaggeration: God forgives. God loves. The father accepts us back every single time repentance and faith lead us back to Him. He overkills in His Grace and Love. He exaggerates forgiveness - an exaggeration on which our whole life depends.

Now, it is no exaggeration to say that we can trust him every day; that we can receive in His Word and in the Sacraments the motivation to continue to come back to him as children, not as servants. Or rather, knowing that we are servants because we are His children; servants in love, to Him and to our neighbour. Now it is no exaggeration to place faith in this love, for it is unlimited, exaggerated. It is free!

Still a note on exaggeration would be about the oldest son’s reaction. He exaggerates his anger because he thinks he is more just and more deserving. He doesn’t makes himself impure by working with the swine, he doesn’t spend his father’s money, he abides by the house, he thinks he is, so to say, “more” son of His father that the other Son. This is the audience Jesus is targeting with this parable, as we see at the beginning of chapter 15. People from Israel who thought they were “more” sons of the Father than those “sinners” Jesus was hanging out with. Then the Saviour puts forth three parables to teach them htat, in the way of the Law, they would be “worst sinners” than the sinners, that the prodigal son, because they were refusing to place faith in the Messiah, the Son of God. But in the way of the Gospel, He was teaching that exaggerated love, forgiveness, salvation are for all. For by faith every child of God is equally exaggeratedly loved by Him.

Cc - No matter how much we exaggerate, the love of God is always greater. "Where sin abounded, grace did much more abound," says Paul. So, let's sin to have more love? No, let's live happily as children, under the love of God, so that it never leaves us and that it shines through us on many. Having a Father like this is nothing short of and exaggeration, way better that money, vacation, weekends or dessert: it is and exaggeration of joy, full life, forgiveness and love.