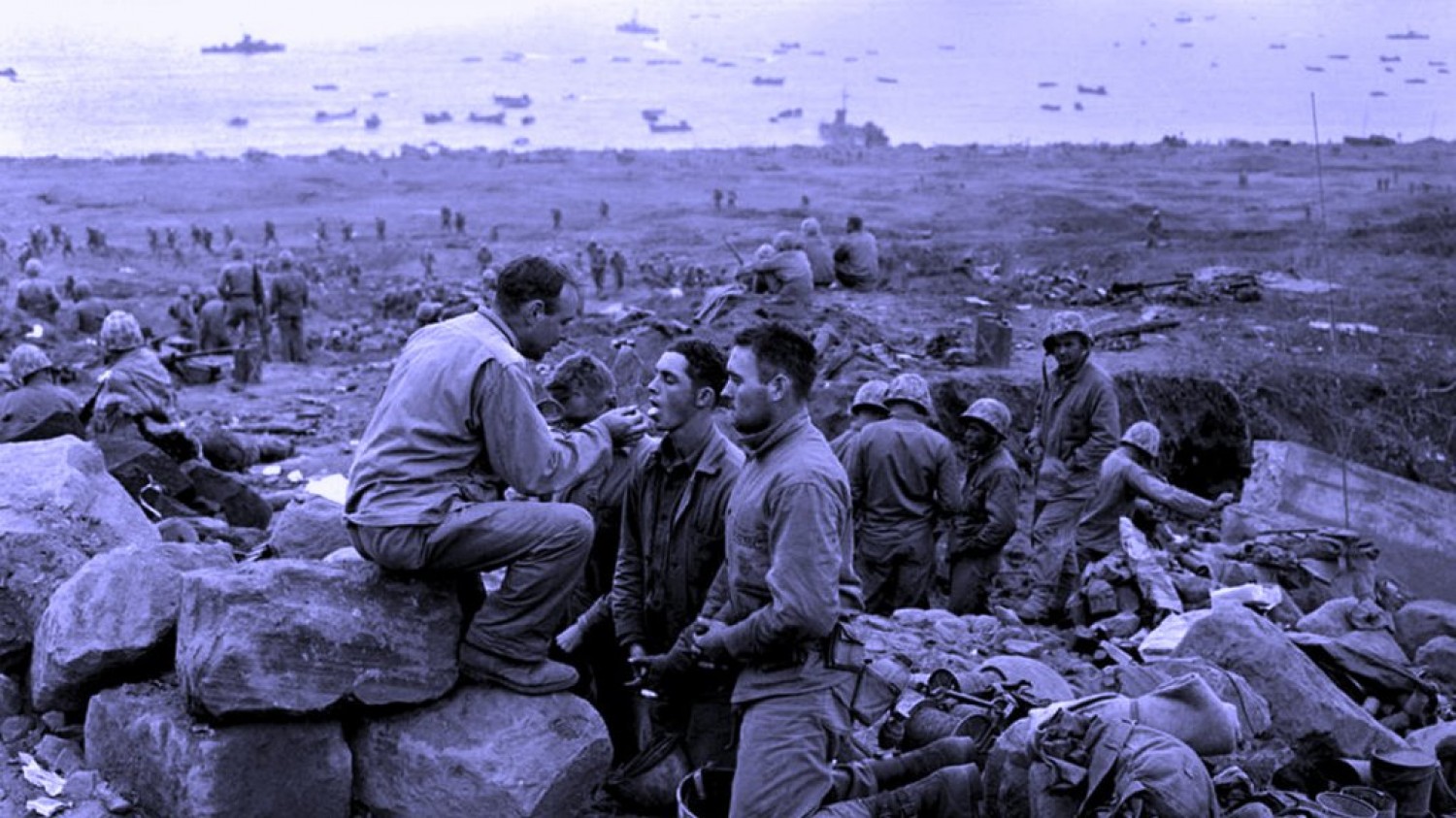 [TO THE CHOIRMASTER: WITH STRINGED INSTRUMENTS. OF DAVID.]

Hear my cry, O God,
listen to my prayer;
from the end of the earth I call to You
when my heart is faint.
Lead me to the rock
that is higher than I,
for You have been my refuge,
a strong tower against the enemy.
Let me dwell in Your tent forever!
Let me take refuge under the shelter of Your wings!

For You, O God, have heard my vows;
You have given me the heritage of those who fear Your name.
Prolong the life of the king;
may His years endure to all generations!
May He be enthroned forever before God;
appoint steadfast love and faithfulness to watch over Him!
So will I ever sing praises to Your name,
as I perform my vows day after day.

Grace peace and mercy to you from God our Father and from our Lord and Saviour Jesus Christ. Good Christian Friends. Saint Paul in 2 Timothy says, "I have fought the good fight, I have finished the race, I have kept the faith."[1] Psalm 61 is a soldiers prayer. When Saint Paul writes "I have fought the good fight," it's about a struggle not fought with fists and swords and armies. When David writes Psalm 61 it is about more than the battle at hand it is also about something bigger.

"Not only to me but also to all who have loved His appearing." In Advent we look to the appearing of the Lord, we remember His appearing that first Christmas when He was born of the Virgin Mary, we also look forward to the second Advent of Jesus when He will come in glory on The Last Day. There is another Advent that we look forward to. If we are not alive on The Last Day, if we should die before That Day, we look forward to the Advent of Christ Jesus when He comes to us on our death bed to take us to Himself as He promises in John 14, when He says, "if I go and prepare a place for you, I will come again and will take you to Myself, that where I am you may be also."[3] For the believer who faces death on the battle field this promise is very important, for the Christian on their death bed this promise is very important. Advent then is happening every day, it is not simply a season of the church year, there are always Christians who have their eye, like Saint Paul, focused on Christ's coming to them. There are always believers who have their eye, like King David, focused on Christ's coming to them. If you die in the mud of the battlefield or in the linen sheets of the hospice house bed makes no difference, either way we pray, "Hear my cry, O God, listen to my prayer; from the end of the earth I call to You when my heart is faint." I am being poured out, the time of my departure has come. Rescue me!

Facing down that moment, where does our help come from? Where do we train our eyes to look in the face of death? In the face of danger or in the face of suffering? David in Psalm 61 says, "Lead me to The Rock that is higher than I," this is where you start to find Christ Jesus in this Psalm. Another way this can be translated is, lead me, "onto the rock that is too high for me to climb up on by myself."[4] In the immediate moment it may simply be the thing right in front of us that seems impossible. The thing we've never done before, the place we can't seem to reach. In Psalm 18 David says, "For by You I can run against a troop, and by my God I can leap over a wall."[5] Is Psalm 61 a Psalm about capturing the high ground? Is it only about capturing a tactical objective? Or is there something more at work in David's Psalm?

Spiritually keeping the Law of God perfectly, without fault, is likewise a place too high for me. On my own I'm not spiritually righteous enough to leap that wall. By my own strength I cannot climb it. On my own I cannot get up onto it, I keep falling down. But who is there? Up on that rock? Who is it? More than that who is that Rock? Christ Jesus. The one David longed for. The one who kept the Law of God that David failed to keep. The one who at Golgotha, the place of the Skull, that rock of Calvary, was crucified in David's place, in my place, in your place. When David prays, "Lead me to The Rock that is higher than I," He prays, "Lead me to the Saviour of the Nations, to Christ Jesus, who is higher than I." The very one who is without fault, the one who is Holy, were I am not. In these word David prays, and puts this prayer in the mouths of the soldiers of Israel, in the mouths of Old Testament Believers, in the mouths of Christians, 'Lord help me today, help me in the hour of my death, help me on The Last Day!" Lead me to Jesus. In Advent we pray, "lead me to the manger with the shepherds, with the Wise men, with the angels, lead me to Christ Jesus born in Bethlehem. Lead me to the celebration of Christmas! Then O Lord Lead me on, till my rest is won ... Lead me to my last day, lead me to The Last Day."

Where else can Jesus be found in Psalm 61? This prayer is a soldiers prayer, and in it the soldier is encouraged to pray to the Lord for the king. In it the soldier prays for king David, eventually for David's son king Solomon, and then in time for other kings; as the Psalm get's used liturgically in the life of the believer, in the life of the soldier. we pray for our Queen Elizabeth who wears the maple crown and one day we will pray for her son Charles when he ascends the throne and is crowned king of Canada ... but all of these prayers only point to the King of kings and Lord of Lords, to Jesus the Christ. Jesus, The Son of God, crowned King of the Jews with a crown not of maple leaves but of thorns, a crown He wore at the Cross in His crucifixion. In the midst of Psalm 61 David makes this prayer for the king his own prayer, which is odd? or is it? David prays, "Prolong the life of the king;" This is not self serving untimely David prays blessings upon the coming Jesus. Prophetically David prays about Jesus' resurrection and ascension, David prays for Jesus' eternal crown.

In the Gospel of Saint Matthew this Relationship between King David and Jesus comes up. Listen to what Saint Matthew records and think on Psalm 61. Saint Matthew writes, "Now while the Pharisees were gathered together, Jesus asked them a question, saying, “What do you think about the Christ? Whose son is He?” They said to [Jesus], “The son of David.” [Jesus] said to them, “How is it then that David, in the Spirit, calls [the Christ] Lord, saying,
“‘The Lord said to my Lord,
“Sit at my right hand,
until I put your enemies under your feet”’?
If then David calls Him Lord, how is [the Christ David's] son?” And no one was able to answer [Jesus] a word, nor from that day did anyone dare to ask [Jesus] any more questions."[6] What did John the Baptizer say in this last Sunday's Gospel reading, which we heard again tonight? John described Jesus saying, "He who is coming after me is mightier than I, whose sandals I am not worthy to carry."[7] And so it is with King David, David looks past himself, past his son, and his son's sons to the one who was to come. Here in Psalm 61 you see David in prayer trusting the promise that God had earlier given David when God had said to David, "When your days are fulfilled and you lie down with your fathers, I will raise up your offspring after you, who shall come from your body, and I will establish His kingdom. He shall build a house for My name, and I will establish the throne of His kingdom forever. I will be to Him a Father, and He shall be to me a Son. ... your house and your kingdom shall be made sure forever before Me. Your throne shall be established forever.’”[8] So when David prays, "Prolong the life of the king; may His years endure to all generations! May He be enthroned forever before God;" David is rubbing the promises of God into God's ears and the promise is, the promise of the Advent of Christ Jesus - the King of kings and Lord of lords.[9] David is praying to God, saying, "Send us this King! Bless Him as You have promised to bless Him!"

As David prays for help for his present trouble, in Psalm 61, David points to the help that he'd already received from the Lord in the past: This is the prayer he gives his soldiers, it is the prayer he gives you, a reminder to look to God for help based on the help God has already given. You hear this in the prayer of Psalm 61 when David writes of the Lord saying, "for You have been my refuge, a strong tower against the enemy." When someone like Saint Paul writes, "I have fought the good fight, I have finished the race, I have kept the faith." He did so not by himself, Paul didn't do all of that by himself, David didn't fight the good fight alone either, and neither do you. We fight the good fight, we run the race, we keep the faith in the shadow of God's wings, under His protection, under the outstretched arms of Jesus nailed to the cross, in the refuge of the Rock of Ages, hid away in the cleft of Christ Jesus' pierced side, Held in His Hand. For "You have been my refuge, a strong tower against the enemy." You fight the good fight, you run the race, you keep the faith as one set up upon the Rock that is too high for you to climb onto by yourself. As one set up on Christ Jesus! When we as Christians know this, when we trust this, then we with David can pray, "[I will ever] sing praises to Your name, as I perform my vows day after day."

If today is your last day, if tomorrow is your last day, if your last day is long from coming you can look with a heart that yearns towards the Advent of your coming king, your Rock, your Salvation. He comes to you this night in Holy Communion and He will come to you in your hour of greatest need. In the mean time, day after day work diligently in all your responsibilities in this life, turn to the Lord in Prayer, remember what He has already accomplished for you, and keep your eyes on Him as you prepare for His second Advent, as you are lead to Him, as He leads you home. Amen.