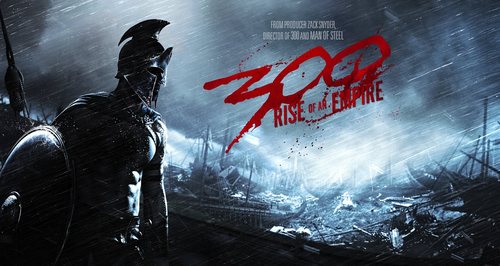 Last part of the radio interview covers 300: Rise of an Empire the first part covers Divergent

300: Rise of an Empire is neither prequel nor sequel, has a lot of things going on in it, and that's not always a good thing. So what is it? Since the storyline in the first 300 movie happens concurrently with part of the unfolding story presented in 300: Rise of an Empire,what viewers get every once in a while is a sort of "meanwhile back at the ranch" segue that lines up with the events of the first 300 film. Withnew film providing back story for the character Xerxes (Rodrigo Santoro) the Persian Emperor, does this makes it, in part, a Xerxes origin story? It also features two other central characters: Artemisia (Eva Green) a naval commander and ally of Xerxes during the Greco-Persian Wars, and Themistocles (Sullivan Stapleton)an Athenian politician and warrior.

In terms of storytelling the film is less direct than 300, and between the various character threads and weaving in the original film’s story, 300: Rise of an Empire ends up feeling bloated. This is surprising considering that the movie’s running time is only 102 minutes. Additionally, the historical accuracy of the events portrayed in the film are frequently incorrect, not so much in the small details—as is more common in film adaptations of historical events—but rather in the broad brush strokes which paint the overarching story. So often it's the big details that are wrong, which leads to the question: "Why are they wrong?" The likely answer is that the film is using these historical personages and events as a springboard into a graphic-novel-style war/action film with more interest in story than history. As is often the case in Hollywood, if viewersare interested in this or any other related historical period it would be advisable not to rely on this film for facts. The film also disregards the laws of physics in many places and uses 'speed ramping' with the same frequency J.J. Abrams used 'lens flares' in 2009's Star Trek.

In a nutshell, the story is about Xerxes’ desire to crush the Greek city states and the city states’ opposition to the Persian Emperor's advancing army. The title, 300: Rise of an Empire is a bit of a play on the events the film presents to create dramatic tension, which for most viewers will be in the question: 'Which Empire is rising?'

What are Christians to think about in connection to this film. One important detail is that Xerxes, or Ahasuerus, is a person found in the Bible. The first name, Xerxes (which the film uses), is his Greek name; the second, Ahasuerus, is the name given to him by the Jewish people. Xerxes/Ahasuerus is found in the book of Esther and the events of 300: Rise of an Empire are generally understood as happening between the end of chapter one of Esther and the beginning of chapter two.

The Bible doesn't talk about how Xerxes becomes king it simple starts the book of Esther with "Now in the days of [Xerxes] who reigned from India to Ethiopia over 127 provinces…" The Bible also doesn't recount the events of this film or any events in Greco-Persian wars. As a result Christian viewers seeking to determine whether the Xerxes depicted in 300: Rise of an Empire is anything like he's depicted in the Bible can’t compare either the events of the film or the historical record of the war with Scripture. What viewers can do is ask how the film and Scripture generally depict Xerxes as a person. Does the Bible present him as a giant, ripped, body-builder with a deep booming voice bent on revenge at all costs? Does he come across as a villain and/or anti-hero of some kind? Perhaps it's good to start by looking at how the film deals with Xerxes.

In the film, Xerxes' father, Darius I, is killed dramatically by Themistocles, the Athenian politician and warrior. He shoots an arrow at Darius from the seashore onto the ship where both Xerxes and his father Darius are observing the battle at Marathon. This is not historically accurate. Darius didn't die in that battle. In fact he wasn't even there but died after the battle while preparing to personally fight a re-match with the Greeks. Also, Xerxes and Darius would not have been at any battle together because the Persians had the practice of naming heirs before a major offensive then keeping them separated in the same way heads of state and their successors today are not generally on the same aircraft. The film greatly compresses time to speed the narrative along. For example, historically the battle of Marathon happened in 491 B.C. and Darius died in 485 B.C. Xerxes takes his time preparing for war and sets forth to fight the Greeks in 481 B.C.[1] In the film all this happens in a short span of time with little indication that a decade is passing. The writers of 300: Rise of an Empire fabricate Darius' death because one of the central themes the film develops is revenge and the story works better if Xerxes is there when his father Darius is cut down in battle.[2] It works even better if Darius is killed by another of the central characters, Themistocles, and works better still if it all happens quickly. This isn't to say the Persians had no historical desire to seek revenge, it just plays better on film if it's a burning hot revenge and not a calculated decades-long slow-burning revenge.

Added to this fabrication is another which history doesn't bear out. As mentioned before, the film showsthe origin story of Xerxes. The film makers include a sequence where the young Xerxesis changed from a fit, handsome, young prince into a massive ripped, body- builder of a 'monster.' The first 300 film didn't go into this detail, and what 300: Rise of an Empire presents is a combination of things. On the one hand his transformation occurs because Artemisia manipulates Xerxes' father's last words at his death and convinces Xerxes he personally needs to be a "god" king to deal with the Greeks. On the other hand, from a comic book point of view, Xerxes is shown going through a transformation something like Peter Parker being bit by a radio-active spider or Dr. Bruce Banner being shot through with gamma-radiation. The result is physical transformation. At one point in a voice-over the viewer hears this transformation described like this, "He [Xerxes] surrendered himself so completely to power so evil and perverse that as he emerged no part of a human man survived." In the film he emerges from a sort of pool in a cave he's found while wandering in the wilderness grieving his father's death and boiling over with rage.

Christian viewers will quickly see a sort of inversion of Christ's baptism in the Jordan River.[3]There, Jesus is anointed for the task of salvation, whereas Xerxes is being self-anointed for evil and war. Where Jesus is confessed to be "at the same time both God and man"[4] Xerxes emerges from the waters with no humanity left in him. The difference here is that Xerxes in 300: Rise of an Empire is a villain and this helps establish him in that role. Christian readers familiar with him from the book of Esther will remember Xerxes as just a man not a god. In Esther, Xerxes is also ultimately an individual who plays a pivotal part in saving the Jewish people from a planned holocaust[5] — one of many benevolent foreign kings God uses to preserve the promise of the coming Christ by saving the descendants of Abraham from their enemies and sheltering them from destruction.

While the Bible describes Xerxes living an opulent and impressive life,[6] and while Herodotus the Greek historian describes him in similar terms, even at times reporting how Xerxes was mistaken by some country folk to be the Greek god Zeus,[7]300: Rise of an Empire goes a step or two further taking extreme artistic licence, something inflicted upon all the film’s central characters each liberally pumped up to anaggrandized level far beyond anything recorded in history.

In the midst of all the blood and over-epic battles there is one small redeeming point in the film. With the first film focusing on the Spartan's and their pre-occupation with glory found in attaining a “good death” on the battle field, 300: Rise of an Empire shifts that focus by turning the story towards the Athenians. They are less hawkish than the Spartans and find less glory in a battle field death. Their fighting is motivated more by freedom than glory and they are depicted as having no relish in the death of their countrymen. Ultimately this makes Themistocles and the Athenians a little more relatable formost viewers.

This film deserves its hard R/18A rating; it is in no way whatsoever appropriate for children and even many adults won't seek to see it. There is a copious amount of violence and, while it is presented in a way closely approximating the graphic novel visual format which highly stylizes its violence, 300: Rise of an Empire still reads as violent when viewed on the big screen. So, while stylized, the violence in the film is not cartoonish but brutal. This is not the only reason the movie garners a hard R rating. It also has some very strongly-presented scenes of sexuality which are likewise violent and in one case weird. There are other instances in the film that highlight the brutal nature of sexual abuse in wartime.

Some people loved 300 when it came out in 2006 and wanted more. 300: Rise of an Empire gives them more, but sometimes more is not always a good thing. As an execution of the graphic novel style and a visual film representation of the graphic novelist Frank Miller's work 300: Rise of an Empire is largely successful. Past that, the film falters and in some places falls down in an epic way that befits the epic nature of the film itself.

[2] Incidentally Darius I is the king from the familiar Biblical account of  Daniel and the Lion's Den found in the Book of Daniel, chapter 6.