More / Book of the Month / Sermon Christmas Day, 2013/ Vicar James Preus/ Jesus Gives Us The Right To Be Called Children Of God/ John 1:1-18 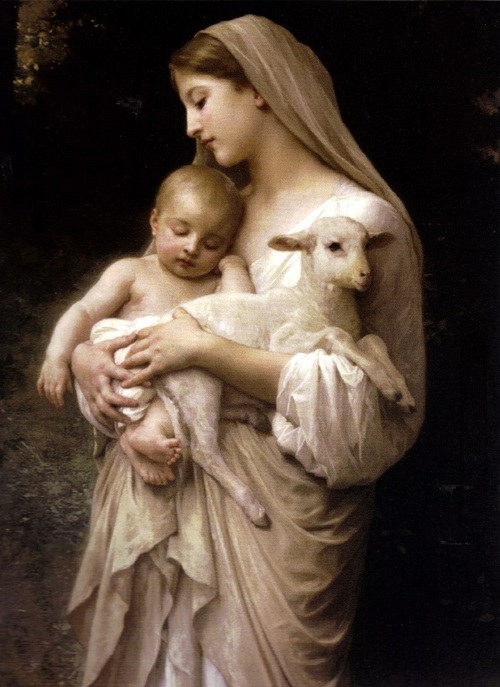 9 The true light, which gives light to everyone, was coming into the world. 10 He was in the world, and the world was made through him, yet the world did not know him. 11 He came to his own, and his own people did not receive him. 12 But to all who did receive him, who believed in his name, he gave the right to become children of God, 13 who were born, not of blood nor of the will of the flesh nor of the will of man, but of God.

14 And the Word became flesh and dwelt among us, and we have seen his glory, glory as of the only Son from the Father, full of grace and truth. 15 (John bore witness about him, and cried out, “This was he of whom I said, ‘He who comes after me ranks before me, because he was before me.’”) 16 For from his fullness we have all received, grace upon grace.  17 For the law was given through Moses; grace and truth came through Jesus Christ. 18 No one has ever seen God; the only God, who is at the Father's side, he has made him known.

Merry Christmas dear children of our Father in Heaven!

“In the beginning was the Word and the Word was with God and the Word was God.”  What a conundrum! I do not believe there exists a more profound riddle in the entire world.  The “Word was with God and the Word was God.”  Which is it?  Is the Word with God or is he God?  Both.  The Word is the Only-Begotten Son of God.  The Evangelist John gives the Son of God the title “The Word.”  This title describes the relationship between the Father and the Son as the Father and the Son have been in a mysterious conversation from eternity.  The Father and the Son have existed from eternity.  There has never been a time that the Father or the Son did not exist.  The Father did not create the Son.  Everything that was made was made through the Son, so the Son could not be made.  The Father begets of the Son.  The Son receives his divinity from the Father.  Yet, the Son has always been God.  So the Son is born from eternity from the Father.  In addition to this, the Father is not the Son and the Son is not the Father. They are distinct Persons.  And they are both God.  Yet, there are not two gods, but one God.  The Father is God, the Son is God, and the Holy Spirit is God, yet there are not three gods, but one God.  These statements are impossible to understand, yet we as Christians confess them by faith.  We confess in the Nicene Creed: “I believe in one God…in one Lord Jesus Christ, the only-begotten Son of God, begotten of His Father before all worlds, God of God, Light of Light, very God of very God, begotten not made, being of one substance with the Father; by whom all things were made.”  So, by faith we believe that the Word (the Only Begotten Son of God) was with God and was God from the beginning.

Our birth is quite different from the Son of God.  We were not begotten of our father from eternity nor do we share the exact same substance with our father.  We have both a father and a mother.  We all were begotten of our respective father at a certain time.  And we were also born of our respective mother at a certain time and place. There was a time when we did not exist.  We were all begotten and born according to flesh and blood.

In addition to receiving our parents’ genetic code we also inherited sin from our father.  King David laments in Psalm 51: “Behold, I was brought forth in iniquity and in sin did my mother conceive me.”  The Apostle Paul writes: “By the one man’s disobedience the many were made sinners.”[1]  And also: “The natural person does not accept the things of the Spirit of God, for they are folly to him.”[2]  We sin because we are sinners.  Just as an apple tree produces apples, we sinners produce sinful thoughts, words, and actions.  And as surely as our children inherit our genes, they inherit our sin.

This was not always so.  Everything was made through the Word, the Son of God.  Nothing was made without him.  Everything God made was perfect.  God made humans perfectly as surely as he said, “Let us make mankind in our own image.”[3]  Because God created Adam and Eve in his image, they were truly his children.  They did his will.  It pleased them to work in the garden.  God gave Adam and Eve everything they could ever desire.

Just a few decades ago there was a young woman from California.  Her father was very rich.  Anything she wanted, she could get, because she was the child of a rich man.  But one day this young woman was kidnapped by a criminal group.  A few months after her capture the young lady proclaimed that she had joined the same gang that kidnapped her!  She rejected her parents and former life and embraced the gang.  In the following months she even participated in armed bank robberies.  That’s right.  If this young woman were returned home to her father, she would have been given anything she wanted.  Yet she broke the law with a bunch of thugs and robbed banks.  Even after her arrest and rescue from the gang of bandits, she continued to support the group and call them her brothers and sisters and she served a jail sentence for her crimes.

This is a true story.  The woman’s name is Patty Hearst.  She was captured by the Symbionese Liberation Army on February 4, 1974.  The bond she formed with her captors has widely been considered a textbook example of Stockholm syndrome.  Stockholm syndrome is a psychological phenomenon when a victim forms a bond with his or her abuser and displays feelings of sympathy toward him.  Often times when victims suffering from Stockholm syndrome are reunited with their true family, they have difficulty becoming emotionally reattached.

This phenomenon is very similar to the condition of us humans.  The world was made through the Word, who is also the Light of man.  Yet Darkness, who is Satan, took the world and all humans in it captive.  When the Light shines in the darkness, the Darkness does not comprehend it.  The Darkness cannot understand the Light.  When the Light came to his own people, the ones whom he made, they do not receive him.  In fact, the world, which is made through him, does not know him.  The world and all in it have become like their captor, Darkness. Jesus tells the Pharisee Nicodemus, who met him at night under the cover of darkness: "the Light has come into the world, and people loved the Darkness rather than the Light because their works were evil.”[4]

We do not entirely know the mysterious conversation the Father and the Son have been having from eternity, which gives the Son the enigmatic title ‘The Word.’  However, God’s Word reveals to us a sufficient portion of this conversation: “For God so loved the world, that he gave his Only-Begotten Son, that whoever believes in Him shall not perish, but have eternal life.”[5]

And so it began.  The Word, who was born from eternity from the Father, takes on a second birth.  As the hymnist expressed it: “Veiled in flesh the God-head see, Hail the incarnate Deity!  Pleased as Man with man to dwell, Jesus, our Immanuel!”[6]  The Apostle Paul writes: “In him dwells all the fullness of the Godhead bodily.”[7]  And we confess in the Nicene Creed: “Who for us men and for our salvation came down from heaven and was incarnate by the Holy Spirit of the virgin Mary and was made man.”

Before his birth the Angel told Joseph: “you shall call his name Jesus, for he will save his people from their sins.”[8]  Jesus’ name means, “The LORD Saves.”  This is how the Father and the Son decided to save the World.  God would not let Darkness keep his people captive and turn them against him.  The Divine Word took on a human body, soul, and will.  God became our brother in every way, yet being born of a virgin; he did not inherit the sin that plagues us.

God knew that his own would not receive him, as he spoke through his prophet Isaiah: “He was despised and rejected by men; a man of sorrows, and acquainted with grief; and as one from whom men hide their faces he was despised, and we esteemed him not.”[9]  Yet this is the very purpose for which the Word came to us in the flesh.  Isaiah further prophesies: “Yet it was the will of the LORD to crush him; he has put him to grief; when his soul makes an offering for guilt, he shall see his offspring, he shall prolong his days.”  The Son of God became flesh, because God had to crush him for our sins.  And God promises: “by his knowledge shall the righteous one, my servant, make many to be accounted righteous.”  The one who is the radiance of the glory of God and the exact imprint of God’s nature became a servant.  He took on our body and soul, so that he could be punished for our sins in our place.

And God shares with us more from this eternal conversation between the Father and the Son.  He tells us: “But to all who did receive him, who believe in his name, he gave the right to become children of God, who were born, not of blood, nor of the will of the flesh, nor of the will of man, but of God.”

According to our first birth of flesh and blood we are captives of the Darkness and we do not know God.  However God grants us a second birth that is as marvelous and beneficial to us as the second birth of God the Son.  As Jesus was conceived by the power of the Holy Spirit in the Virgin’s womb when God’s messenger Gabriel spoke God’s Word, we were born again by the power of the Holy Spirit as God’s messenger spoke God’s Word when we were baptized in the name of the Father, and of the Son, and the Holy Spirit.  And as Mary accepted the honor of being mother of God by faith, by faith we receive our identity to become children of God.  Yet, as we did not choose to be born of the flesh, we did not choose to be born a second time of the Spirit.  We are not born again as children of God by our own will, or works done according to our flesh.  We are born as children of God by the Will of God.  He creates faith in our hearts through the power of His Word and the Holy Spirit.  And as the Angels in heaven rejoiced with praises to God at the news of Jesus’ birth, they rejoice as God gathers his children together to him.

Through whom the sinful world is blest!